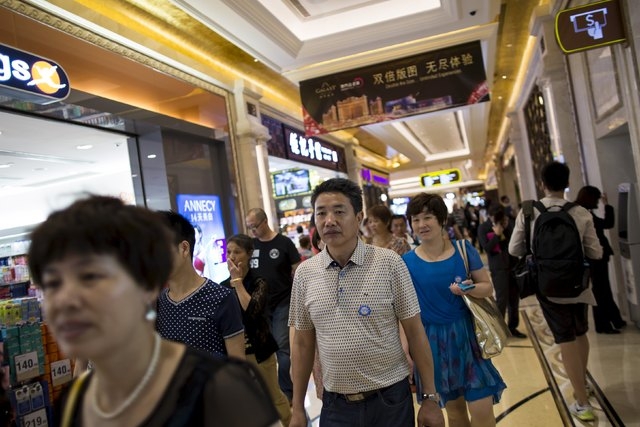 Tourists walk inside a shopping mall at Galaxy Macau resort in Macau, China, on Wednesday, May 27, 2015. As revenue plummets at China's only legal gambling hub, global casino operators have a new mantra -- what happens in Vegas, must also happen in Macau. (Tyrone Siu/Reuters)

Macau’s casino industry has experienced 12 straight monthly gaming revenue declines — and more are on the way.

Casinos in the Chinese gambling enclave collected $2.5 billion from gamblers in May, a drop of 37 percent compared with the same month a year ago, Macau’s Gaming Inspection and Coordination Bureau said Monday.

The dip was the eighth straight double-digit percentage decrease and the fourth-straight month the market had declines of 30 percent or higher. In February, Macau gaming revenue declined 49 percent, an all-time single-month record.

Union Gaming Group director Grant Govertsen, who is based in Macau, said the trend suggested “a baseline” had been established. But he cautioned that a potential government-mandated, full-scale smoking ban in Macau could further erode the market.

“We aren’t expecting further material downside from here, smoking ban notwithstanding,” Govertsen said. “However, we acknowledge that trends could still be choppy for some number of months to come before we see any breakout to the upside.”

Over the weekend, the Chinese capital of Beijing implemented a much stricter no-smoking law than was enacted in November. Smoking is now banned in all public spaces, including restaurants, offices and public transport.

He said that was a bad sign for Macau casinos, which have smoking lounges on their main casino floors.

Gaming revenue in Macau is down more than 37 percent over the past 12 months. Macau casinos reported the market’s first-ever annual decline in 2014, when gaming revenue fell 2.6 percent from 2013’s all-time single-year record of $45.2 billion.

Analysts are predicting casino revenue could top out at between $30 billion and $35 billion when 2015 is in the books.

A government crackdown on corruption since last year has slowed high-end gaming play in Macau.

Last week, the Galaxy resort, which is owned by Hong Kong-based Galaxy Entertainment, opened its second phase. But government gaming regulators only allowed 150 table games to be added to a casino expansion built for 500 tables games.

“Developments around Galaxy’s opening have significant read-through on the entire sector, as the market will likely use them as a proxy for other projects,” Deutsche Bank gaming analyst Andrew Zarnett told investors.

Wynn Resorts’ $4 billion Wynn Palace is scheduled to open in the first half of 2016, the first of the new casinos operated by Nevada-based companies to come online.