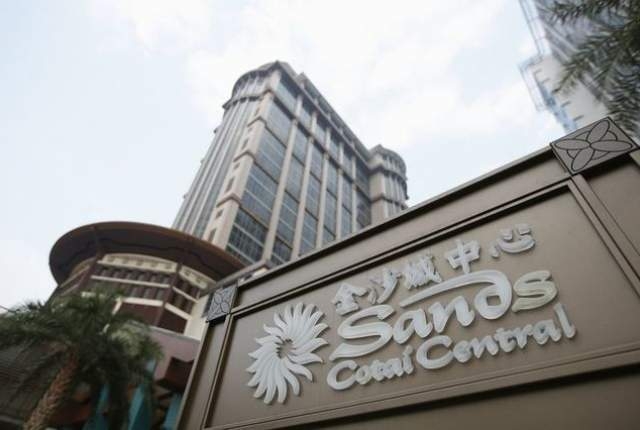 The Sands Cotai Central logo is seen in front of its hotel in Macau Sept. 20, 2012. (Reuters/Tyrone Siu/Files)

Where there’s smoke, there’s profit in the casino business. At least, that has been the tradition.

For decades in Las Vegas you could tell if a joint was doing well just by looking at the indoor atmosphere. You didn’t need a meteorologist or an MBA. If it was mostly cloudy, business was good. If there was a dense fog of cigarette and cigar smoke hanging in the air, it meant there were plenty of gamblers on the floor.

That unhealthy tradition is changing along with the habits of customers and the undeniable facts of the dangers of secondhand smoke. Air filtration systems have improved, and today you will find nonsmoking sections in many casinos. As it turns out, health risks aside, even three-pack-a-day puffers don’t want to stink of cigarettes.

But while Nevada continues to play situational Twister and pretend times haven’t changed all that much, the tumultuous Asian gambling capital of Macau appears determined to take a dramatic step by banning smoking in casinos. Is it a step forward, or an attempt to step on some controversial casino operators from Las Vegas?

For casino traditionalists here, prohibiting the cigarettes is like forbidding drinking whiskey at the tables. To them it seems somehow almost un-American despite the public health risks. I mean, how can tourists do their Rat Pack imitations without Jack Daniel’s and a pack of smokes at the dice table?

Some Macau casino investment analysts seem to suspect the approaching smoking ban isn’t about a concern for public health. Others apparently prefer to avoid speculation on the motivation of the government.

The Macau Business Daily this week reports that the ban, expected to start in January barring an unanticipated reversal of political fortune, figures to further damage the casinos’ once-breathtaking profits. In a prior form, the ban would have excluded Macau’s lucrative (and controversial) high roller VIP rooms and lounges. But now authorities want to clear the air there, too.

Deutsche Bank analyst Carlo Santarelli estimates the full smoking ban will cost operators $3.4 billion. If its research is correct, that would turn 2016 from an expected revenue growth of 2.2 percent to a loss of 5.6 percent. (The Sterne Agee CRT report’s worst-case scenario from the smoking ban is a 10 percent decline.)

That’s bruising, but it’s also important to remember that Macau is still a gaming industry monster. Even with the smoking ban, revenues are expected to reach $28.7 billion next year.

Combined with a devastating corruption crackdown by the Chinese government, the coming smoking ban figures to further hurt the bottom line at Macau casinos at a time licensees such as Las Vegas Sands, Wynn Resorts and MGM Resorts have invested billions in resort properties. The throngs of players and high rollers have been scared off. Rumors of a possible early end to some of Macau’s licensed casino concessions have even begun.

Why should you care whether thousands of Chinese gamblers breathe healthy air in Macau?

First, the health of Las Vegas-based casino companies is at stake. That coughing you hear these days could be Steve Wynn and Sheldon Adelson checking their stock prices.

The Macau story also provides an example of how yet another gaming jurisdiction is approaching the challenges of smoking in places where it has traditionally been accepted. Other American casino jurisdictions are widening smoke-free areas and in the case of New Orleans even banning the activity on the gaming floor. Sooner or later, whether by enlightened self-interest or after a class action lawsuit over secondhand smoke, Nevada will have to join the new century.

It’s ironic, and just a little suspicious, that Macau authorities have become so concerned about the lungs of casino customers and employees under the umbrella of a Chinese government that has allowed major businesses to operate as some of the world’s biggest polluters.

But, well, maybe you have to start somewhere.