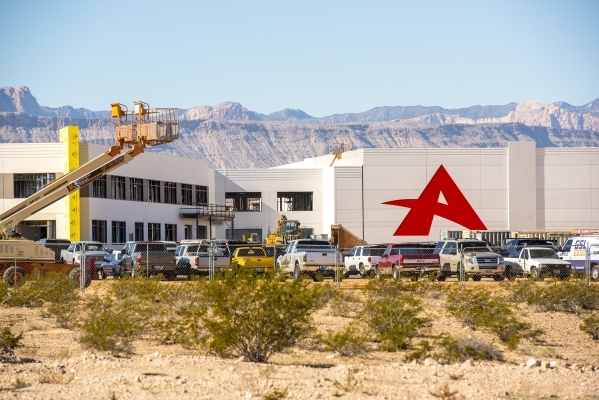 The Ainsworth Game Technology building is seen under construction near Jones Boulevard and the 215 Beltway in Las Vegas on Tuesday, Nov. 24, 2015. (Joshua Dahl/Las Vegas Review-Journal)

Austrian-based gaming technology company Novomatic has acquired a majority stake in slot machine maker Ainsworth Game Technology, which is developing its North American headquarters in a complex under construction in southwest Las Vegas.

Novomatic manufactures slot machines and related gaming technology. The company has offices in 50 countries and operates more than 230,000 gaming devices. Novomatic said it will continue to list Ainsworth’s shares on the Australian Stock Exchange.

Based in Australia, Ainsworth Game Technology has become one of the faster-expanding midlevel slot machine operations. Last year, it spent $38 million to acquire a company that manufactures slot machines for the American Indian casino market, allowing the business to move beyond traditional casino markets.

“Novomatic has been quietly building up its North American infrastructure over the past three years and is currently licensed in a large number of U.S. markets,” Eilers said.

Ainsworth Game Technology’s new North American headquarters is a 291,000-square-foot building, under construction along the 215 Beltway near South Jones Boulevard.

The company said this week it plans to make its initial push into the Indian gaming when it displays more than 50 slot machine titles at the Indian Gaming Tradeshow & Convention March 13-16 at the Phoenix Convention Center.