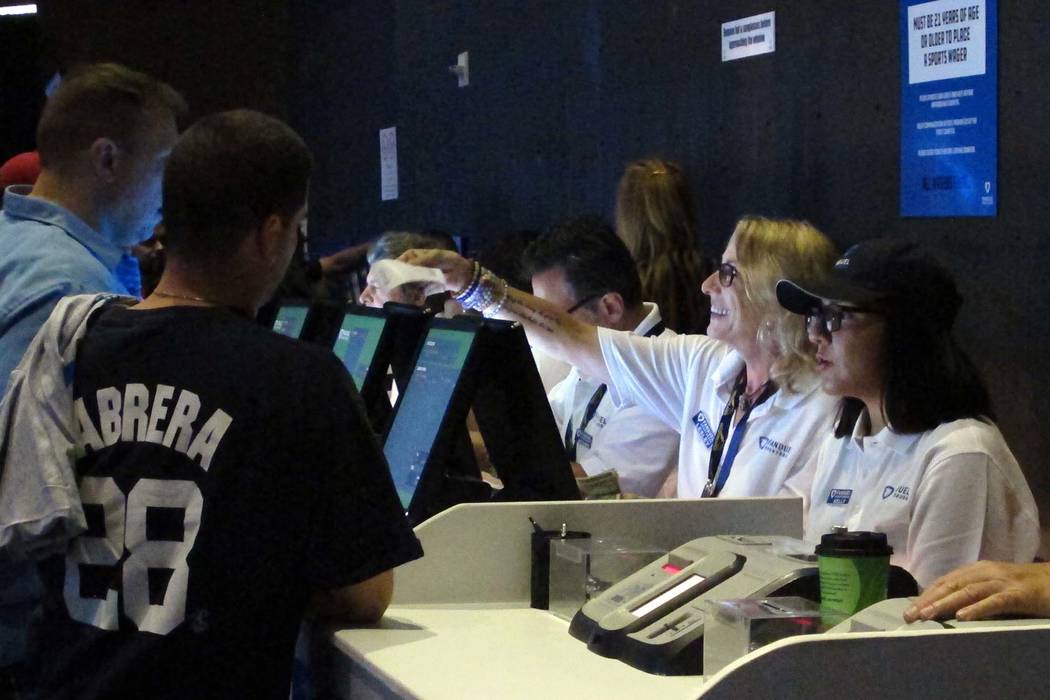 A clerk hands a sports betting ticket to a gambler at the Meadowlands Racetrack in East Rutherford, N.J., minutes after it started accepting sports bets, Saturday, July 14, 2018. (Wayne Parry/AP)

Las Vegas-based casino operators are racing to carve out a portion of the multibillion-dollar sports betting market as it becomes legal in more states.

Meanwhile MGM Resorts International and Boyd Gaming Corp. said they are forming a partnership that will allow each company to offer mobile sports betting and online gambling in states where only the other operator is present.

The announcements come on the heels of MGM declaring Sunday it will create a $200 million sports betting and online gaming joint venture with U.K.-based GVC Holdings, one of the world’s largest bookmakers.

In May, the U.S. Supreme Court overturned a ban on sports betting in most states, opening the floodgates to investment in the sector. Annual sports betting handle in the U.S. could reach $58 billion and gaming win $3 billion, according to an April report by Jefferies Financial Group.

New Jersey is the only state so far to have since authorized sports betting, according to California-based Eilers & Krejcik, but the group predicts 44 states could approve sports betting by 2023. Some states could restrict betting to land-based casinos, analysts said.

“Although we expect sports betting eventually to become a substantial business in the US, measuring the magnitude of the financial opportunities remains challenging,” David Katz, an analyst at Jefferies in New York, said in a note Monday. “The structures in each state have yet to be determined in terms of online, mobile or land-based.”

MGM will have casino operations in seven states once it completes its acquisition of a property in New York early next year and potentially gain an online presence in up to eight more states through Boyd.

The partnership between MGM and Boyd will allow each to potentially offer mobile sports betting and online gaming in 15 states, enabling them to compete more effectively with Penn National Gaming and Caesars, which are present in 15 and 13 states respectively.

MGM’s separate joint venture with GVC will also include the states it gains from the Boyd partnership.

“These agreements [by MGM] solidify two of the major pillars required for a successful expansion into sports betting: technology and distribution,” said John DeCree, an analyst at Union Gaming in Las Vegas.

Boyd announced last week it will launch sports betting at its Mississippi properties in August. MGM is expected to do the same.