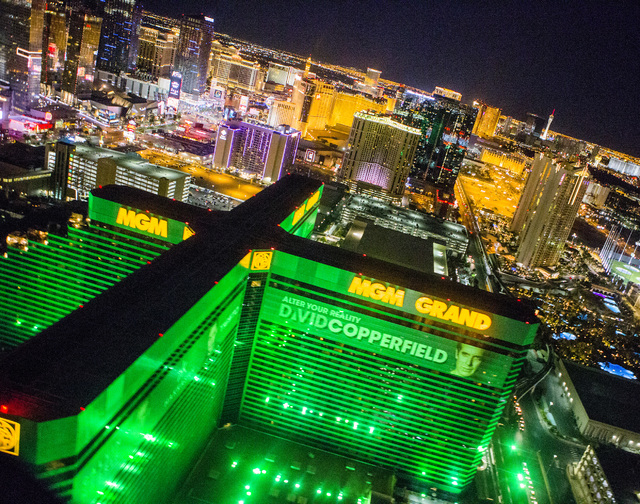 MGM Resorts International’s first-quarter revenue and earnings per share fell sharply from a year ago, though both beat Wall Street expectations.

Analysts polled by FactSet had forecast earnings per share of 11 cents on revenue of $2.3 billion.

The opening of T-Mobile Arena was a highlight of MGM Resorts’ busy year so far.

In a conference call Thursday, CEO Jim Murren said the venue, which opened April 6, did more business in its first three weeks than the MGM Grand Garden did all of last year.

The Strip was another strong point in the first quarter. Revenue per available room at the company’s 10 Strip hotel-casinos rose 8 percent from a year earlier.

But revenue from MGM China in Macau fell 25 percent to $469 million from $630 million, dragging down overall earnings.

During the call, Murren touted positives. The Crystals shopping center was sold for $1.1 billion. He called it the largest sale of a single enclosed mall in the United States in more than a decade. As a result, CityCenter yielded $540 million in dividends to the company — of more than $1 billion total.

The company also completed its $1.2 billion initial public offering for MGM Growth Properties, the real estate investment trust that owns the real estate and buildings for 10 MGM resorts, including seven on the Strip. The REIT assumed $4 billion of MGM’s $12.8 billion in debt.

Murren said the Crystals sale and the IPO yielded $1.6 billion MGM Resorts can use to pay down debt.

“I want to emphasize the fact that the culture of our company has changed and has improved,” Murren said, “and is now one of relentless attention to continuous improvement and not accepting the way things have been done for decades upon decades in the gaming industry. … This has permanent, long-term, accelerating implications for our revenues, our profits.”

T-Mobile Arena, MGM’s joint venture with Anschutz Entertainment Group, already has drawn more than 100,000 people, including many out-of-towners, Murren said. Attendance has been higher than expected, proving there’s latent demand for entertainment from an audience thirsty for new acts.

Drawing such business, he said, benefits not just his company, but Las Vegas. He said he’s heard that suites from other hotels have filled with arena-goers on event nights.

“I’m really overwhelmed by the feedback we’ve received, and I’m really appreciative that many of our competitors took us on our word and believed that we would try to create something that would be additive to the community.”

Murren expressed confidence that the new arena would ensure Las Vegas gets an expansion National Hockey League franchise. Having an NHL team, he said, could draw other major pro teams.

Last week, Mark Davis, the owner of the Oakland Raiders, told the Southern Nevada Tourism Infrastructure Committee he wants to move his NFL franchise to Las Vegas and that he would put $500 million toward the construction of a domed stadium if the Legislature OKs a public-private financing plan.

On Thursday, Murren said he loves football and would love to see an NFL team move into a new stadium in Las Vegas. Having a team would boost the local economy and tourism, he said.

“But we’d have to figure out how to pay for such a thing,” he said.

Officials from Las Vegas Sands Corp. and Majestic Realty have proposed a $1.4 billion domed football stadium, with more than half the costs funded by tourism taxes, including revenues that now support the Las Vegas Convention and Visitors Authority.

Murren on Thursday reiterated comments he made in January, at the Las Vegas Metro Chamber of Commerce’s Preview event, saying he supports a proposed $2.3 billion expansion and upgrade of the Las Vegas Convention Center, which is operated by the authority. LVCVA officials have said the expansion is essential to prevent other cities from luring conventions away from Las Vegas. Las Vegas Sands opposes the project.

“I believe there is a near-universal understanding that without improving the standing convention center, which is literally the lifeblood of this entire hospitality community in Las Vegas, there’s no point in talking about any other nice to haves because we won’t have the economic firepower to fund anything.”

The Review-Journal is owned by the family of Las Vegas Sands Corp. Chairman Sheldon Adelson.