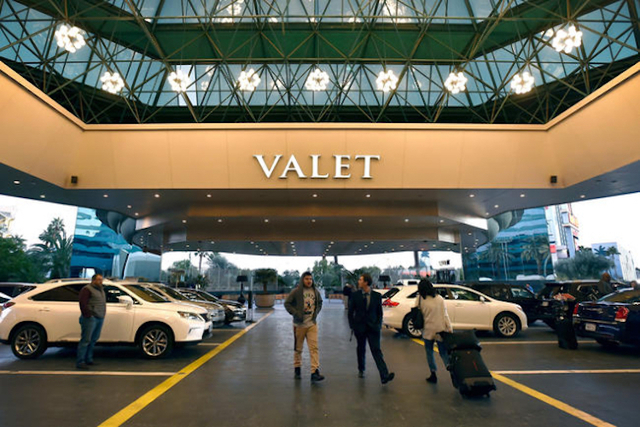 Less than a year after implementing parking fees at most of its properties, MGM Resorts International will increase its rates next week, some by as much as 39 percent.

“We are adjusting the parking rates for a variety of business-related reasons,” said MGM spokeswoman Yvette Monet. “These adjustments are based on market analyses we have conducted since we implemented the program.”

The daily valet parking rate for MGM’s top-tier properties — Aria, Bellagio and Vdara — will climb from the current $18 for 24 hours to $25, a 39 percent increase.

MGM started the trend of paid parking at Strip properties when company officials announced in January 2016 their intent to begin charging customers later in the year. The company started charging people to park at properties near T-Mobile Arena in April when events started being scheduled at the state-of-the-art venue.

In June, gates, scanners and pay stations were installed in parking garages and guests began paying. Nevada residents caught a break through the end of December, getting to park free by scanning a barcode on their driver’s licenses to get free admission to garages.

But that ended Dec. 29 and now, everybody pays.

Other companies followed MGM’s paid parking lead. Today, guests of Caesars Entertainment properties pay to park, but Nevada residents can scan their licenses to get free access. The Cosmopolitan of Las Vegas also announced plans for paid parking and Wynn Las Vegas put a fee on valet parking, but not self-parking.

When MGM first announced its $90 million parking initiative, officials said the revenue generated by the parking fees would be dedicated to building a new $54 million, 3,000-space parking structure near the Excalibur, close to T-Mobile Arena to add parking for arena events.

In addition, the company said it would invest $36 million in upgrades and enhancements to existing parking facilities. MGM’s current parking lots lack improvements available through technology, including space availability and way-finding systems.

Company officials declined to provide parking revenue figures and did not have an update on the company’s announced plans for an annual parking pass.