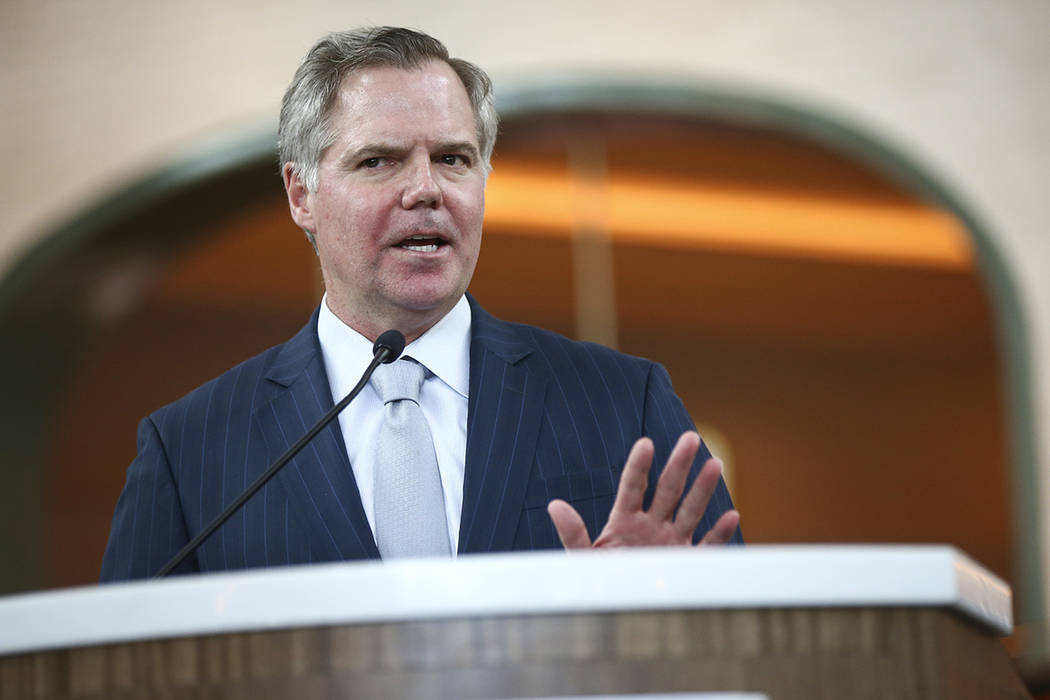 MGM Resorts International shares took a tumble Thursday on the heels of the company announcing it is in search of a new CEO and chairman.

After markets closed Wednesday, MGM revealed that Jim Murren, who has been leading the company since 2008, would be stepping down from both roles. Shares closed down 5.5 percent Thursday to $31.80.

We “imagine (the decision) was quite difficult,” Deutsche Bank analyst Carlo Santarelli said in a note to investors. But “Murren indicated he believes the company is in a great position for a new leader to take over.”

But analysts are unclear on what Murren — and the company — have in store next.

Murren said he’d be leaving after 12 years at the helm to let another person lead MGM through a new period of growth, one that has a greater focus on industries like sports. His departure is set to come prior to the expiration of his contract, which went through the end of 2021.

“We’ve really changed the dynamic of this company,” Murren said in an earnings call Wednesday. “I thought it was pretty clear that a leader should help lead a company into the next decade or two. And so I wanted to make sure the board had the time, which I will use promptly to do a robust search and find my successor.”

Murren will remain in his current roles until then, focusing on leading the company’s bid for an integrated resort in Osaka, Japan, as well as entertainment and sports initiatives. He expects to be on MGM’s earnings call next quarter.

Murren said the board will look internally and externally for the best possible candidates to replace him. He also made a point of mentioning the talent within the room.

“We have such a great team in place. To my left, I look at (President and Chief Operating Officer) Bill Hornbuckle and to my right (Chief Financial Officer) Corey Sanders. (President of commercial and growth) Atif (Rafiq) is on a plane flying back here,” Murren said. “We have such great talent that I depend upon and trust to continue to run this company going forward. And I don’t want to get ahead of the board’s process.”

In addition to holding the positions of chairman and CEO of MGM, Murren also is the chairman of the company’s affiliated real estate investment trust, MGM Growth Properties.

When asked whether he would still serve on these boards after stepping down from his current role, Murren offered back “somewhat cagey answers,” according to Santarelli.

“I am the chairman of all those companies you mentioned as I am the CEO (of MGM), but it’s hard to say what will happen after that,” Murren said. “I cannot get ahead and will not get ahead of the board’s search committee and process. I serve at the pleasure of the board. I’ve said that I will stay on in whatever capacity.”

A note from Union Gaming analyst John DeCree said there was “no bigger news” from MGM’s earnings announcement Wednesday than Murren’s resignation.

“Mr. Murren has had one heck of a career with MGM and will certainly be missed,” DeCree said. “His departure brings to question the strategic direction of the company.”

SunTrust Robinson Humphrey analyst Barry Jonas said he has “no doubts” MGM’s board will find a strong successor but that its stock could potentially be in a holding pattern until then.

“Murren has been instrumental in transforming the company and (we) think he has effectively set the strategic direction for the company for his successor; though the sports betting rollout, Japan, and the asset monetization implementation are still somewhat works in progress,” Jonas said in a note.

Jefferies analyst David Katz said that Murren’s departure continues a “transformative change” for MGM and that he expects “further upside” in the company’s shares.