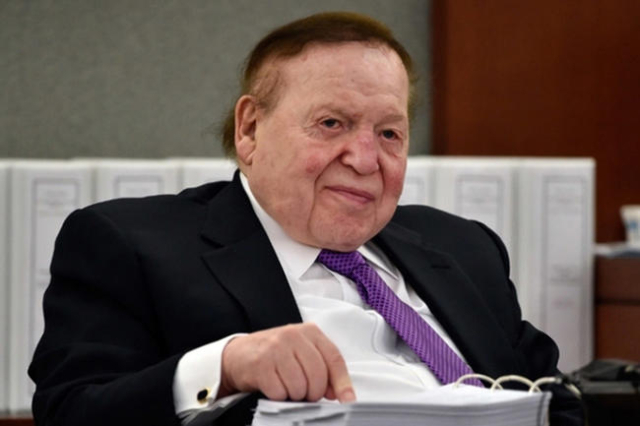 State gaming regulators are monitoring the issues surrounding the purchase of the Las Vegas Review-Journal by the family of Sheldon Adelson, the majority shareholder in casino giant Las Vegas Sands Corp.

Gaming Control Board Chairman A.G. Burnett cites Nevada gaming regulations and the state’s public policy covering gaming license holders in saying regulators have the right to look into the transaction.

The Review-Journal’s ownership change attracted global attention even before Adelson’s involvement was known. When the $140 million deal closed and was announced on Dec. 10, the new owner was listed only as News + Media LLC, a Delaware corporation. No officers or directors of that corporation are publicly listed, as allowed under Delaware law, though Connecticut newspaper owner Michael Schroeder was introduced as the holding company’s “manager.”

The Review-Journal nearly a week later revealed that Adelson’s son-in-law, Patrick Dumont, had orchestrated the transaction.

What Adelson and his family intend to do with the newspaper remains a hot topic of discussion. In recent interviews with Asia-based media outlets, Adelson, chairman and CEO of Las Vegas Sands, has made contradictory statements about the family’s control of the Review-Journal.

Burnett said the agency was following the coverage by the RJ, the Los Angeles Times, New York Times and numerous other publications and websites.

Adelson and his family control more than 52 percent of Las Vegas Sands, which operates The Venetian and Palazzo on the Strip, as well as casinos in Macau, Singapore and Bethlehem, Pa.

“We are watching all of these developments very closely,” Burnett said. “Of course, it’s incumbent upon all gaming license holders to avoid actions that go against the morals, good order and general welfare of the people of the state of Nevada, and to avoid doing anything that reflects or tends to reflect discredit on the state.

“I’m sure Mr. Adelson and his team are doing their utmost to do that.”

“The agency is aware of the purchase of the newspaper by the Adelson family,” said Doug Harbach, a spokesman for the Pennsylvania Gaming Control Board.

Regulators are also watching to see if Adelson uses the Review-Journal ownership to influence gaming industry public policy. Adelson is opposed to the further legalization of online gaming, which puts him at odds with other gaming companies, including Caesars Entertainment Corp. and MGM Resorts International.

Adelson gave interviews to Reuters’ Hong Kong bureau and the Macau Daily Times on Dec. 18, when he was in Macau to celebrate the opening of a new hotel at the Sands Cotai Central complex.

Adelson, who owns the newspaper Israel Today and a smaller religious newspaper in that country, told Reuters, “We are not going to hire an (RJ) editor, we left it up to them (current management), period. We may take some of the positive characteristics of our Israeli newspaper and add them to there but that’s all just suggestions.”

The RJ’s top editorial post will soon be vacant. Michael Hengel, 61, who has held that job since 2010, has taken an early-retirement buyout.

On Dec. 24, the Macau Daily Times, in a question and answer interview, reported Adelson saying “his children” bought the Review-Journal and he has “no financial interest” in the newspaper.

“I don’t have anything to do with it,” Adelson said. “My money that the children have with which to buy the newspaper is their inheritance. I don’t want to spend money on a newspaper.”

Adelson also told the Macau Daily Times his family is “not operating” the Review-Journal and the paper is being managed under a contract by former owner GateHouse Media.

“So I’ll probably never talk to the editor,” he said.