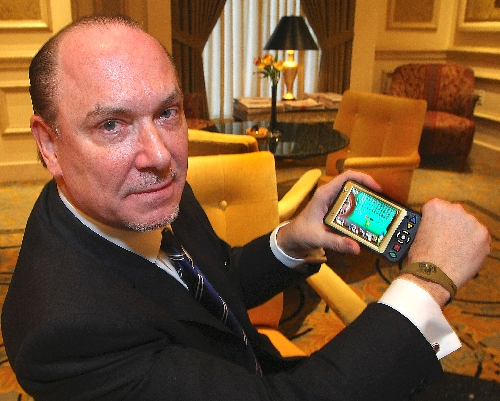 Cantor Fitzgerald LP, already an established firm known for its innovations in computer-based bond brokerage, has moved far beyond the button-down world of finance and exported its trading know-how to casinos in Las Vegas.

Cantor Gaming is the brainchild of Lee Amaitis, a former executive with Cantor Fitzgerald and ex-CEO of its offshoot BGC Partners. Amaitis, who was granted a gaming license by the Nevada Gaming Commission in 2005, believed it was possible to use Cantor’s trading platform to create a more sophisticated gambling experience.

An experience, he said, that allows customers to operate more like a day trader than a traditional casino sports bettor, moving in and out of positions, looking for hedges and capitalizing on moments of inefficiencies.

"There were a lot of regulatory hurdles to go through to get us to where we are today," said Amaitis, president and chief executive officer of Cantor Gaming. "We are here to stay. We’ve made quite an investment in Las Vegas."

Cantor Gaming began when Amaitis was living in London. In December 2000, an online gaming platform and website for bookmakers was launched.

The attacks on the World Trade Center killed 658 Cantor Fitzgerald employees. Following the firm’s devastating losses, he played a key role in rebuilding its electronic trading platform know as eSpeed. In 2005, he started BGC Partners.

"I was head of the company through the first quarter of 2008 before I retired and moved to Nevada to focus full time on Cantor Gaming."

In 2003, Amaitis launched Cantor Gaming with a simple idea — create a platform to let customers wager on sports using their mobile phones. But Nevada gaming officials rejected that proposal. So, Amaitis and Cantor Gaming created their own mobile device, called an eDeck.

The mobile tablet was granted approval by Nevada regulators in November 2008. Cantor Gaming then received a slots license the following month .

The eDeck, which is about the size of an iPad and operates as a touch-screen wireless device, can be used to play Cantor Gaming’s proprietary games, including XtraOdds Black Jack and XtraOdds Baccarat from the sports books and other public areas of the casino.

"We built Cantor Casino online and we invested in a lot of proprietary technology," he said. XtraOdds Black Jack and XtraOdds Baccarat offer extra propositional bets that dynamically calculate odds based on the cards dealt, giving the opportunity to press or hedge a customer’s bets.

The company’s eDeck devices are used at Cantor Race and Sports Books at M Resort, and soon to be offered at the Cosmopolitan of Las Vegas, Tropicana and Hard Rock Hotel. Amaitis said the firm had leased out its device, which is called "pocketcasino" at The Venetian and Palazzo.

"We put all of our technology into M Resort when we first opened the 6,000-square-foot facility last year," Amaitis said. "It has blown away every financial expectation we had."

He estimated Cantor Race and Sports Books in Las Vegas would have a handle of $400 million a year based on statewide handle of $2.5 billion.

"We have over $100 million invested in Nevada," Amaitis said. "Our new sports book at the Hard Rock, for example, represents a $5 million to $6 million investment when it’s all done."

The Cantor Race and Sports Books are scheduled to open inside the Cosmopolitan and Hard Rock by the end of the first quarter of 2011, while the Tropicana site was expected to open by Dec. 31.

"The company just started receiving revenues (this year)," he said. "I expect to be profitable in 2011."

The eDeck can also be used for in-running sports wagering. Cantor Gaming’s In-Running program allows customers to place wagers throughout a sporting event, including whether the Los Angeles Lakers’ Kobe Bryant will sink two crucial free throws in the fourth quarter against the Boston Celtics.

The lines change constantly depending on where the play is at any given time. At the M Resort, players can place in-running wagering in football, basketball, baseball, hockey, soccer, golf, and tennis. But in-running isn’t available for every game.

"We do it for the main football, baseball or basketball games," said Andrew Garrood, executive director of Las Vegas Sports Consultant, a sports handicapping service owned by Cantor Gaming. "A Florida International versus Florida Atlantic college football game is not going to have many people interested, but a UCLA versus USC game attracts a lot of interest for customers in-running wagering."

Garrood said there was nothing stopping them from offering in-running on every game, except maybe a customer’s "ability to absorb so much information."

Amaitis described Inside Wagers as a line within a line. It allows a sharp bettor to wager, for example, on National Football League games — sides, totals and money lines — for less than the traditional 10 percent fee imposed on every bet.

Using the recent Green Bay Packers-Minnesota Vikings game as an example, Garrood said bookmakers might post the game Packers -7 (-103) and the Vikings +7 (+103). Not only is the commission reduced from -110 to -103 when laying the points, it’s actually a positive amount when taking the points – bet $100 to win $103.

The only other cost of the bet is a fixed fee of 2.5 cents, up to a maximum of 2.5 percent, on all Inside Wagers. In order to participate in Inside Wagers of In-Running, players must sign up for a wagering account, which will entitle them to bet into several Inside Wagers windows that are open for limited periods of time.

"We want to offer more (options). The only limit to all of this is human imagination," said Garrood, a mathematician turned derivatives trader. "We are working on other (products) as well."

He said Cantor Gaming’s success came from understanding transactions and learning from its parent company, Cantor Fitzgerald, how to price those transactions.

Amaitis agreed, adding Cantor Gaming’s advantage was speed and the ability of its bookmakers to post odds on situations as they arise.

Cantor Gaming’s business strategy is clear. Amaitis said the company was negotiating with other hotels and casinos to establish Cantor Race and Sports Books or "license this technology to other casinos."

Amaitis said the company’s early success has come from an understanding that "this is not about sports betting, it’s about trading."