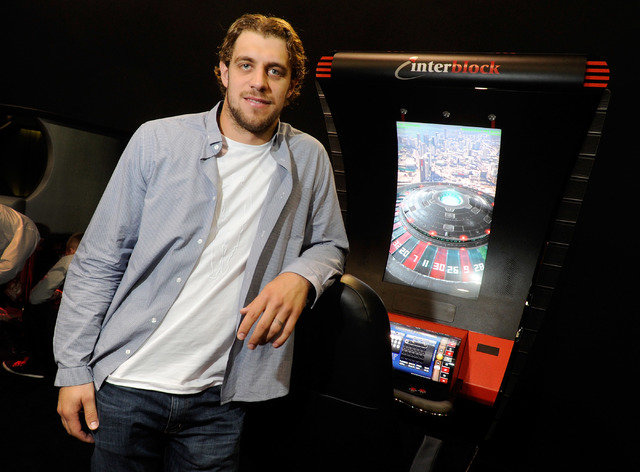 Hockey player Anze Kopitar of the Los Angeles Kings poses at the Interblock booth during G2E at the the Sands Expo and Convention Center on Wednesday. Kopitar is the spokesman for the Slovenian gaming equipment manufacturer, which is trying to break into the U.S. market. (David Becker/Las Vegas Review-Journal) 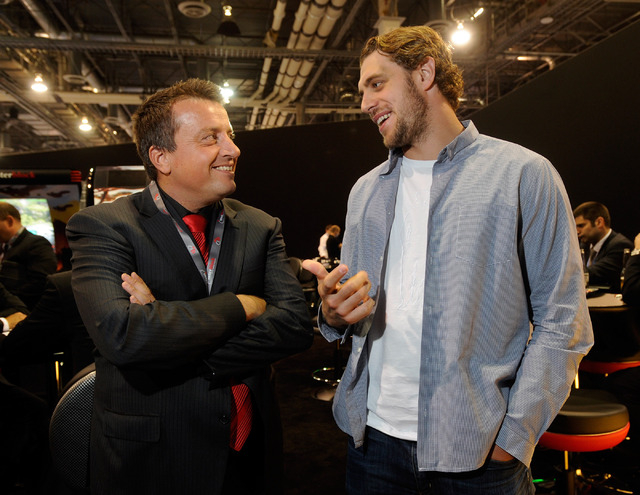 Anze Kopitar, right, of the Los Angeles Kings speaks with Joze Pececnik, chairman of the board of Interblock, during a meet and greet at the Interblock booth during G2E at the the Sands Expo and Convention Center on Wednesday. Kopitar is the spokesman for Interblock, a Slovenian gaming equipment manufacturer trying to break into the U.S. market. (David Becker/Las Vegas Review-Journal) 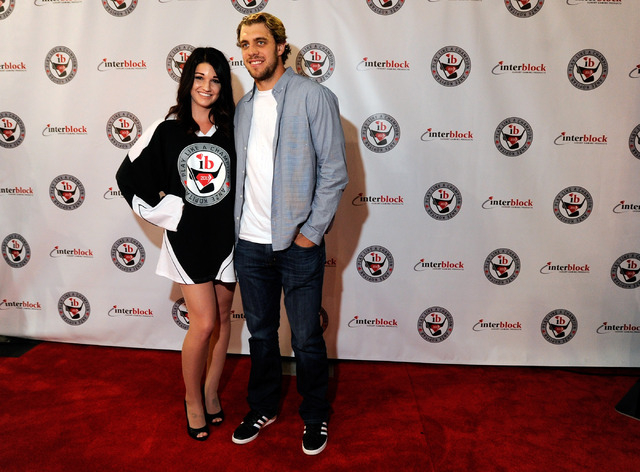 Anze Kopitar, right, of the Los Angeles Kings poses with Mandi O'Brien of Las Vegas during a meet and greet at the Interblock booth during G2E at the the Sands Expo and Convention Center on Wednesday. (David Becker/Las Vegas Review-Journal)

Los Angeles Kings center Anze Kopitar doesn’t consider himself much of a gambler.

He might play poker with his teammates every now and then on long trips. Sitting down at a table this weekend, however, during down time when the Kings visit Las Vegas for Frozen Fury XV at the MGM Grand Garden isn’t in the cards.

On Wednesday afternoon, Kopitar, 26, spent a few hours signing autographs and posing for photos at the Interblock Gaming Products booth inside the Global Gaming Expo at the Sands Expo and Convention Center. The night before, he scored the winning goal in the Kings’ 2-1 preseason victory over the Anaheim Ducks.

His reason for being at the G2E was simple. Interblock owner and chairman Joc Pececnik asked. Pececnik is one of the richest men in Slovenia, Kopitar’s home country.

When the Kings won the Stanley Cup in 2012, Kopitar took the trophy home for a day with the fans. He became acquainted with Pececnik. Last year, the goal scorer asked Pececnik to take part in a golf tournament that benefited Kopitar’s charitable organization for children in Slovenia.

This year, Pececnik asked him to be the celebrity spokesman for Interblock, a large Slovenia-based gaming equipment manufacturer that makes electronic gaming tables used in casinos throughout Europe and Asia. The company has a U.S. division headquartered in Las Vegas that has provided electronic table games to Strip casinos.

“He is one of the most influential people back home,” said Kopitar, who received permission from the Kings to spend the afternoon at the G2E.

He flew back to Los Angeles on Wednesday evening and will return for this weekend’s games when the Kings play the New York Rangers at 7:30 p.m. Friday and the Colorado Avalanche at 7 p.m. Saturday.

“He’s a great sports fan and great person to be around.” Kopitar said.

Kopitar’s duties are simple: Play golf with Interblock clients and make public appearances on behalf of the company, such as at G2E. Interblock was competing for attention at the trade show with such gaming manufacturing giants as International Game Technology and Bally Technologies. It saw a boost in attendance once it became known throughout the convention hall that Kopitar was in the booth.

He made his first visit to Las Vegas for Frozen Fury in 2006 at age 19. Kopitar said the Kings players love making the trip to Las Vegas and the MGM Grand Garden.

“It’s a great arena and a great atmosphere and a great stage,” Kopitar said. “It’s small, but the fans really get us going. It’s as close to a regular-season game as you can get.”

Kopitar said the Kings are looking to rebound after getting knocked out of the playoffs in the Western Conference finals by the eventual champions, the Chicago Blackhawks.

“We have the core group back, so that’s a big plus going into the season,” said Kopitar, who expects to play in both Frozen Fury games. “Hockey is getting big in Los Angeles. We know how much winning the Cup meant to the fans.”