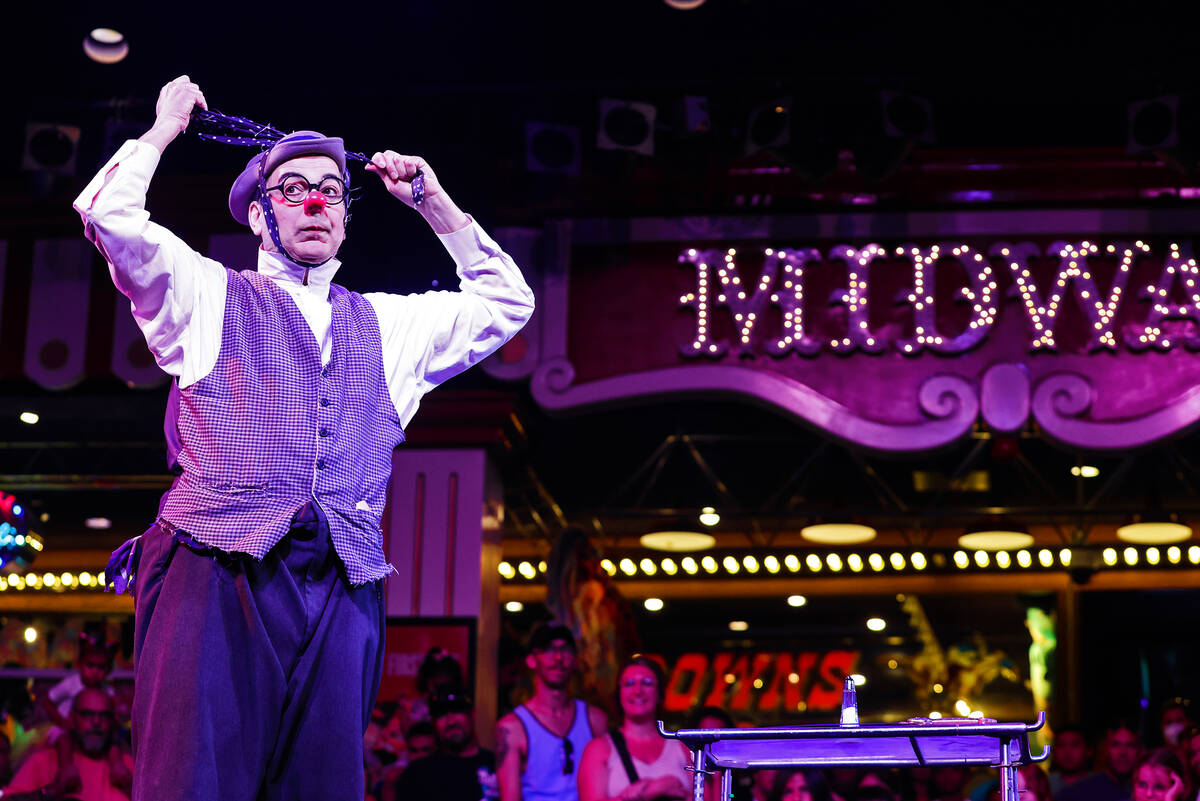 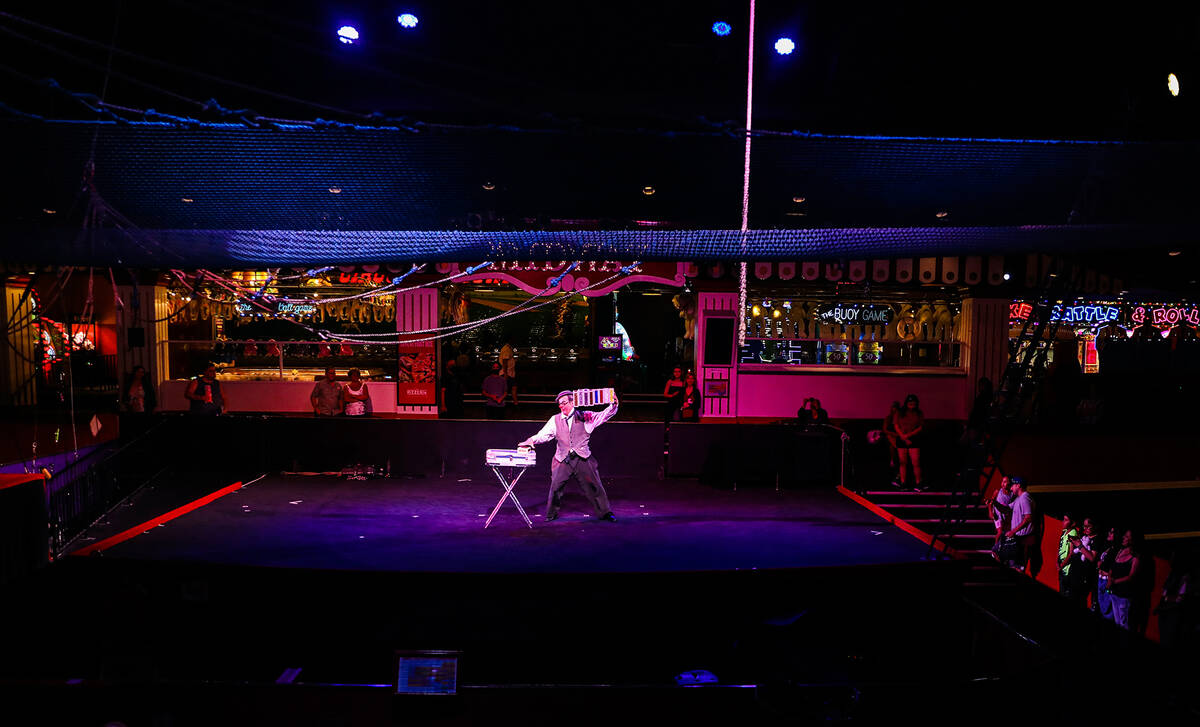 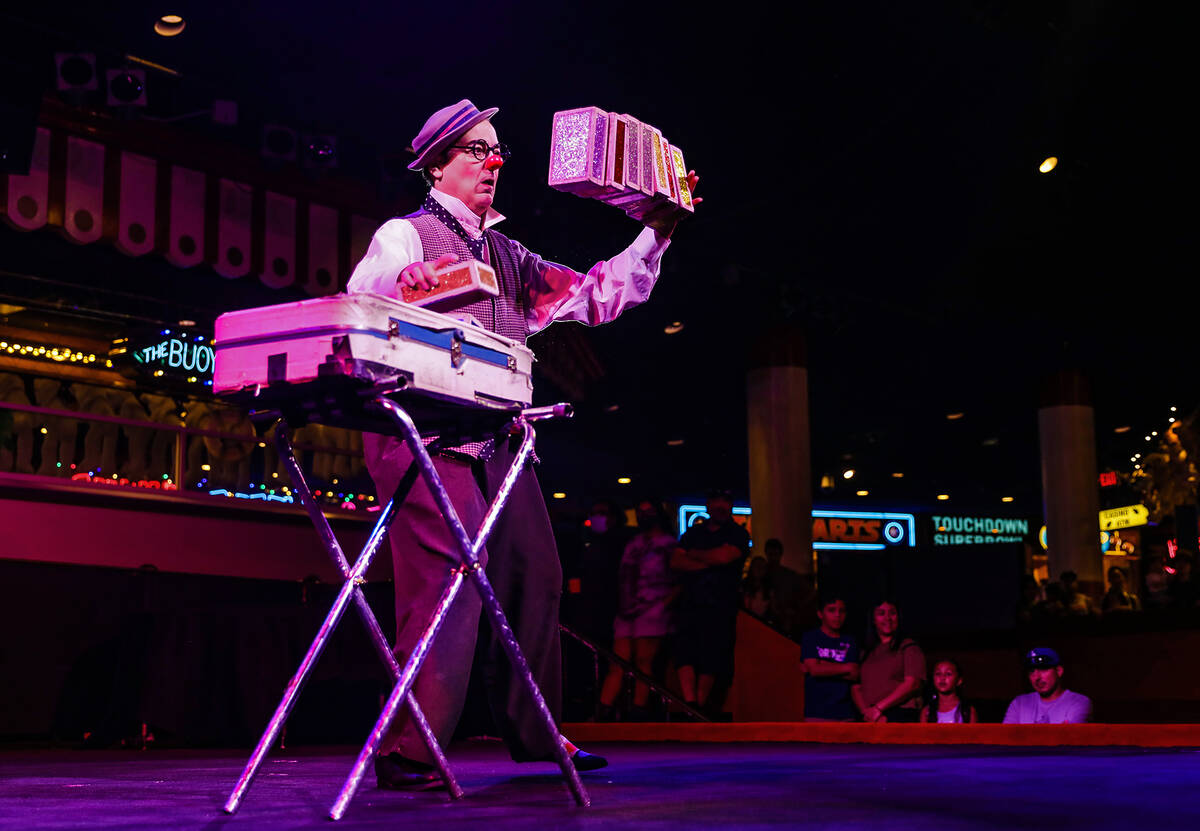 The show was a little late in starting Thursday at Circus Circus, so Rocco the Clown stepped in.

The performer didn’t say a word when he went onstage. He just started using his hands to urge the families filing into the casino’s Midway to hurry up and sit down, often with a tongue-in-cheek disappointed look.

Then Rocco made people laugh, something he has done for the past 10 years at Circus Circus and about 37 years overall.

You could say it’s his job. But don’t.

Rocco performed first on what was billed as a celebration for International Clown Week, but was really not much more than another day at Circus Circus, which has featured circus performers since its 1968 opening.

“The clowns, circus acts, that’s something that they opened with, and it has worked for several decades,” said Shana Gerety, Circus Circus senior vice president of operations.

Rocco, 58, performed by himself Thursday, then after a short break, he did a different routine that led into a performance by the Flying Poemas, a family of trapeze artists. The circus acts start at 12:30 p.m. and continue every hour until 10:30 p.m. seven days a week.

Rocco doesn’t speak when he performs, but he works the crowd with skills honed since he went to clown college in 1985. He spent time with the Ringling Bros. and Barnum & Bailey Circus, as well as overseas.

“Here, Europe, Japan, pretty much people laugh at the same stuff, but you just have to do the setups differently,” he said.

In his first act Thursday, Rocco took a series of blocks out of a suitcase, then eventually, after some comedic difficulty, balanced them all on his chin. In his second performance, Rocco swallowed a sword after pouring some salt on it, as if preparing for a meal.

More than 200 people packed into the Midway performance area, and several children posed for photos with Rocco after the show.

Then-U.S. President Richard Nixon declared the first National Clown Week in 1971 “to call public attention to the charitable activities of clowns and the wholesome entertainment they provide for all our citizens.” The tradition eventually expanded to become International Clown Week.

Rocco said all clowns feel a kinship, and he is especially close with the other longtime Circus Circus clowns. However, he said he is sad that few young clowns seem to be coming into the profession.

“This world needs more laughter and a little less of whatever it has right now,” he said.

One culprit Rocco blames is “It,” the Stephen King horror novel that became a miniseries and then was later remade as two feature films. The villain, Pennywise, is an evil clown with a full face of white makeup.

Rocco said “It” led to some people saying that they are afraid of clowns, and he said he doesn’t wear full makeup very often as a result.

“Stephen King didn’t do us any favors,” he said.