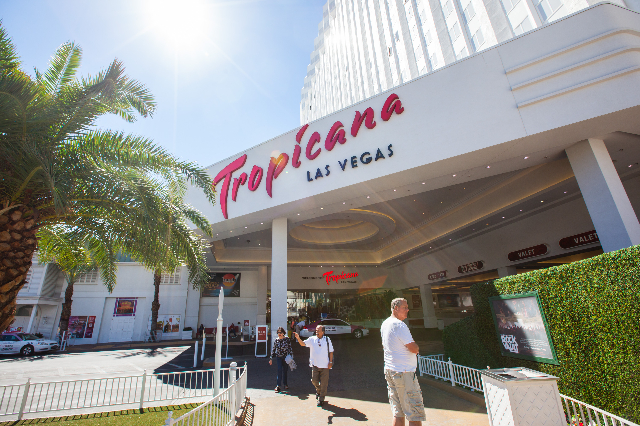 People walk outside of the Tropicana hotel-casino in Las Vegas on Wednesday, April 29, 2015. Penn National Gaming announced an agreement to acquire the Tropicana for $360 million. (Chase Stevens/Las Vegas Review-Journal)

The move was recommended by Penn’s outside auditors to change the classification of rent payments to GLPI from an operating lease to a financing obligation. As such, Penn National didn’t announced net income or earnings per share when it released its third quarter earnings.

Still, Penn National grew quarterly revenue 14.5 percent to $739.3 million and cash flow 19.6 percent to $210.4 million for the period that ended Sept. 30. Much of the increase was due to the opening of the Plainridge Park Casino in Massachusetts in June and the company’s $360 million purchase of the Tropicana Las Vegas in August.

“This change has no impact on key indicators of the company’s performance and the third quarter was very active and productive for Penn National,” Wilmott said.

In addition to the Tropicana, Penn National owns the M Resort in Henderson.

The Las Vegas properties are part of the company’s West Division, which grew revenue almost 21 percent in the quarter.

On a conference call with analysts, Wilmott said the company expects to complete the restatement before filing its year-end financial report.

He said it was difficult, however “to handicap how the market responds to what we believe to be an innocuous reclassification of rental expenses as they were converted from operating leases to a financing obligation.”

Penn National said it was also on-track to open a $390 million Indian casino near San Diego by the middle of next year.