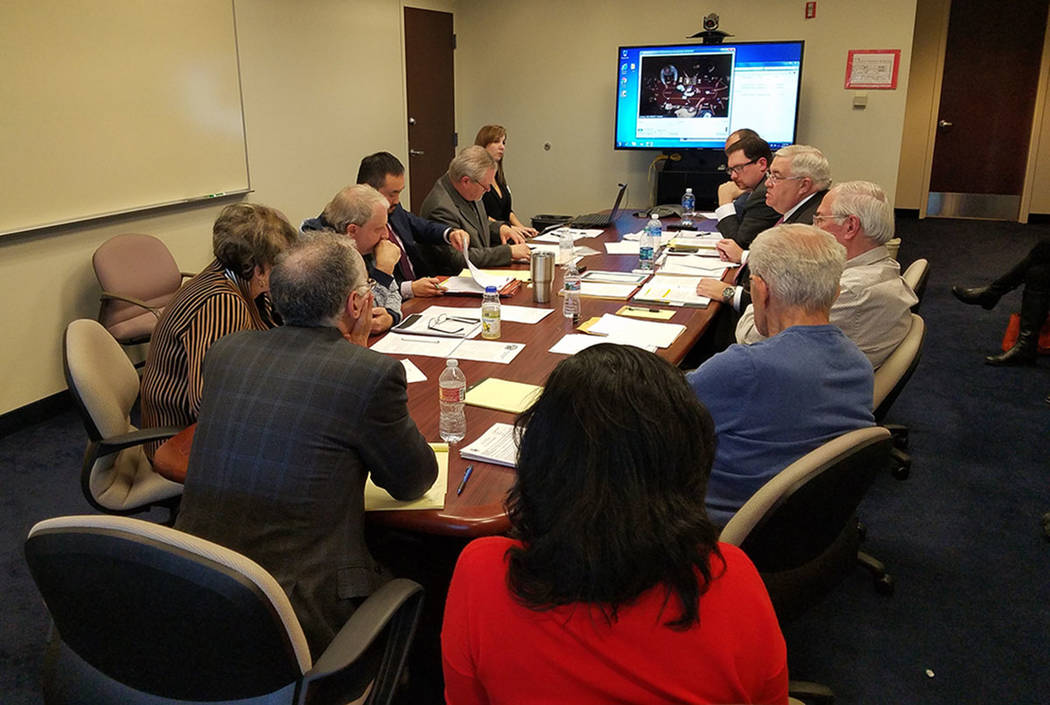 Poker players, Station Casinos' poker room officials and state Gaming Control Board administrators gather around a table in a conference room at the Gaming Control Board offices at the Sawyer Building in Las Vegas on Tuesday, Dec. 12, 2017, to hear a player dispute involving a "bad-beat" jackpot. (Richard N. Velotta/Las Vegas Review-Journal)

The nearly 90 people who thought they had won money in Station Casinos’ “bad beat jackpot” poker promotion had to wait more than nine months to cash in.

But even though they have been paid, the bad-beat jackpot is gone and so are many of the players who became dissatisfied about waiting so long.

While some have gone back, others still harbor bad feelings for the company, whose executives say they only wanted to be absolutely certain that the company was providing a fair game to all players.

“The position that Station took during the nine months they held back payment surely made a negative impact on the number of players going to Station casinos,” said Rochelle Lindner, one of the players who took a complaint to the state Gaming Control Board.

Lindner, who has received her share of the jackpot, $565, and described herself as a three-times-a-week player at Santa Fe Station prior to what she calls “the bad-beat fiasco,” recently went back with her husband to play.

But in her first time back, Lindner said she was disappointed again.

Playing Texas Hold ’em, Lindner was dealt a king and an ace and discovered she had a high hand with a full house, kings full of aces, after three community cards were revealed.

But after the final card, she was told she had been “counterfeited” after a fourth king was dealt and would only receive the pot on the table and not a bonus for a high hand.

When she asked for an explanation, Lindner said she was given a copy of the rules but no further information about what had happened.

“It’s hard to believe that our first day back we encountered another confrontation and were treated so poorly,” she said. “It was validated as a winning high hand. It was totally, totally unfair.”

Asked if she would take her complaint to the Control Board, Lindner said she probably wouldn’t because she was so disgusted with how long it took to be paid after being declared a winner in the game played June 7.

“I’m just done with them,” she said, adding that she and many other players from Station poker rooms have migrated to the rival Orleans poker room.

Lindner was among 90 players who shared a special $120,000 progressive jackpot that was part of Stations’ bad-beat promotion that paid a player experiencing a bad beat — a usually winning poker hand that lost to an even better hand.

Roots of the dispute

A dispute arose over whether an action by Leonard Schreter, a player at Santa Fe Station, broke collusion rules by communicating with other players by turning his cards face up out of turn. Another player at the table, Avi Shamir, had a presumed bad-beat hand, but Schreter’s apparent breach in poker protocol led to Station deciding to nullify the jackpot.

The incident affected the other players because under the promotion, every poker player at every Station casino poker room was eligible for a portion of the jackpot. Shamir was in line to collect $62,126 and Schreter, $12,426. Schreter, feeling badly that he had ruined Shamir’s chance to win more than $62,000, withdrew from the dispute in late June.

Shamir, Lindner and Michael Bluestein, another player at the Santa Fe, took the matter to the Control Board as a patron dispute.

A hearing was conducted on Dec. 12 and hearing officer Chan Lengsavath ruled in favor of the players in a 10-page report.

After another month’s delay for a thorough review of the report, the three-member Gaming Control Board determined Feb. 7 to uphold Lengsavath’s ruling. Station had 25 days to appeal to Clark County District Court.

Earlier this week, a Station spokeswoman confirmed there would be no appeal and the players were paid.

“The player-funded bad-beat jackpot had always been ready for payment pending the GCB’s decision,” said Lori Nelson of Station. “The three players who filed a claim were paid in accordance with standard Gaming Control Board procedures. Additionally, we have been distributing jackpot awards to all of the qualified poker players who participated, not just the three who filed a claim.”

Nelson also confirmed that the company has discontinued the bad-beat promotion, adding that “our current promotions are equally and in some cases richer than was Bad Beat.”

Asked whether attendance at poker rooms had diminished as a result of the controversy, Nelson said the company doesn’t comment on guest levels at specific outlets.

“I don’t go nearly as much as I use to,” Bluestein said. “I’ve been going elsewhere.”

He said he plans to write to the company to express his displeasure.

“I know others have told me that they won’t go back,” he said.

“Both my husband and I will not go back to any Station casino and will tell my story for all who are or were their customers.”