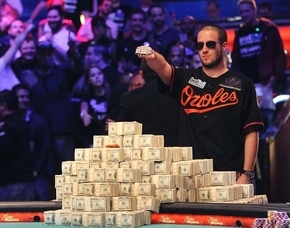 Greg Merson celebrates after winning the World Series of Poker No-Limit Holdem Main Event in the Penn & Teller Theater at the Rio on Oct. 30. (Review-Journal)

Caesars Entertainment Corp. reportedly offered to sell the off-Strip Rio and the World Series of Poker to PokerStars, a spokesman for the owner of the online gaming business claimed in an email Tuesday.

The statement by Eric Hollreiser, head of corporate communications for The Rational Group, came a day after attorneys for the American Gaming Association wrote in a legal brief that PokerStars had been a “criminal enterprise for many years.”

Caesars representatives declined to comment on any “assertions” made by PokerStars.

Hollreiser, who is based at The Rational Group’s corporate offices in the Isle of Man, said PokerStars “declined the offer because we had no plans to acquire another casino in the near term.”

Hollreiser first raised the potential Rio-World Series of Poker deal with Forbes.com. He forwarded a similar response to the Review-Journal on Tuesday.

The Rio, however, has long been reportedly up for sale.

Caesars is a member of the American Gaming Association, which told the New Jersey Casino Control Commission and the Division of Gaming Enforcement that PokerStars had “operated a business with a history of intentional, uninterrupted criminal violations.”

New Jersey attorney Brian Molloy wrote at the conclusion of the 26-page brief that PokerStars’ petition should be denied.

IGT CEO Patti Hart, a member of the association’s board, said Tuesday that the vote “wasn’t unanimous.”

PokerStars announced in January that it would spend an estimated $50 million to buy the troubled Atlantic Club on the Boardwalk.

Hollreiser said the company’s request to operate the Atlantic Club was for regulators to determine, “not self-interested partisans picking a public fight.”

PokerStars is working with New Jersey gaming regulators to finalize the takeover of the casino, which ranked 10th in gaming revenues among Atlantic City’s casinos in 2012.

The brief detailed PokerStars’ settlement last summer with the U.S. Department of Justice after a 15-month legal battle. Three senior officers of PokerStars were charged in April 2011 with bank fraud, money laundering and running an illegal Internet gambling enterprise.

The American Gaming Association said in the brief that New Jersey should reject PokerStars because of its past transgressions.

“Any action allowing PokerStars to be licensed would send a damaging message to the world of gaming, and to the world beyond gaming, that companies that engage in chronic lawbreaking are welcome in the licensed gaming business,” Molloy wrote. “That message would undermine public confidence in gaming regulation and could cripple the industry’s public image for many years.”

In Nevada, PokerStars cannot apply for a license under the state’s newly signed Interactive Gaming Act. The law includes a condition that prohibits licensing any company that accepted wagers from U.S. customers after Dec. 31, 2006, for at least five years.

A provision does allow the Nevada Gaming Commission to waive the exclusion. PokerStars would have to file an application for the waiver and participate in a public hearing to present evidence and witnesses to support its position.