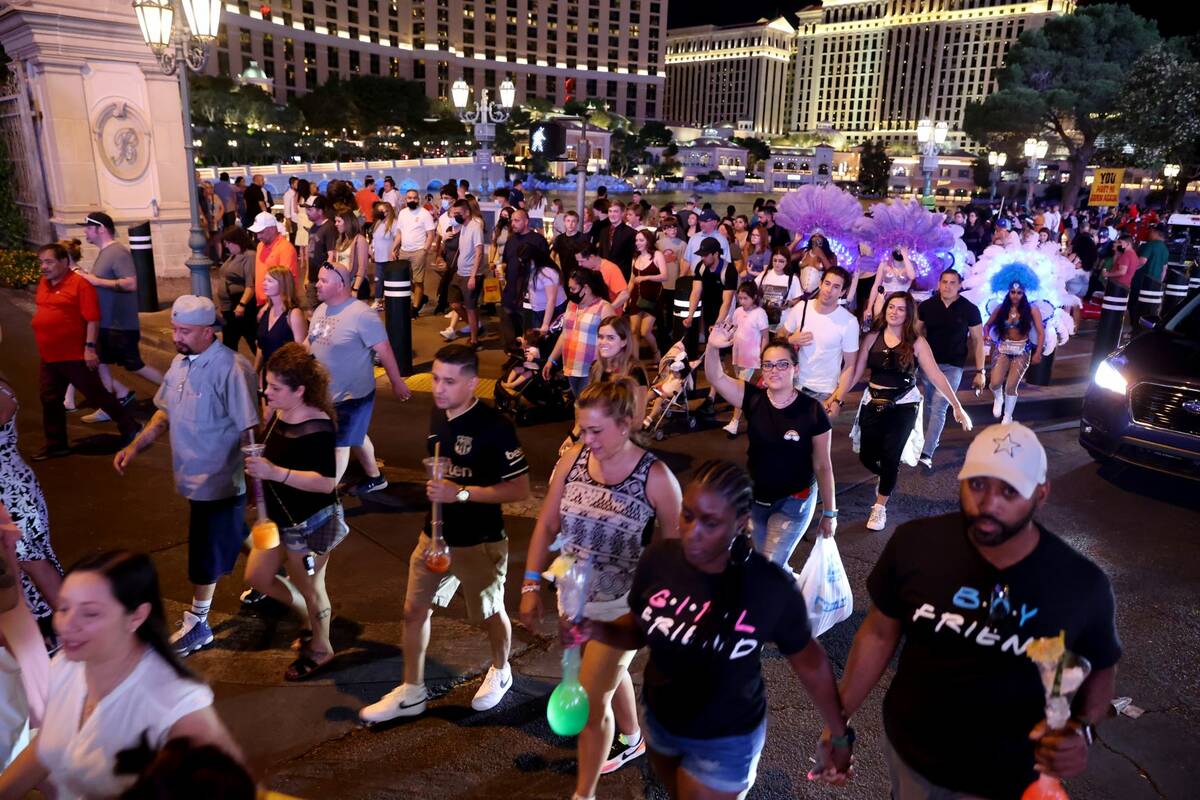 Crowds in front of the Bellagio on the Strip in Las Vegas Friday, May 28, 2021. (K.M. Cannon/Las Vegas Review-Journal) @KMCannonPhoto

If you thought second-quarter earnings were good, wait until you see what publicly traded resort and tourism companies potentially have in store later this year.

Of the 23 companies, only five registered net losses in their second-quarter earnings reports for the period that ended June 30.

Scott Longley, co-author of the Wagers.com Earnings+More newsletter and based in the United Kingdom, watches casino companies and their stock prices worldwide.

“The figures from the major gaming houses were pretty much blow-out figures,” Longley said of the second-quarter turnaround.

“This is the thing about the difference between U.S. gaming markets and every other gaming markets around the world is that the U.S. has been up and running since the early part of this year,” he said. “Certainly the first-quarter results indicated already that things were going quite well by March and April and then the second-quarter results were blow-out results.”

Longley said it’s no coincidence that Sands and Wynn share the distinction of having exposure in Macao.

“The high-end clientele is simply not there,” he said. Now, Macao operators are competing for the same territory, which is the mass market clientele, Longley said. “They’re waiting for the people to come back, the international travel through China.”

During the earnings call, Sands Chairman and CEO Rob Goldstein acknowledged that the company’s results continue to reflect the pandemic’s impact. “Our Macao performance reflected sequential improvement but pandemic-related travel restrictions continue to impact our performance but we remain confident in the eventual recovery in both Macao and Singapore,” he said. “We cannot define the timeframe for the recovery but it’s underway and will continue in 2021.”

The lack of international high-rollers from Asia also is affecting some operators’ Las Vegas operations, but at least that has been mitigated by strong regional demand. Las Vegas already has seen a potential preview of what lies ahead in third-quarter results with the Nevada Gaming Control Board’s report of record gaming win in the state in July, the first month of the quarter.

“Las Vegas continues to enjoy a rebound as we have seen from the Q2 numbers and the recently announced July numbers,” said Brendan Bussmann, director of government affairs for Las Vegas-based Global Market Advisors. “However, the rest of Q3 will be interesting as the mask mandate affects the rise in numbers because of the latest (COVID-19) variant. July’s record gaming revenues bode well for a start but it’s only a portion in a still uncertain time.”

While the second-quarter numbers have been good, there’s still a long road back to levels prior to the pandemic, he said.

“While most companies continued to build upon the strong results from Q1 to Q2, those with international exposure will see the bump later on when these markets return,” Bussmann said. “This is going to be a long recovery as we emerge from the Great Shutdown but the early bounce shows promise for the future.

“I believe we are still pretty far out from the light at the end of the tunnel, especially for the Strip. You still have two major tranches of our revenue to come with (meetings, incentives, conventions and exhibitions) just beginning to return with a little short-term uncertainty and the return of the international customer which is probably still a few months off at a minimum.”

Like Bussmann, Longley remains a little jittery about whether COVID-19 could rise up and slap the gaming and tourism industries again.

Longley and Bussmann concur that casino and tourism operators have learned substantially from the experience of the shutdowns and how to react to them. While business has rolled on, the closures haven’t been particularly kind to employees laid off from their resort jobs or from airlines that haven’t been able to match pilots and flight attendants with their growing capacities as they emerge from the pandemic.

“The huge disruption has made them rethink how they go about their businesses and that has led to some permanent changes when it comes to cost-cutting,” Longley said. “(We saw) the end of the loss-leader buffet and that’s just indicative of a sign that they’ve fundamentally rethought their businesses.

“They’ll be much more buffered for future downturns,” he said.

“They’ll be much more resilient businesses because they’ll be running at lower costs and, presumably, the lessons they’ve learned is how to cut costs quickly.”

Bussmann said efficiencies are likely at their highest point ever in the industry. “We learned a lot from the Great Recession but we learned a lot more from the Great Shutdown. No one ever budgets for zero but in this case we’ve learned to manage properties in a more efficient way along with the challenges of labor issues and rising costs of goods.”

Bussmann believes the rebound will continue beyond the third quarter and that Las Vegas’ marketing of sports will also help.

“Las Vegas has still room to build upon as you still have growth opportunities with (meetings, incentives, conventions and exhibitions) and international,” he said. “This does not include what we will also start to see with sports as we will see a (Las Vegas) Raiders bump because of the additional guests that the stadium will generate. Sports can help be an additional driver to help sustain and build upon the recovery.”

The NFL’s Raiders relocated to Las Vegas in 2020, but this year will be the first opportunity for fans to fill Allegiant Stadium for home games.