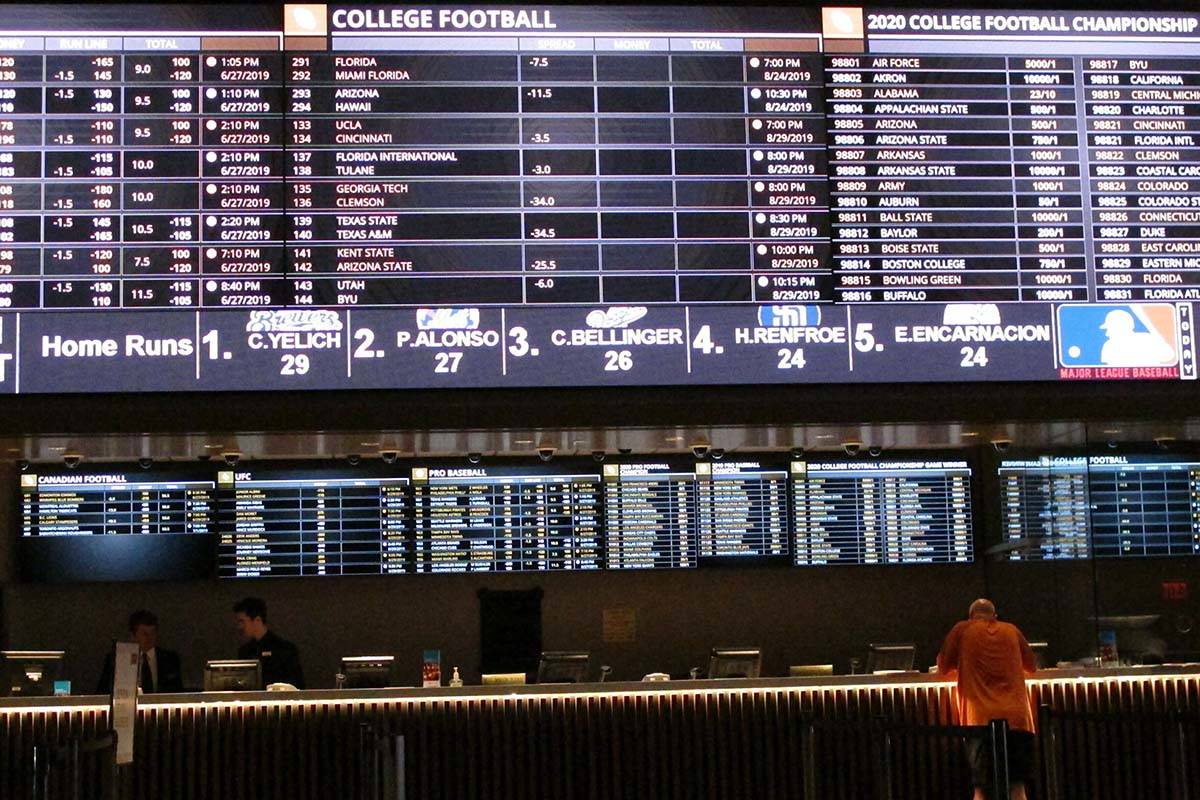 In this June 27, 2019 photo, a gambler places a bet at the new sportsbook at Bally's casino in Atlantic City, N.J. (AP Photo/Wayne Parry)

New Jersey books took in $748.6 million in wagers, including $678.7 million through online apps.

The total beat the state’s own record of $668 million bet in August. The previous record handle was recorded in Nevada, $614 million in November 2019.

From the handle, New Jersey books kept $45.1 million after paying off winning wagers.

Most of the bets placed in September, $91.1 million, were parlay wagers, bets in which a player must correctly predict two or more correct outcomes.

While much of the handle was attributed to the return of NFL and college football games, a New York-based gaming analyst said the high total handle occurred because an unprecedented number of sports were converging at the same time.

Carlo Santarelli of Deutsche Bank projected the potential of $20 billion in annual sports wagering if every state adopted some form of sports betting. Santarelli also noted the 6 percent hold experienced in New Jersey was less than normal, which he attributed to competing sportsbooks taking less commission when accepting wagers.

“Beyond the leap of full legalization and every state behaving like New Jersey in terms of per-capita spend, one must also recognize that September contained the NFL, the National Hockey League playoffs, the National Basketball Association playoffs, NCAA football, Major League Baseball, the U.S. Open tennis and the U.S. Open golf,” Santarelli said in a note to investors. “Said differently, it was, hopefully, a once-in-a-lifetime confluence of sports, and even when annualized, we would argue there is still little to no evidence of a $20 billion total annual market being remotely possible.”

New Jersey’s record sports betting numbers offset a 15.1 percent decline in casino win. In September, casinos were allowed to reopen restaurants and resume food and beverage service on casino floors, shuttered since March by health and safety rules established during the coronavirus pandemic.

The Division of Gaming Enforcement reported total gaming revenue of $323.3 million, a 6.5 percent increase from September 2019. Analysts attributed the boost to pent-up demand.

“These results were promising in the midst of continuing travel advisories that decrease visits from out of state, as well as restrictions on capacity, amenities and entertainment that have made 2020 not reasonably comparable to last year,” James Plousis, chairman of the New Jersey Casino Control Commission, told The Associated Press.

MGM Resorts International’s Borgata property had the greatest amount of casino revenue in the market, $64 million, which was 2.8 percent less than in September 2019.

Ocean Casino had the best percentage increase over the previous year, 21.9 percent to $29.6 million for the month.