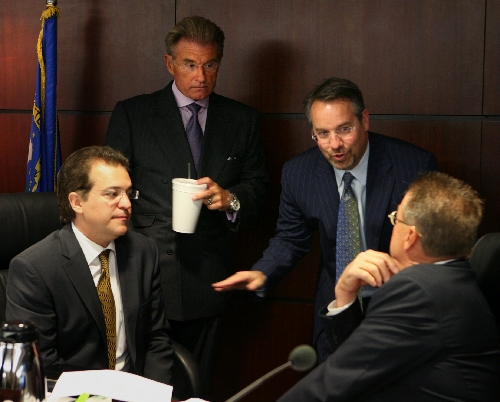 Bally Technologies received the initial unanimous approval from the Nevada Gaming Commission, followed by rival International Game Technology about 45 minutes later. The approval allows the companies to provide casino operators with systems to run online poker websites for players within the state’s boundaries.

Being first was not lost on Bally Chief Executive Officer Richard Haddrill. The companies are fierce competitors for worldwide slot machine market share and have sued and countersued each other countless times over alleged copyright infringement.

“We’ve been around for 80 years,” Haddrill said with a smile.

Bally and IGT now have to wait for individual casino operators to get licensed for interactive gaming.

“I want to make it abundantly clear, IGT has absolutely no intention to compete with our casino partners,” IGT Executive Vice President of Emerging Businesses Robert Melendres told the commission.

Haddrill and Melendres said their companies could have online poker systems up and running as soon as state gaming authorities sign off on the technology.

Haddrill said Bally is already operating a free-play poker website for Golden Nugget and the company has deals in the works with other casino operators.

“It just comes down to the state’s approval process,” Haddrill said.

IGT, through the purchase of European interactive gaming companies, has been operating Internet gaming in jurisdictions where it is legal for 10 years.

“No other company has the experience we have in Internet gaming,” Melendres told the commission.

Gaming regulators expressed concern with both companies over their purchases of Internet gaming technology from other markets, mainly because the businesses at some point accepted wagers from the United States.

However, gaming commissioners commended both companies on how they handled the purchases and their diligence in cleaning up the operations.

“We felt we could cleanse Entraction,” Melendres said. “If not, we would have walked away from the deal.”

Gaming Commission member Tony Alamo Jr. said he reached a comfort level with the online businesses, but wanted to make it clear that “this wasn’t a way for these companies to get in through the back door.”

Bally and IGT plan to use technology from the European companies because they have systems to police underage gambling and ensure the wagering is taking place in Nevada.

Gaming Commission Chairman Pete Bernhard said “striving for perfection” is not an option. Because Internet gaming is whole new territory for Nevada’s gaming industry, he asked representatives from both companies to offer advice to regulators.

“Each application is going to be taken on a case-by-case basis,” Bernhard said.