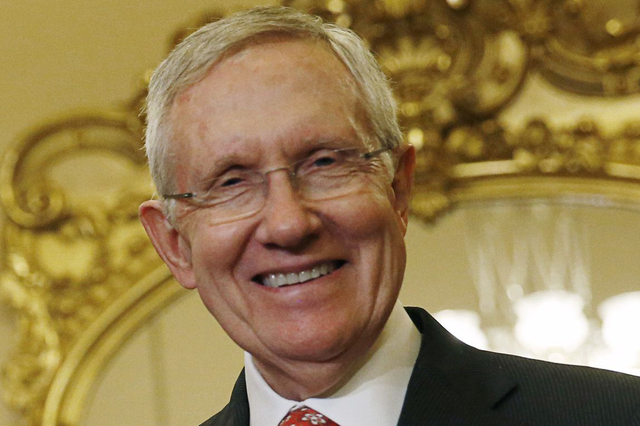 WASHINGTON — Sen. Harry Reid said Friday that Congress next year will take up legislation to outlaw Internet gambling, and he plans to support a ban while trying to gain an exemption for online poker.

With billionaire casino owner Sheldon Adelson, an ardent opponent of Internet wagering, pressing for action, House and Senate leaders were lobbied to place a prohibition on online gambling into a year-end spending bill. The effort failed in the closing days of the lame-duck session.

The legislation would have nullified a 2011 Justice Department opinion that the relevant law, the Interstate Wire Act of 1961, only outlaws sports betting online. The opinion sparked a burgeoning industry as three states — Nevada, Delaware and New Jersey — have legalized forms of online gambling while other states are considering doing the same.

Reid said he and Adelson agree that online gambling should be prohibited.

“I think the proliferation of gambling on the Internet is not good for our country,” the Democrat who once served as chairman of the Nevada Gaming Commission said in an interview. “I think it is an invitation to crime. I think it is hard to control for crime when you’ve got brick-and-mortar places, let alone something up in the sky someplace, and it is very bad for children.”

“If there is a chance to (legalize) poker, I will do that, but I am not for the Wire Act,” Reid said. Nevada has legalized poker online, with Caesars Entertainment and Michael Gaughan’s South Point operating poker sites. A third entry, Station Casinos, recently closed its site.

Reid’s role in the lame-duck negotiations was fuzzy. He said Friday he was prepared to try to carve out an exemption for poker in the Senate if the House had passed an online gaming ban. It was not clear how that would have happened in the fast-moving closing days.

If a Web gambling ban advanced, “then maybe there would have been an opening somehow for poker … but until that happened I had no chance to do anything,” he said.

Reid said the only way legalized poker can pass Congress is if it is coupled with legislation that prohibits other forms of online gaming.

“Just to get poker alone is not going to work,” Reid said. “We tried that.”

Reid denied one rumor that became widespread in recent months. He said he and Adelson did not have a gentlemen’s agreement that Adelson, a deep-pocketed Republican conservative, would help Reid get re-elected in 2016 if Reid helped pass an online gambling ban.

“No,” Reid said. “Sheldon Adelson and I have been friends for a long time but on politics he and I don’t agree, so we don’t do politics. I’m glad he joined my position (on Internet gambling), but no, there was nothing” on a deal between them.

Reid was interviewed in his Capitol office as the Senate debated its final bills before adjourning, and as he was completing his term as Senate majority leader. With Republicans gaining Senate control in the November elections, Reid will return in January as minority leader.

■ Reid said if he wins re-election in 2016 and if Democrats regain control of the Senate, he expects to run for majority leader again. He said he plans to start interviewing potential campaign advisers in February as he ramps up a 2016 re-election bid. Asked why he wants to serve six more years in the Senate, he said he has to work. “Work is good for people,” he said.

■ Reid will be 76 years old on Election Day 2016 and would be 77 when he would start a new term. As to whether his age might be a factor in the election, he said, “As Ronald Reagan said, I’ll see how much experience my opponents have.”

■ Reid said he never received an explanation after his alma mater, Southern Utah University, removed his name from a campus building in August after a group of Cedar City residents petitioned for the change. “It’s just the right-wing wackos in Utah, no big surprise there,” he said chuckling. “I think they lost more than I did.”