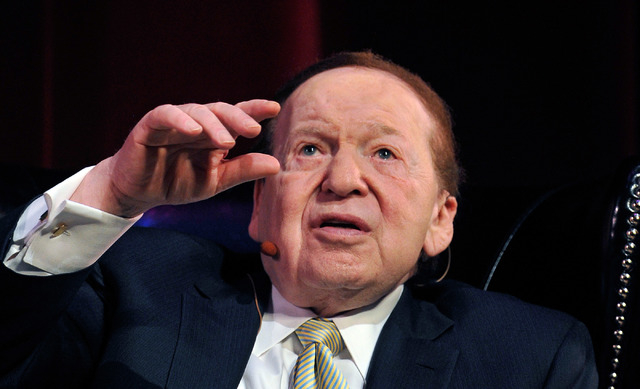 Sands is on track to add thousands of hotel rooms by the end of next year after it completes a St. Regis Tower and a Paris-themed casino in the lucrative Chinese gambling enclave of Macau, according to CEO Sheldon Adelson. The company also has its eyes on Japan and South Korea.

“They present the most promising and meaningful development opportunities in the world,” Adelson said of the Asian nations, adding that casinos would help their host countries by attracting investment, increasing employment and expanding their tourist appeal.

Properties in Asia have driven much of the company’s revenue growth. In the quarter that ended March 31, Sands’ net income climbed 36 percent compared with the same period last year. Revenue rose 21 percent to $4 billion.

Adelson, one of the world’s richest men, also used the meeting to reiterate that he is “very, very much against Internet gaming.” The fight against online gambling has become a signature issue for the casino mogul, who supports a federal ban on the practice and is bankrolling a coalition against it.

He framed the matter as a moral issue, saying he didn’t want poor families to have such easy access to casinos. But he also made a business case for his crusade.

“Once the employment of land-based casinos is done away with by Internet casinos, they can’t be replaced,” he told investors.

Adelson said the company is enlisting a search firm to find a replacement for 76-year-old President Michael Leven, who announced last month that he plans to retire at the end of the year.

But asked whether he was looking for a successor on account of his age, the 80-year-old Adelson said he has no plans to step aside.