From the first cheers on Fremont Street at 12:01 a.m. Thursday to the quiet hum of traffic at midnight Friday, Review-Journal photographers captured the reawakening of Las Vegas after the coronavirus pandemic shuttered the city’s casinos for 78 days. Revelers on the Strip found sights both familiar — showgirls, flowing fountains and the bubbly blips and bings of slot machines — and newfangled: face masks, sanitizing stations and temperature checkpoints.
Las Vegas Review-Journal
June 5, 2020 - 9:14 am 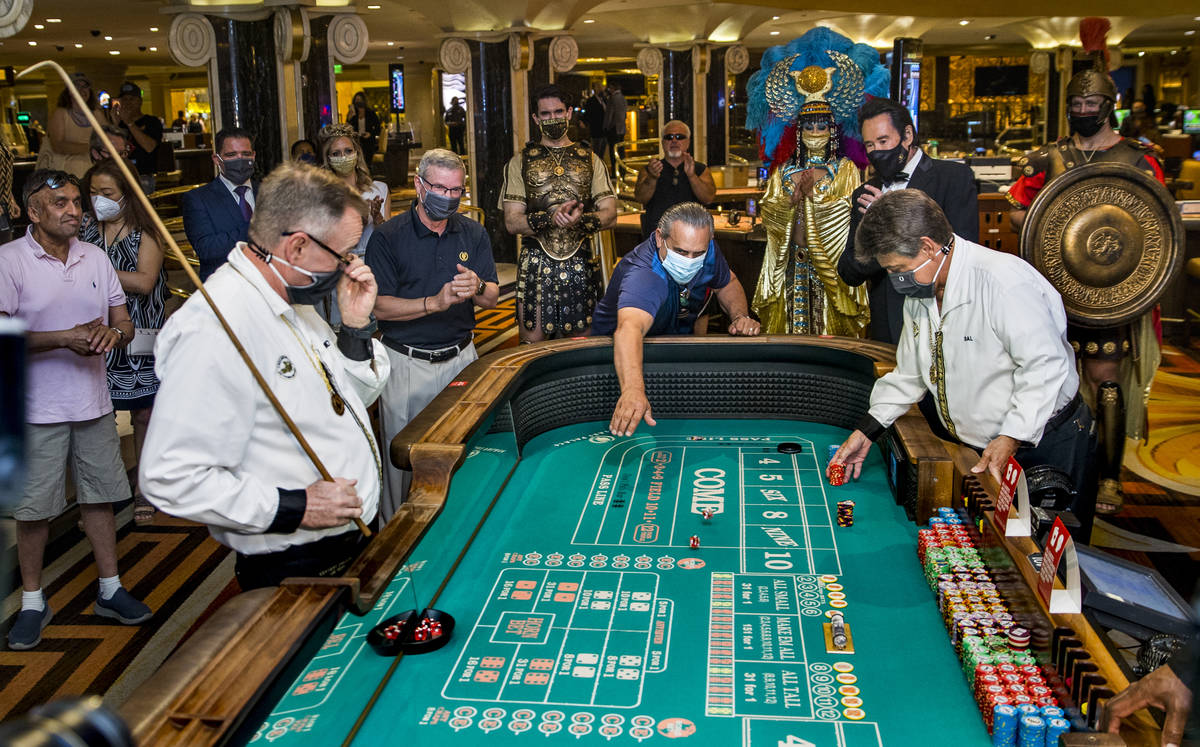 Eager to be part of the historic reopening of casinos in downtown Las Vegas, about two dozen people crowded around the glass doors at the Golden Nugget just before midnight. As images of fireworks filled the massive LED screen above them, many recorded the moment on their cellphones.

A few blocks away, visitors at the D Las Vegas tried their luck at slot machines. Most units had seats removed so only one person can play at a time.

A lull in the action gives sanitation crews in neon vests a chance to mop the walkway at The Fremont Street Experience, creating puddles of reflected light.

A worker preps the buns, condiments and, of course, the hot dogs at American Coney Island Chili Dogs, where there is almost always a line.

Workers tested the 460-foot plumes of water at the beloved Fountains of Bellagio, one of the most recognized and photographed landmarks in the country. The first “official” show began at 9:30 a.m. with a special performance choreographed to the Shaker hymnal “Simple Gifts,” which was dedicated to the first responders and front-line workers during the coronavirus pandemic. Elvis’ “Viva Las Vegas” followed.

It was 82 degrees when the sun rose at 5:23 a.m., glinting off the gold-tinted windows at Mandalay Bay. The temperature soared to 108 degrees in the afternoon amid an excessive heat warning.

Juan Hernandez removed temporary fencing outside The Venetian that had been in place since the closure. Gondolas returned to the canals, with gondoliers voices audible for the first time in more than two months.

Bellagio employees arrange velvet-roped stanchions in the walkway connecting the parking garage to the lobby so that visitors will enter in one direction.

An armed guard surveys the gaming floor at Caesars Palace in front of a plaster reproduction of a famous work of ancient art depicting Roman soldiers capturing women to marry.

The Bellagio Conservatory’s new display was originally designed with a Japanese theme to coincide with the Tokyo Olympics. The installation includes a kimono-clad Hello Kitty (made with 25,000 carnations) and a scaled-down replica of the Osaka Castle.

Sgt. Peppers smiles brightly as he poses for a snapshot at the landmark “Welcome to Fabulous Las Vegas” sign with friend and caretaker, Sylvia Goldych, who was visiting from California.

The Big Apple Coaster at New York-New York was back in action, its taxi cab-themed trains whooshing through its famous 180-degree twist-and-dive maneuver.

David Alexander of Beaumont, California, cools off with daughters Isabella, 8, left, and Elise, 7, in the Bellagio pool.

An acrobat performs at Circus Circus, one of a dozen daily specialty acts featured at the Carnival Midway.

Nighthawks sip wine and cocktails at The Mayfair Supper Club bar at Bellagio, separated by partitions.

LaShonda Reese commands the stage at The Mayfair Supper Club at Bellagio.

A street cleaner pushes his cart across a walkway as Wayne Newton seemingly offers a supportive smile from signage above. Newton attended the reopening of Caesars Palace earlier in the day for the first dice throw at the craps table.

Tattoo artist Jacob Wilcox uses his needles to create an “angry Jayhawk” on Las Vegan Patrick Belcastro’s chest at Downtown Tattoo. The cartoon-looking bird, with big shoes and even bigger beak, is the mascot for the University of Kansas.

Ciara Radic celebrated her 40th birthday at the Skypod atop The Strat, where she and her husband, Alex, shared a blissful moment. As they watched the sun slip away, they had the entire balcony to themselves.

Three police officers have a conversation near the entrance to the Flamingo as foot traffic slows down to a trickle. A small group of protesters walked along the Strip a few hours earlier but disbanded peacefully.

A blur of headlights fills Las Vegas Boulevard, and the city that doesn’t sleep slows a bit as people head home. The beams almost seem like an extension of the still-glowing signage, beneath a marquee that says it all: Now open.