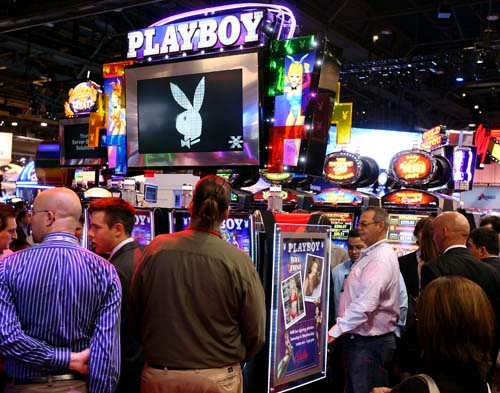 Goetz, who runs five small casinos in Michigan’s Upper Peninsula, and De Lugo, who oversees slot operations at a casino north of Fresno, Calif., said they were either buying or looking to lease the newest slot machines and gaming technology.

The big casino operators have continued to tighten their grips on capital expenditures. The recession caused companies to hold back on buying new gambling equipment to reduce operating costs.

"There are specific companies that have continued to actively replace their slot product over the past couple of years with the view that it is a critical revenue driver for their regional business and is not discretionary," Katz said. "Meanwhile, other casino companies indicate to us that they intend to remain conservative."

That’s why Goetz, chief operating officer of Kewadin Casinos, and De Lugo, director of slot operations for Chukchansi Gold, offer a glimmer of revenue-producing hope. Both said they were actively looking at purchasing slot machines or leasing equipment.

The deals won’t be huge — the Kewadin Casinos have a little more than 2,000 machines combined while Chukchansi has 2,000 games.

But a deal is a deal.

"We’ve seen the importance in having the best products on our slot floors," Goetz said. "But we’re also seeking good deals and fair prices."

De Lugo said two competitors are changing out their slot machine floors and the Chukchansi casino needs to keep pace. Instead of buying new machines, De Lugo is in the market for participation games in which the casino leases the slot machines and shares the revenue with the slot machine manufacturer.

"That type of option is helpful for a casino our size," he said.

Slot machine executives are hopeful that casino company decisionmakers will take their cues from regional competitors and will see the need to purchase new gambling equipment.

"I think the simple story is that operators have fixed their balance sheets and now they need to look at their gaming operations and offer the best-quality products to their customers," Bally Technologies Chief Executive Officer Richard Haddrill said. "We have been more aggressive in helping finance terms for customers. They can basically pay for the product as they earn money from it."

American Gaming Association President Frank Fahrenkopf Jr., whose Washington, D.C.-based organization co-produced G2E, agreed that casino operators may have reached a point where they need to start reinvesting in their gaming equipment floors.

"If it’s kicked up a bit, then it’s good for the manufacturing side of the industry," Fahrenkopf said. "That is the big question going into G2E."

WMS Industries President Orrin Edidin said the Waukegan, Ill.-based manufacturer has continued to sell slot machines during the recession. Yes, he said, the industrywide, often-discussed slot machine replacement cycle, in which thousands of games would be changed out for newer equipment, never materialized.

"The replacement market is starting to crawl back slowly," Edidin said. "The operators are seeing a leveling of the competitive playing field."

The perception of slow sales hasn’t stopped WMS from producing new games. Edidin said the company invested 15 percent of its annual revenues of $765.1 million in fiscal 2010 into research and development.

Comedian and game show host Howie Mandel helped launch the "Deal or No Deal" slot machines at the Atronic-Spielo booth.

Actor Ken Jeong, who appeared in the Las Vegas-themed movie "The Hangover" cut the ribbon for the G2E and made an appearance at IGT’s booth to promote the slot machine based on the film.

IGT is offering a high-definition 103-inch video screen for its Center Stage bank of multiple player slot machines, offering previews of the company’s games based on "American Idol" and "The Dark Knight."

Credit Suisse gaming analyst Joel Simkins said the slot makers packed their booths with new products with cutting-edge technology and innovation. He expected attendance at the show to be up some 14 percent from a year ago.

"Hopefully this is a sign that customer demand and interest levels are improving heading into 2011," Simkins said. "Our only concern centers around product pricing, which in our view could be pushing the edge of the envelope given still tight capital budgets."

IGT Chief Financial Officer Patrick Cavanaugh said his company’s newest games are built on a new platform and cabinet where games can be changed with signs and software downloads, saving time and cutting costs.

Based on the sales success this year of its slot machine based on "Sex and the City," the popular television series and movies, IGT used G2E to launch several new themes, including the movie "Dirty Dancing." Cavanaugh said "Sex and the City" was one of the company’s highest-selling games, with more than 1,000 machines placed nationwide.

"We’re looking for the proper balance between the licensed titles and the games we’ve developed," Cavanaugh said.

All the bells and whistles may not have resonated with some potential buyers.

"Although we appreciate the improvements in product offering, our channel checks do not yet indicate immediate improvement in demand trends," Katz said.

"Our view remains that the gradual recovery in the economy and the opening of new casinos in late 2011 and 2012 are the key measurable catalysts for new and replacement slot sales."