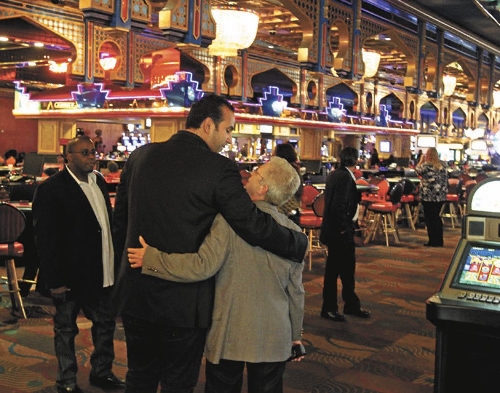 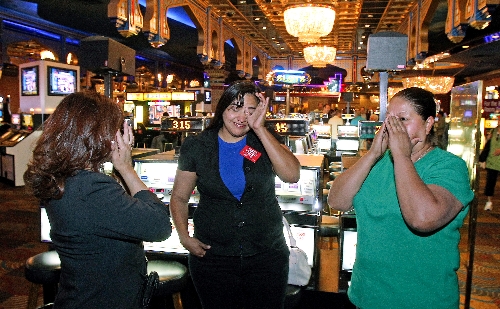 In the end, it wasn’t the celebrities who came to bid farewell when one of the last of the Strip’s Rat Pack era hotel-casinos ended its 59-year run Monday.

It was the average folks.

Longtime Sahara customers and employees showed up in the morning and quickly turned a somber occasion into a reunion.

Rules prohibiting photo taking inside a casino were quickly discarded. Longtime employees hugged each other while posing for pictures in front of some of the Sahara’s recognizable locations.

Many customers and former employees came to play the Sahara slots one last time; others for a last hand of $1 blackjack. Most gathered at The Thirsty Camel, the Sahara’s center bar just past the front doors, to swap stories.

Among them was Eddie the Hat.

“Eddie,” whose real name is Charles Krebs, perched on a corner bar stool wearing his fedora and exchanged stories with many of the Sahara poker dealers he grew to know during his 57 years gambling at the casino.

Krebs was such a popular regular the Sahara gave him his own name badge for his 75th birthday.

Even SBE Entertainment CEO Sam Nazarian, who bought the Sahara in 2007 and announced its closing in March after finding it “no longer economically viable” to operate the 1,720-room hotel-casino, came by to bid Krebs a fond farewell.

If there were hard feelings about the closing, Eddie the Hat was playing his cards close.

“This was the place to be in Las Vegas,” Krebs said. “It’s a very sad day, but we have a lot of memories and a lot of stories about the Sahara. It was a great place.”

Poker dealer John Idle, whose 17 years at the Sahara ended a few weeks ago when the poker room was closed, agreed that the Sahara may have been the last Las Vegas casino of its era.

“I didn’t want to go anywhere else,” Idle said. “I was happy here.”

The Sahara opened in 1952 and became a haven for many of the Strip’s legendary performers in the 1960s and 1970s, including Johnny Carson, Don Rickles, Tina Turner and Dean Martin.

As development moved south on the Strip, the Sahara was seemingly left behind. The halting of construction projects on the north end of the Strip sealed the Sahara’s fate.

The Sahara began gradually shutting down over the weekend. The House of Lords served its last steak Saturday night, and by 10 a.m. Monday casino table games were being locked down. About half of the slot machines went dark 90 minutes later. Final hotel check-out was at noon. The NASCAR Cafe seated one last diner at 12:30 p.m.

By 1 p.m. all that was left in the Sahara gift shop were a large “going out of business” sign and decks of used playing cards, at $1.75 apiece. The cashier’s cage stopped selling chips by noon.

At 1:30 p.m., an announcement came over the loudspeakers that the hotel would close at 2 p.m. Entrances were blocked to keep more people from coming in, and the last slot machines were shut down.

The reunion ended when the bar stopped serving drinks, and the doors were padlocked at 2 p.m.

Nazarian, who spent much the day walking the casino with executives from SBE and Stockbridge Real Estate, his private equity partners, posted a hand-written letter on the front doors, saying, “Be back soon! Thank you for 59 years.” He signed and dated the note on hotel stationery.

Nazarian said he wanted the Sahara’s last day to be about the employees.

“It’s almost been like someone who passed away and the friends come back to share stories,” Nazarian said. “We thanked the employees for holding the property together for as long as they did. It’s now time to start a new journey.”

Nazarian, who had friendly exchanges with guests and Sahara workers, hasn’t said what he plans to do with the 18-acre Sahara site. He wasn’t ready to discuss the future Monday.

Many longtime employees and customers said it was time to say good-bye.

Joyce Grasso was a Sahara cocktail waitress for 38 years. She retired six years ago but knew she wanted to spend the hotel’s final hours among her former co-workers, such as Nancy Husman, who served cocktails at the Sahara for 40 years.

“When I left, it was time,” Grasso said.

Debra Burgos of Las Vegas came back to the Sahara on Monday for the first time since her father, Samuel Kitterman, passed away in 1996. She carried an old Sahara employee newsletter with an article about her father, a Sahara casino executive from 1952 until 1995 who was known throughout the property as “Mr. Sahara.”

After he died, she said, it was “too emotionally painful” to be at the Sahara, a place where she grew up.

“I would wait for my father to get off work and the bartender would make me Shirley Temples,” Burgos said. “I would sit a the Big 6 wheel with the dealer named Jimmy until it was time to go home. Las Vegas was such a different place then.”

On Monday, Burgos and her mother had breakfast at the NASCAR Cafe and walked the property, one last time.

“My father loved the Sahara. This place was a big part of my life,” Burgos said.

Karl Schrom, 86, proudly showed off photos of himself performing as an acrobat at the Sahara. His act, The Carsony Brothers, opened the inaugural showroom performance of Ray Bolger back in 1952.

“My photo went all over the world,” Schrom said. “It was a great time.”

Meanwhile, in the casino, longtime friends Vicki and Dave Woodward and Colleen and Rob Ferguson hoped the Sahara slots would pay off one last time. The residents of Victoria, British Columbia, planned a trip to Las Vegas around Rob Ferguson’s birthday on Sunday, knowing full well the Sahara was closing.

“We all enjoyed coming here over the years,” Rob Ferguson said. “It was the place to get an early morning breakfast and then play some $1 blackjack. We’ll miss it.”