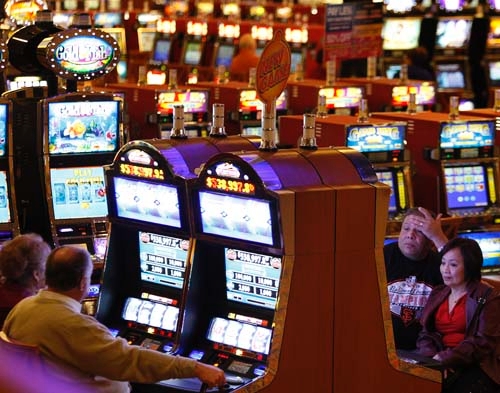 There is something to be said for doing things the old-fashioned way.

As the economy crumbled around him, Gaughan didn’t change the operational style at the 2,163-room hotel-casino.

While the rest of the gaming industry retrenched, Gaughan added a third hotel tower, expanded and updated the casino floor and increased the South Point’s amenities. Next week, Steak ‘n Shake, a Midwest culinary staple, opens its first location west of Texas inside South Point, adding about 70 more workers to the property’s 2,200-person work force.

Gaughan, 67, wholly owns the hotel-casino. He paid for construction and development projects through South Point’s cash flow, rather than taking out costly loans and adding on debt.

Unlike the major Strip casino operators, many of which have mind-boggling multibillion-dollar debt loads, South Point is debt-free.

Still, the operation, which marks its fifth anniversary Dec. 22, has had its share of bumps.

Gaughan didn’t lay off workers over the last two years, but he did freeze hiring. Double-time days were reduced and the company’s 401(k) retirement plan match ended. Salaries were frozen in 2009 but raises were given back this year to cover rising health care costs.

“Every month is grind,” Gaughan said.

New customers to Las Vegas have been scarce, he added.

“If you’re relying on just the locals market, you have problems,” Gaughan said. “The scary part is that I thought we would be turning the corner by the end of the year. I just don’t see it. I think we’re looking at the end of next year.”

South Point harks back to the days when solo Strip casino operators outnumbered corporate-owned properties. Gaughan, who was inducted into the Gaming Hall of Fame last year by the American Gaming Association, operated the Barbary Coast on the Strip for more than a decade as a single entity before developing the Coast Casinos brand.

Brian Gordon, a partner in Las Vegas-based financial consulting firm Applied Analysis, said South Point is at a competitive advantage because of its lack of debt and private ownership. Gaughan can compete on price and product without having to worry about debt covenants or shareholders seeking a minimum return threshold.

“It’s an entirely different dynamic,” Gordon said. “At its most basic level, you have (an) operating hotel-casino essentially running debt-free. You have much more flexibility to operate.”

During December, South Point is the hub of activity for the National Finals Rodeo. However, Gaughan said the economy has affected customer spending habits.

“The rodeo has been good, but there is still some weakness in how people are spending their money,” Gaughan said. “The people who used to come for 10 days are now coming for just five. Those who came for five days are staying for only three.”

South Point, which runs at about 80 percent occupancy, found ways to bring people into the building. The 4,500-seat arena and equestrian center has been occupied for 230 days this year hosting boxing events, bull riding competitions, concerts and college basketball tournaments, in addition to national equestrian events.

The hotel also attracts customers from the neighboring Grandview at Las Vegas time share, which has 1,400 units and is opening another 400 units next month.

“They have had to create their own critical mass because they aren’t going to get a lot of foot traffic,” Gordon said of the property located on Las Vegas Boulevard about seven miles south of Mandalay Bay, which is considered the southern end of the Strip.

The surrounding area is much different from what Gaughan expected when he acquired the then-10-month-old South Coast from Boyd Gaming Corp. in October 2006. The hotel-casino had been in its design phase when Gaughan sold Coast Resorts to Boyd for $1.3 billion in July 2003.

Gaughan, who didn’t enjoy the corporate world, exchanged his stock in the company for the hotel-casino, a deal valued at $512 million.

He set about expanding the renamed South Point but many of the planned residential developments in the southern part of the Las Vegas Valley were not built as the housing market collapsed. In March 2009, a new competitor, M Resort, entered the market, taking some of South Point’s business.

“They’re a good operator,” Gaughan said. “It will be interesting to see how they do in the Las Vegas market.”