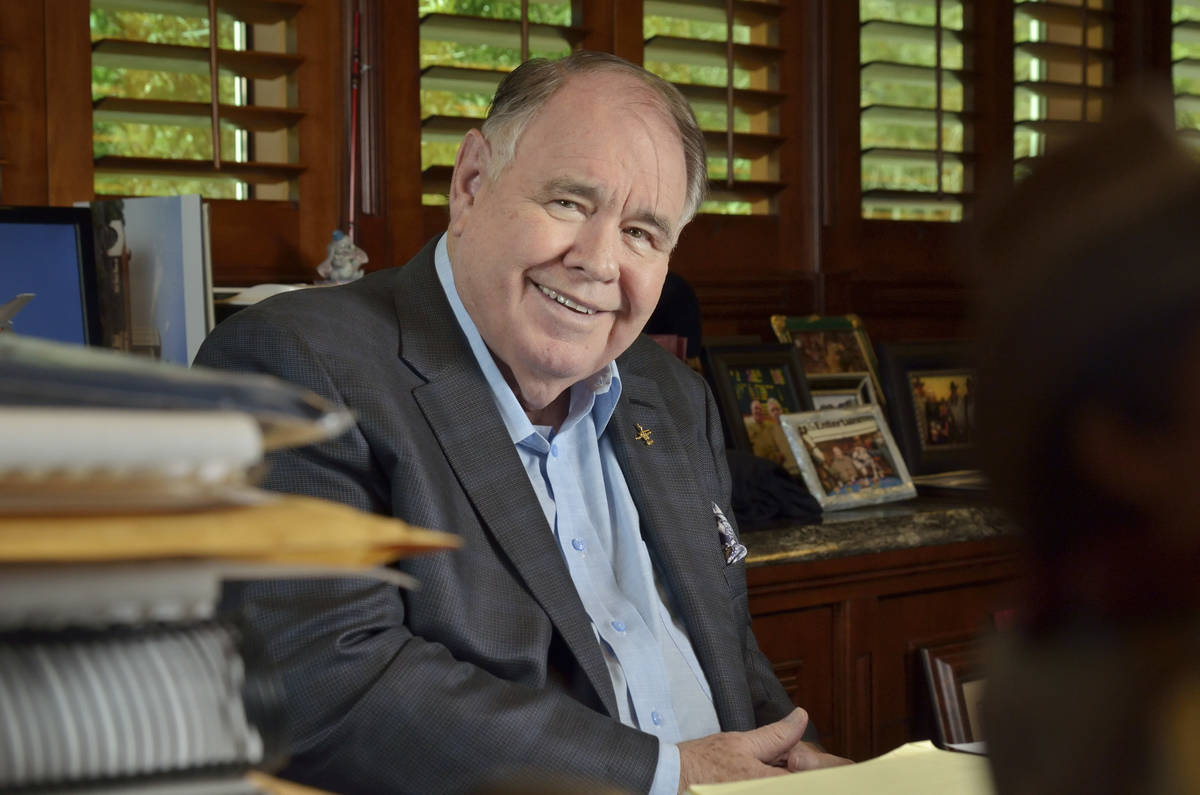 South Point hotel-casino owner Michael Gaughan is shown during an interview at the property at 9777 S. Las Vegas Blvd. in Las Vegas on Thursday, May 10, 2018. (Las Vegas Review-Journal, file) 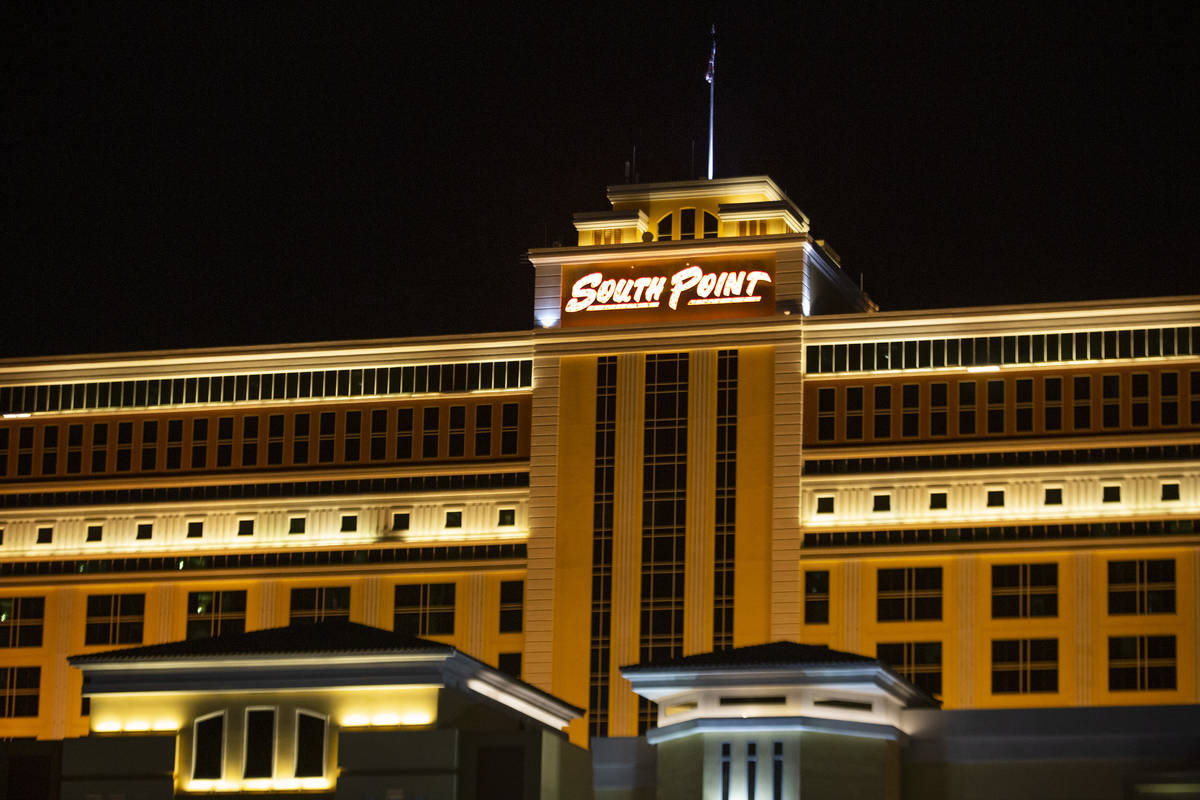 Gas cost an average of 30 cents per gallon, Lyndon B. Johnson was president, and Clark County’s population was about 211,000 (about 100,000 people fewer than Henderson nowadays) when Michael Gaughan first became an owner of the El Cortez in 1965.

Few, if any, have held a gaming license in Nevada for longer than Gaughan. He’s built and owned some of the more recognizable properties in the Las Vegas Valley including the Barbary Coast (now The Cromwell), Gold Coast, Suncoast, The Orleans and South Point.

Born in Omaha, Nebraska, in 1943, Gaughan moved to Las Vegas in 1952 and later graduated from Bishop Gorman High School in 1961. He is the son of the late casino owner Jackie Gaughan, who owned the El Cortez and ownership stakes in many other properties.

Michael Gaughan merged his Coast Casinos company with Boyd Gaming Corp. in 2004, before splitting off from the company in 2006.

Gaughan, 78, now owns South Point and the Las Vegas Airport Slot Concession. He has 2,300 employees working at the property, nearly all of whom he brought back after the COVID-19 shutdown last March, he said. Gaughan expects to bring back another 120 or so employees when he opens up the property’s showroom, box office and convention space.

He sat down late last month with the Las Vegas Review-Journal to discuss the COVID-19 pandemic, his casino, his philosophies and how the business has changed over the years. The interview has been edited for length and clarity.

The South Point is known for its arena and equestrian events center. How has your business managed without these events and other convention and meeting business during the pandemic?

There’ve been none. To get into my arena, the people on horseback do not have to wear a mask. The arena has about 4,600 seats, but there could be no spectators. The other people in the seats are the participants and their families, and 95 percent of your horse events, they don’t draw people. I think on horse events, like three or four of the 43 were ticketed, so everything’s free. If you like horses, you can come out here and watch ’em for free. But I had to close down the public viewing, but they let me have horse shows. I just got that back last month.

Financially, how has that impacted your business?

Actually, right now I’m doing all right. There’s no tellin’ if it wasn’t for the pandemic, but the local places are doing quite well right now. What’s happening is a lot of places are saving money by not doing the food and they’ve cut back. You’re not spending as much money bringing people in, and so the margins have really increased. I’ve got the only buffet open in town. (Note: At least two other buffets at Las Vegas casinos are open in limited capacity, though South Point’s buffet appears to be the only one open every day.)

Why do you keep the buffet open, when other gaming operators have decided it’s just not worth it?

I don’t know no better? (chuckles) Because I think a little different. Remember, I’m not a corporation. I lasted two years with Boyd. When Boyd and Coast merged, I lasted about two years, and then I got out. This place started as the South Point under Coast, and it opened as a Boyd Gaming casino. Then I was the second-largest stockholder and I took this place back. They happily wanted to get rid of me, so I took this place back. That’s when the South Coast became the South Point. I don’t do well in the corporate world. I don’t know, I think differently. I delegate, I do not micromanage. If I run this place with an iron fist, they’d run over me around here.

What’s your philosophy for running a hotel?

What do you think they see?

Dollar signs. I really think that they want to kill the golden goose yesterday. A short term for a big corporation, big public corporation, is a quarter. Short term. Long term is a quarter plus one day.

Can you tell me a little bit more about getting into Boyd and then why you left?

Bill Boyd’s father, and my father were partners — Sam. And Bill and I are still very close friends. I was running five places at the time, and with different philosophies. I was making more money. But I think that ever since Bill kind of retired, Boyd has become more corporate. I just wasn’t happy, I will say.

Why did you choose to buy one hotel and kind of focus all of your efforts on that one hotel?

The thing is, they wanted me out. They wanted to know which hotel did I want. They wanted to give me the Gold Coast. I wanted The Orleans. This place had just opened and I knew the potential of this place well, but it had just started, right? And I took this place. I didn’t want to do what they wanted to do. And not that they were wrong and I was right, we just — kind of death by 1,000 cuts. I got tired.

Do you ever have any intention of selling South Point?

I got nowhere to go. A guy come in here and offered me a giant offer about two weeks ago — big offer, probably worth more than the place is worth. I turned him down and it’s not, “Well, let me look at and study it.” I just said, “No. It’s not the money; I got nowhere to go.” I enjoy working, and I’m very well-off financially. It’s like in the movie “Chinatown.” I can’t eat any better, drive any better cars. So I enjoy working, and I work about five days. Actually, I’m taking more time off than I used to take.

Do you have any interest in buying another property?

Right now? No. I’m very happy. When I had the four or five hotels, it was a lot of work. And this way, this is more fun. I’ll tell you what I miss. I miss my arena at The Orleans. I miss the Barbary Coast. I just miss it. The Barbary Coast was kind of a cute place. That was my first real hotel. That was a five-year battle building at that corner. When they built the Flamingo, Flamingo Road did not go over the highway. The first time I went to look at the Suncoast, I had to take a helicopter because there was no road up there at the time. And I got this land by accident because it got foreclosed on, out of a bankruptcy, and then the price was so cheap. I had no intention of building a place here. My general manager and (longtime friend and business partner) Tito (Tiberti), they convinced me to buy the land, it’s just a land investment. I knew how to do it, and a blind squirrel finds his nuts once in a while.

What do you make of that shift toward corporate consolidation of many casinos here?