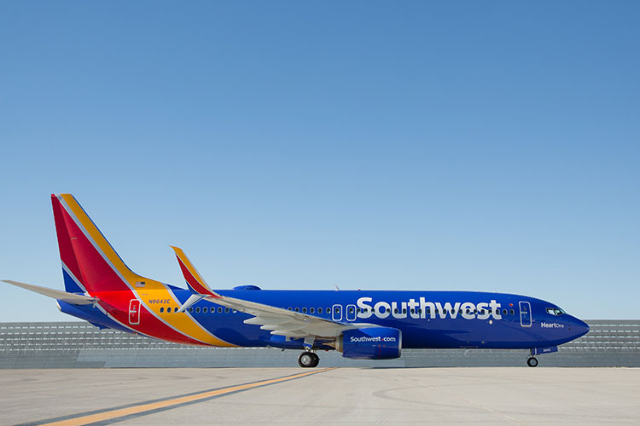 The busiest commercial air carrier at McCarran International Airport posted record net income of $584 million, 88 cents a share, on revenue of $5.32 billion for the quarter that ended Sept. 30.

That compares with net income of $324 million, 48 cents a share, on revenue of $4.8 billion in the same quarter a year earlier.

Revenue was up 10.8 percent over the previous year. It was the 10th consecutive profitable quarter for the Dallas-based airline.

Results beat the average estimate of 11 Wall Street analysts by 2 cents a share.

Airline executives only expect things to get better in the months ahead, projecting a 1 percent increase in revenue as a result of adding a series of new international routes that kicked off with five-gate terminal opening at Houston’s Hobby International Airport earlier this month.

The airline also welcomed a new revenue stream with an amended co-branded credit card agreement with Chase Bank USA in August. The company reported an additional $300 million as a result of the deal.

Expenses were trimmed with jet fuel prices down $300 million for the quarter. Based on current projections, Southwest will save $1.3 billion on fuel alone this year.

It also didn’t hurt that Southwest recorded the highest-ever load factor — the percentage of paying customers on planes — at 85.4 percent for the quarter.

Southwest currently flies 692 Boeing 737 jets after receiving three previously owned 737-700 planes during the quarter. It expects to have 700 aircraft by the end of the year with 2 percent year-over-year fleet growth anticipated in 2016.

The airline has said that it is evaluating future growth plans with a number of options, foreign and domestic. The company hasn’t spelled out any specific plans for the Las Vegas market.

Southwest continued to benefit from the emergence of its Dallas Love Field market where the company a year ago added dozens of new flights with the expiration of the Wright Amendment, including four daily nonstop round trips to and from Las Vegas.

Southwest reports that it has 215 daily flights to Las Vegas. McCarran reports the number to be 205, only because the airline and the airport count them differently. Southwest considers flights that operate six times a day to be daily; the airport counts the fractional totals.

By McCarran’s count, Southwest brings 30,802 seats into the market each day, a 41.3 percent market share.

Through August, the airline has flown 11.9 million passengers to and from Las Vegas in 2015, a 5.3 percent increase over the same period in 2014.