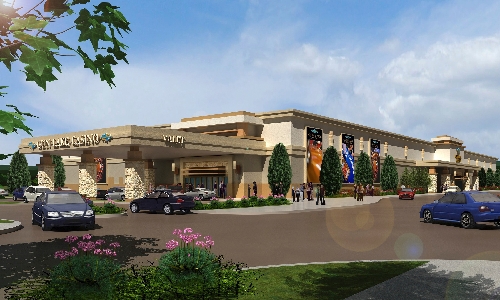 Native American gaming operations have not been without controversy, from lawsuits questioning property transfers by the federal government to community opposition to resorts being built off tribal land.

The lucrative development and management deals also give these companies a chance to entice more visitors to Las Vegas with customer-loyalty programs, an industry analyst said.

“In many cases these large casino operators are brought in to run and assist tribes in developing their casinos,” said Alan Meister, principal economist with Nathan Associates Inc. in Irvine, Calif.

Meister said when tribes first got into the gaming business they tended to seek out these large casino operators for their expertise and financing of projects.

“They gain the expertise they need, for the most part, with these seven-year management contracts,” he said. “Once these contracts expire, the tribes manage the properties themselves. It doesn’t mean they can’t be renewed.”

Caesars Entertainment was granted a five-year extension in December 2009 to manage the Harrah’s Ak-Chin hotel-casino south of Phoenix. Caesars has managed that property since it opened in 1984.

The company also manages tribal casinos in North Carolina and California. The revenues generated from these agreements were included in the $17.2 million in earnings listed in the company’s third-quarter report.

Station Casinos will manage a new $157 million American Indian casino in Wayland, Mich., scheduled to open on Feb. 11. The deal will replace a management agreement for Thunder Valley Casino in Placer County, Calif., that expired in June.

The deal has met its share of opposition. On Friday, a federal appeals court revived a lawsuit challenging the new casino.

In its ruling, the court said casino opponent David Patchak can challenge how the federal government placed the land in trust for the tribe.

“This decision did not address any of the merits of the case, which we believe are clearly in our favor and it does not have any impact on the opening of our gaming facility,” said D.K. Sprague, tribal chairman of the Gun Lake Tribe of Pottawatomi Indians.

“Station Casinos is a good fit because of our experience in the locals market,” Nielson said. “Most tribes are local operations. Our business model is very similar to most tribes’ business models.”

Station Casinos has partnered with the Federated Indians of the Graton Rancheria on a 2,000-slot machine facility in Rohnert Park near Sonoma in Northern California.

“No date or timeline for development has been set as we’re still in the pre-development phase of this project,” said spokeswoman Lori Nelson in an e-mail.

The company has development and management deals with the Mechoopda Indian Tribe of Chico Rancheria near Chico and the North Fork Rancheria of Mono Indians for a casino near Madera. Both locations are in California.

“We are in California for a couple of reasons,” Nelson said. “The population and the simple fact that you have a number of tribes … working on gaming projects.”

The gaming business has been very lucrative for Native American tribes.

For fiscal year 2009, there were 419 tribal casinos nationwide generating $26.48 billion in gaming revenues, according to the National Indian Gaming Commission in Washington, D.C.

A majority of those casinos, 169, earned between $25 million and $250 million. Figures compiled by the commission showed 71 casinos earned under $3 million, while 21 reported annual revenues of $250 million or more.

“We’ve had a lot of discussions with various tribes,” said Alan Feldman, senior vice president of public relations with MGM Resorts. “I don’t know where it will all lead. We have been exploring a variety of different possibilities with tribal interests.”

MGM Resorts has reached out to tribes in California in an effort to add to its customer data and marketing strength. The company is also exploring opportunities with tribes in the middle of the United States and the Pacific Northwest.