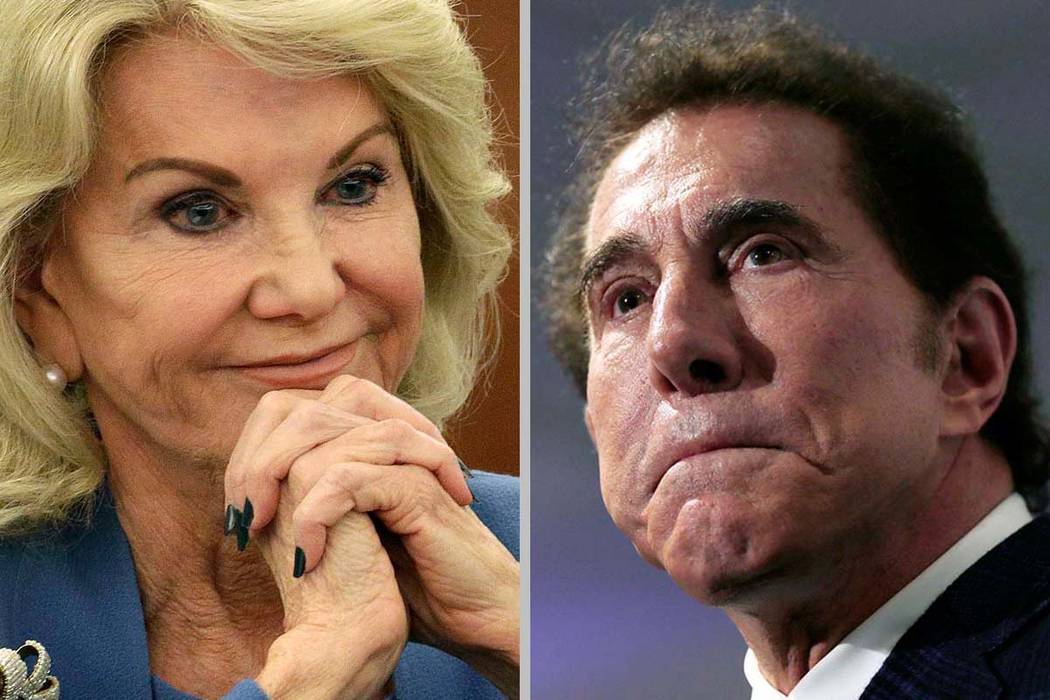 Las Vegas philanthropist Elaine Wynn says she never encouraged women alleged to have been harassed by her former husband, Steve Wynn, to contact the Wall Street Journal, which published a story that led to Steve Wynn’s downfall and separation from the company that bears his name.

Elaine Wynn, who co-founded Wynn Resorts and is the company’s largest shareholder, on Monday responded through a spokeswoman to accusations contained in an affidavit of Renee Palleggi.

The affidavit was dated July 2018 and presented as evidence in a motion filed Friday to dismiss an invasion of privacy and civil conspiracy lawsuit filed by former Wynn hair salon director Jorgen Nielsen against Wynn Resorts Ltd., its CEO, Matt Maddox, and two former Wynn employees.

Palleggi was a customer and personal friend of Nielsen but had a falling out with him in February 2018 when she said she believed Nielsen and Elaine Wynn were engineering a plan to smear Steve Wynn through sexual harassment allegations.

In an affidavit from Palleggi, the Arizona resident alleged that Nielsen suggested she say Steve Wynn raped her and that she bore his son and gave him the middle name “Wynn.” Palleggi rejected the idea.

Nielsen’s Las Vegas-based attorney, Kathleen England, called the allegations in Palleggi’s affidavit highly questionable and inaccurate and criticized Wynn Resorts for using it in the company’s motion to dismiss.

Nielsen provided his own sworn affidavit in the defamation case, which is on appeal before the Nevada Supreme Court.

“It’s appalling that they (Wynn Resorts) would use this incompetent, untested affidavit of a friend of Steve Wynn’s that we contend he (Steve Wynn) misused in the defamation suit to malign Mr. Nielsen,” England said Monday.

Steve Wynn has denied ever harassing anyone since the allegations were first made. Elaine Wynn has said she has not had contact with Journal reporters, and, through a spokeswoman, said she has not supplied phone numbers of alleged victims to the newspaper.

“Ms. Wynn never engaged with reporters from the Wall Street Journal,” Elaine Wynn spokeswoman Devon Spurgeon said in the statement issued Monday. “In fact, the WSJ reporters noted in a story dated Feb. 5, 2018, that ‘Ms. Wynn declined to speak to the Journal, which contacted more than 150 people who work or had worked for Mr. Wynn; none reached out to the Journal on their own.’”

Elaine Wynn is not a party to Nielsen’s lawsuit or the reply from the company.

The accusations resurfaced last week when Wynn Resorts gave its Friday response to Nielsen’s lawsuit, which was filed in Clark County District Court on Oct. 17. In addition to the corporation and Maddox, the Nielsen lawsuit named two former Wynn employees, general counsel Kim Sinatra and director of security James Stern, as defendants.

Company attorneys say the lawsuit has no basis for an invasion of privacy complaint.

But the Palleggi affidavit included a newly disclosed series of allegations against Nielsen and Elaine Wynn. The sworn testimony included screen shots of text exchanges.

In a text exchange between Palleggi and Nielsen on Dec. 20, 2017, Nielsen asks, “Did you by chance get a call from WSJ?” to which Palleggi replied, “No. Why?”

He responded, “Guess they are calling everyone regarding harassment at the Wynn and Bellagio …”

The relationship changed dramatically by Feb. 7, 2018, after the Journal article was published and Steve Wynn had stepped down as chairman and CEO of the company. At the time, Steve Wynn denied ever having assaulted anyone and blamed Elaine Wynn for orchestrating the scandal as a legal strategy to modify a company share agreement in a court battle stemming from the couple’s 2010 divorce.

Palleggi texted Nielsen, “Don’t ever text me again.” Nielsen responded Feb. 24, 2018, with an image showing all of Palleggi’s personal information and a message that said, “Don’t f—- with me. FBI is on to you, time to move again.” A day later, she replied, “You are hearby notified that a police report is being filed. I demand at this point you cease harassing me.”

In her affidavit, Palleggi also said she believed disclosing information to the Journal was planned to coincide with Steve Wynn’s birthday as retribution because Steve Wynn married his new wife, Andrea, around the time of Steve and Elaine Wynn’s wedding anniversary date.

Exhibits from the Palleggi affidavit also included a note she sent to the Wall Street Journal after the article appeared.

“I am shocked and saddened to see that you have taken part of this slanderous scheme against Steve Wynn. This was a planned false scandal set up and carried out by Elaine Wynn and Jorgen Nielsen,” she wrote. “I have the proof of this. Documented proof of their and your involvement, long before this article came out. I am going to bring this proof to my ‘Uncle’ Steve this weekend. I hope and pray he will bring about a swift justice to all involved. We all remember what happened to Joe Francis.”

Francis is an American film producer who was sued for defamation by Steve Wynn, who won a $7.5 million judgment against him in February 2012.

In her affidavit, Palleggi also alleges that Nielsen tried to convince her to say Steve Wynn had raped her, but she was convinced the allegations against Steve Wynn were untrue.

“I informed Jorgen that the accusations simply could not be true. I have known Steve for many years and never witnessed any inappropriate behavior by him. If anything, I observed women aggressively coming on to and being inappropriate around Steve.

“Jorgen told me that I should say that Steve raped me and that I gave birth to my son as a result. He said something to the effect of ‘she can make it well worth your while.’ I understood Jorgen to be referring to Elaine Wynn. Jorgen suggested that Elaine would be willing to pay me a six-figure amount if I would say that Steve raped me. He said there was a ‘huge’ amount of money at stake and that I needed to be on the ‘winning team’ and not the ‘wynning team.’ I refused to be a pawn in his and Elaine’s awful scheme.

“To be clear, Steve never raped me. Steve is not my son’s father. Steve has only been a gentleman around me. For this reason and due to the brilliant man I think Steve is, I gave my son the middle name ‘Wynn.’ My son, certain of my friends and family, and I are so fond of Steve that we call him ‘Uncle’ Steve.”