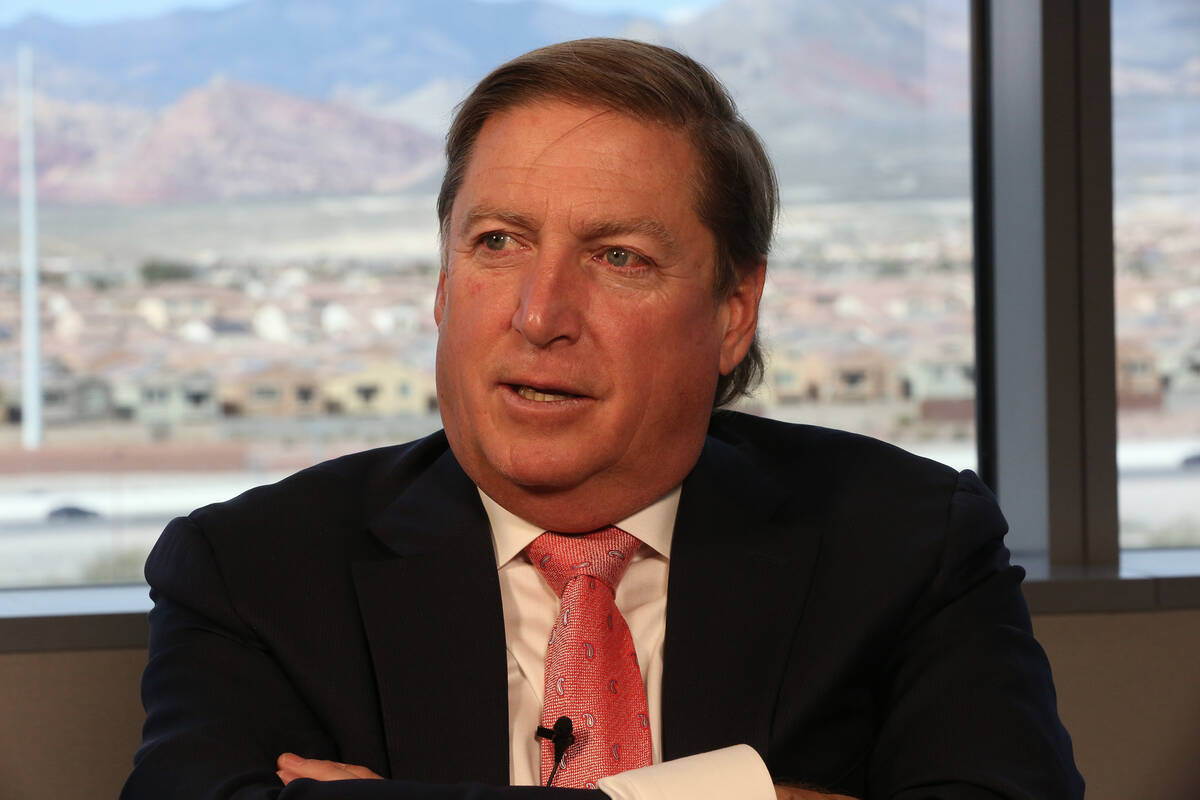 Dan Lee, CEO of Full House Resorts, discusses investments the company has made in casinos outside of Nevada at the company’s offices in Summerlin on Thursday, February 22, 2018. (Michael Quine/Las Vegas Review-Journal) @Vegas88s

Full House Resorts Inc. may have a full plate in the months ahead.

Lee, president and CEO of Full House, told investors Monday that the 40.3 percent decline in net income was a result of additional interest expenses related to the funding of construction of its new Chamonix property in Cripple Creek, Colorado.

Chamonix is one of three projects in the Full House development pipeline and Lee spent most of a call with investors talking about the potential of the projects that could more than double the size of the company.

Lee also said revenue generated in the quarter, while 12.4 percent better than last year, could have been higher had it not been for Hurricane Ida affecting the operations of the Silver Slipper in Bay St. Louis, Mississippi, and nearby forest fires affecting business at the Nevada casino it manages at the Grand Lodge Casino, a Hyatt property at Incline Village.

Lee said that although the Silver Slipper was only closed a few days while the storm blew through the area, many regular customers lost power and stayed away once the casino reopened.

At Lake Tahoe, the Incline Village property was never in any danger from the fire, but smoke “as thick as fog in San Francisco on a June day” kept customers away during the normally busy Labor Day weekend, Lee said.

Lee also talked about the new from-the-ground-up casino under construction in Cripple Creek, near the Colorado Springs area.

He said the company is currently spending about $1 million a week in construction on Chamonix, a 300-room property next door to its existing Bronco Billy’s casino. The company said the property would have the first luxury guest rooms in the market.

Laborers have been working on utility relocation and the installation of foundation footings and walls. Lee said the project would go vertical after steel arrives on-site in the next three weeks. One tower is expected to top out in April and another in August.

Lee said the company would seek waivers from city officials requiring the property be completed by Dec. 31, 2022, because he expects it won’t hit that construction deadline and more likely would open in early 2023.

The existing Bronco Billy’s, Lee said, is at a competitive disadvantage during the project because free parking designated for the property is being used for Chamonix construction. While revenue at Bronco Billy’s was flat, the Cripple Creek market has climbed around 16 percent, thanks in part to the elimination of casino game limits.

Full House is one of two finalists for a project in Waukegan, Illinois, a city about halfway between Chicago and Milwaukee. The company is expected to have an answer by January on a proposal submitted for review to the Illinois Gaming Board.

Because of its location, the Waukegan project has been cited as a possible competitor for a downtown Chicago casino.

Full House could get an answer as soon as Nov. 17 on a third development plan in Terre Haute, Indiana. Lee said his company is among four prospective developers that will make presentations to the Indiana Gaming Commission on that date. The commission has indicated it would deliberate and make a decision on the development later that day.

The Full House proposal, called American Place, would include a 100-room hotel with a rooftop pool and restaurant elevated above an interior greenscape. “The hotel appears to float above a fountain that surrounds its base,” a company release notes about the design.

Lee said that if the company were selected for the Waukegan and Terre Haute projects, it would have the available financing to complete them as well as the Chamonix project.

Full House shares, traded on the Nasdaq exchange, didn’t move from its $10.48 opening price in average volume trading Monday. After hours, the value increased 27 cents, 2.6 percent, to $10.75 a share.