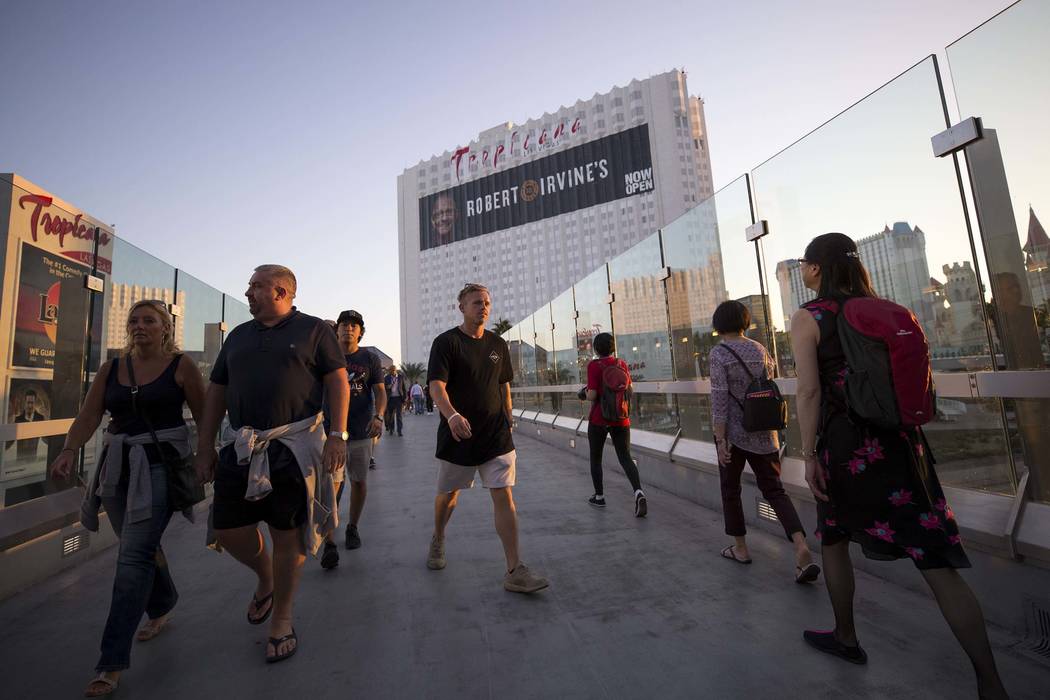 People walk over a pedestrian bridge linking the MGM Grand and the Tropicana near the intersection of Las Vegas Boulevard and Tropicana Avenue in Las Vegas, Thursday, Oct. 12, 2017. (Richard Brian/Las Vegas Review-Journal) @vegasphotograph

The operator of the hotel closest to the Route 91 Harvest Festival grounds not operated by MGM Resorts International said the Tropicana Las Vegas experienced a 35 percent increase in its cancellation rate on bookings in the days immediately following the Oct. 1 mass shooting.

But Jay Snowden, president and chief operating officer of Penn National Gaming, said there were no group cancellations and that the downturn in bookings appears to be a short-term situation that is gradually going away.

Snowden and CEO Tim Wilmott made remarks about the shooting in a scheduled quarterly earnings conference call Thursday.

While the incident technically occurred in Penn’s fourth quarter, the company is one of the industry’s best in providing investors with guidance on matters that could affect earnings.

“Of the 35 percent increase in cancellations year over year (at the Tropicana), 80 percent of those were isolated to October and November,” Snowden said in response to an analyst’s question.

“If you add in December, it goes to 90 percent,” he said. “At this point, it appears there will be very little impact going into 2018, but it’s still the first month post-event. It’s hard to say exactly how it’s going to play out.”

Penn was the first gaming company to publicly quantify the extent of cancellations in relation to the shooting. MGM Resorts reports quarterly earnings on Nov. 8, but it’s unclear whether the company will address cancellations.

Snowden said it was leisure visitors that made the most cancellations.

“The cancellations were largely in the leisure-online travel agency segment,” Snowden said. “In our group business, we didn’t have any cancellations and our casino block has held out very well. It’s really that leisure business that decided to cancel in the fourth quarter. We’ll see how it plays out in Q1.”

Snowden noted the shooting was the first of two incidents that could affect Penn’s bottom line when it reports fourth-quarter earnings in February. He said the company’s Mississippi properties were affected by Hurricane Nate which closed casinos on what had been scheduled to be a major event weekend Oct. 7-8.

Prior to discussing company finances in the conference call, Willmott applauded employees at the Tropicana for their response to the tragedy.

“I want to acknowledge the efforts of our Tropicana Las Vegas employees,” Wilmott began. “At the beginning of the month, as we all know, we had that horrific incident in Las Vegas that occurred right next to the Tropicana and we had hundreds and hundreds of concert-goers come into our facility seeking shelter.

“Our team there never trained for this, but they reacted heroically and were able to bring comfort, compassion, shelter, help the wounded get to health-care facilities, provide blankets, sheets, pillows to a large number of people who stayed overnight in our ballroom,” he said.

“They executed on what they never could have expected to train for. They were the real heroes of our company that night. I wanted to say thank you again for a job well done.”