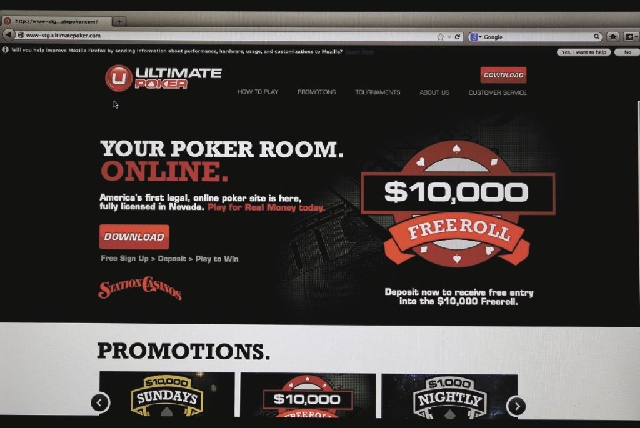 The home page for Ultimate Poker by the company Ultimate Gaming is seen on a computer screen at the company's headquarters, Monday, April 29, 2013, in Las Vegas.

In an email, Gaming Control Board Chairman A.G. Burnett said gaming agents are working with officials from Ultimate, which is majority owned by Station Casinos.

Over the weekend, Ultimate Gaming, parent of Ultimate Poker, said in a statement through a spokesman that on Thurday , it “discontinued” using services from Iovation. The company according to poker news resources, was linked to a 2008 online cheating scandal that brought down Ultimate Bet, which is not related to Ultimate Poker.

“This is in the category of where the ultimate responsibility rests upon the licensee (Ultimate Gaming), and I know that they are addressing the issue,” Burnett said. “We, in turn, will analyze what we received back from Ultimate, and then decide how to proceed from here.”

The issue was first brought to light by players on several online gaming websites and chat rooms. Software provided by Iovation, according to PokerNewsDaily.com and QuadJacks.com, was used by insiders of now defunct Ultimate Bet to “look in” hole cards of other players.

According to the websites, poker players saw Iovation linked to the Ultimate Poker website and warned other players via message boards.

Ultimate Poker launched in Nevada on April 30. The website can only accept wagers from customers gambling on computers or mobile devices located in Nevada.