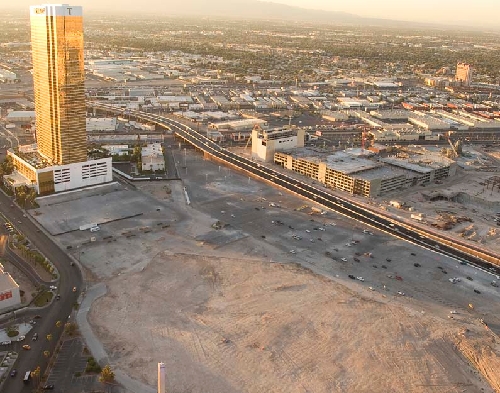 The empty land on the Strip that once was the site of the New Frontier will remain empty.

The Israeli company that bought the 36-acre site in May 2007 for more than $1.24 billion said Monday that it wrote off $500 million of the investment, according to a report in an Israeli financial media outlet.

Elad Group planned to build a $5.7 billion version of New York’s famous Plaza Hotel on the site, across from Wynn Las Vegas and adjacent to the Trump International.

But the real estate market has seemingly ended those plans.

"It can be clearly said that the Plaza project will not go ahead," IBI Investment House analyst Shay Lipman told Globes, an Israel-based publication. "Obviously, it is now the problem of the banks, which are left with land, and with borrowers, who we would be not surprised to see give back the land when the loans come up for renewal in six months."

Elad acquired the site from New Frontier owner Phil Ruffin at the height of the real estate market for the equivalent of a little more than $34 million an acre in what was considered one of the Strip’s most expensive real estate deals ever.

At the time of the sale, Ruffin, who paid $167 million for the New Frontier in 1998, was seeking an equity partner to help redevelop the resort.

Elad closed the New Frontier in July 2007 and demolished the casino in November 2007.

But the company, which also owns New York’s Plaza Hotel, never followed through on its building plans.

According to the Israeli media report, the land is now valued at a little more than half of what Elad paid.

Elad officials said "developments in international capital markets" made it "impossible" for the company to obtain financing.

Billionaire real estate developer Donald Trump had viewed Elad’s plans as complementary to his Trump International, which was conceived as a nongaming 1,282-unit hotel and condominium tower, though lack of condo sales left it as a luxury hotel only.

Wynn, who offered to landscape the empty site at his own expense several years ago, said he had been approached to develop it. He declined, blaming the federal government’s "insatiable appetite for money" as a reason not to build a new Strip hotel-casino.

"(The land) is owned by two Israeli gents, that are friends of mine, that bought it at a very high price and are sort of in a difficult position now," Wynn said in response to an analyst’s question. "They even owe money against that property."

Wynn said he had been approached "on a monthly basis" to build something that could be connected to Wynn Las Vegas and Encore. He said the Elad Group partners are willing to turn the property over to Wynn Resorts and would pay management, design and supervisory fees.

"’Help us get out of this,’ " said Wynn on the conference call, relaying the Elad Group comments.

However, Wynn said he declined the offer because he can’t determine the project’s return on investment.

Ruffin used a portion of the proceeds from the New Frontier sale to acquire Treasure Island from MGM Resorts International for $775 million in March 2009.