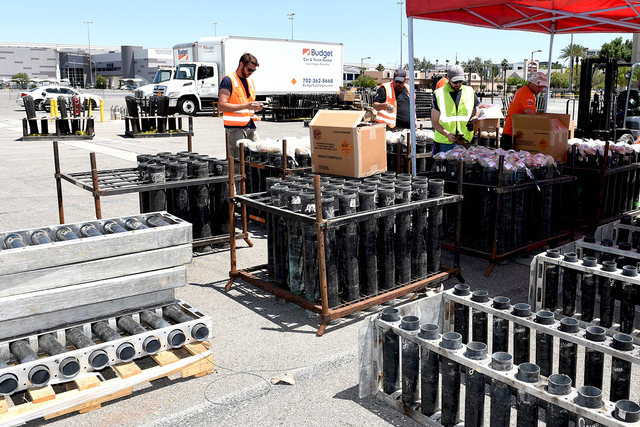 Grucci Fireworks team setting-up for the fireworks show accompanying the implosion of the Riviera hotel Tuesday morning, June 14, 2016 at 2 am to make room for the expansion of the Las Vegas Convention Center (seen in the background). Sunday, June 12, 2016. (Glenn Pinkerton/Las Vegas News Bureau) 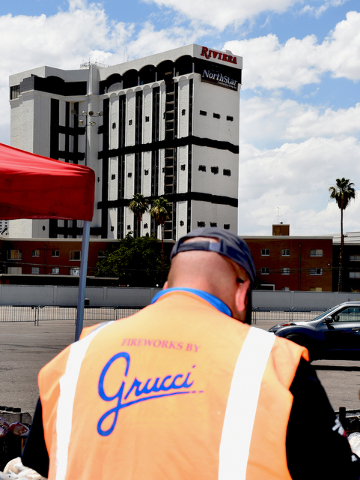 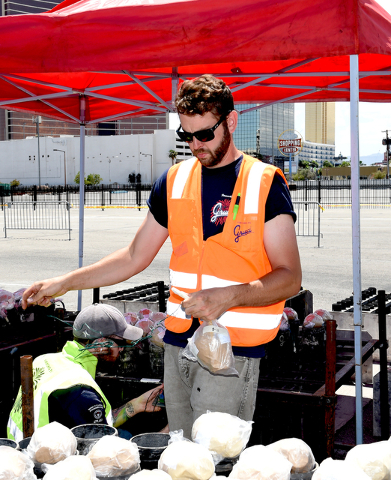 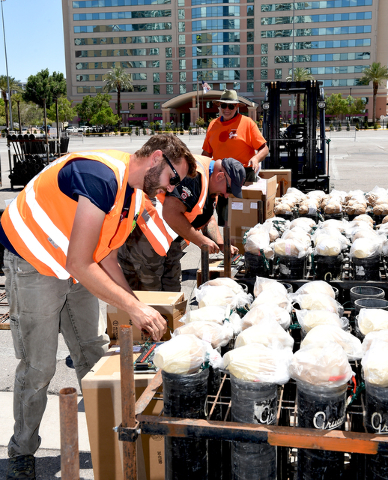 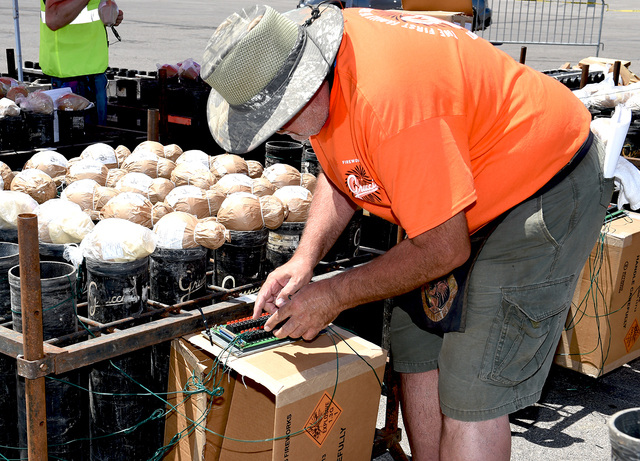 Grucci Fireworks team double-checking the wiring for a bank of aerial fireworks for the show accompanying the implosion of the Riviera hotel Tuesday morning, June 14, 2016 at 2 am. Sunday, June 12, 2016. (Glenn Pinkerton/Las Vegas News Bureau) 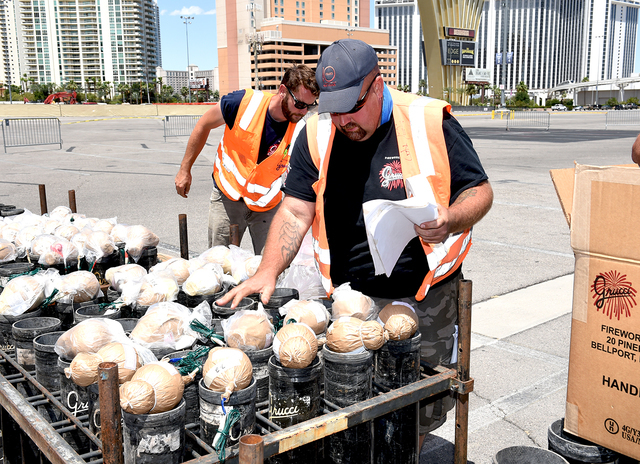 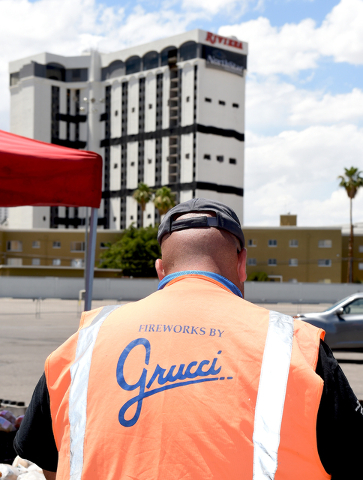 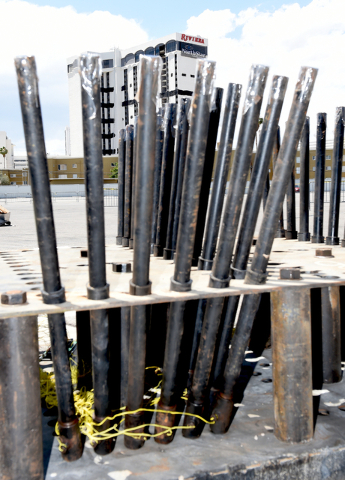 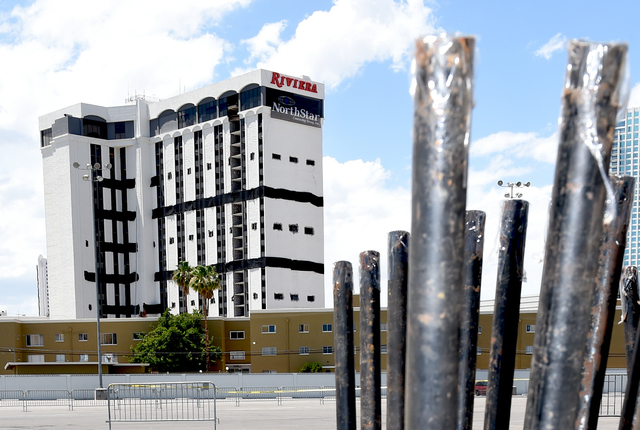 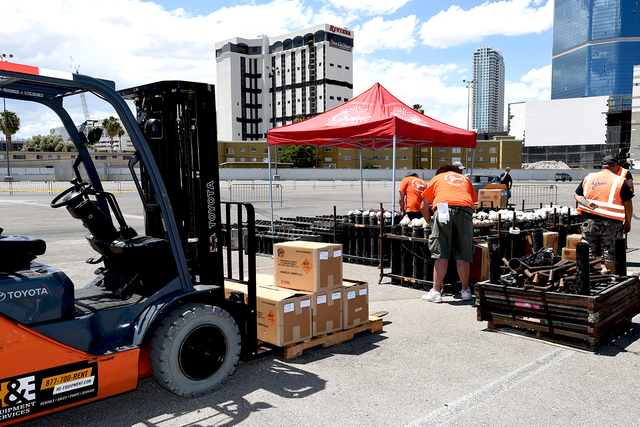 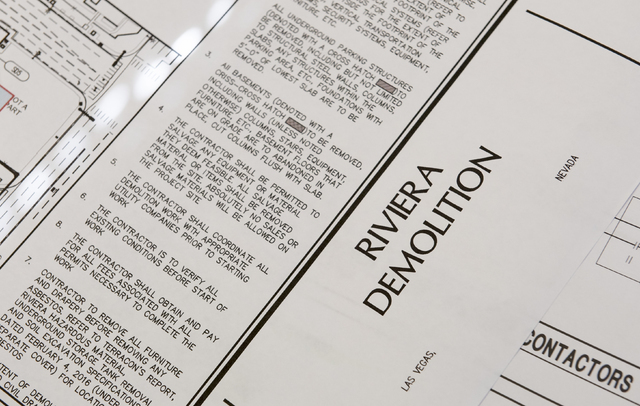 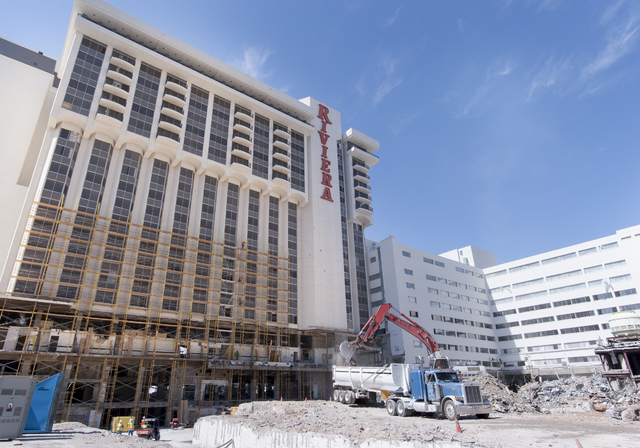 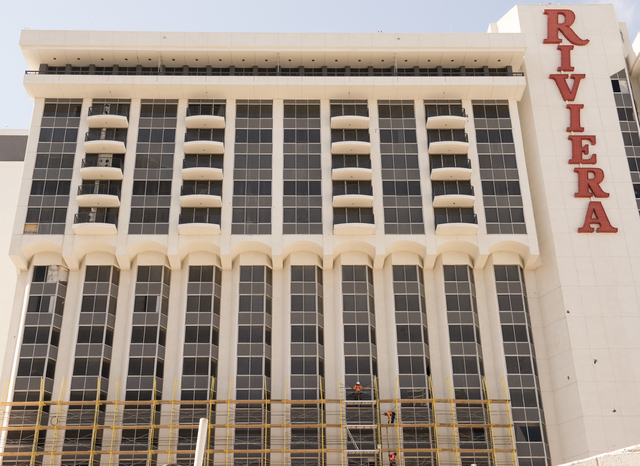 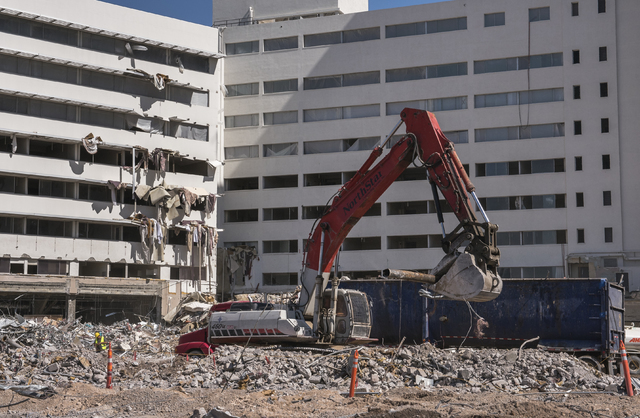 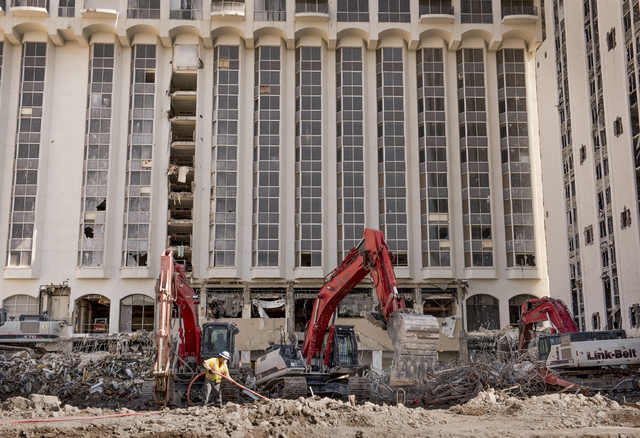 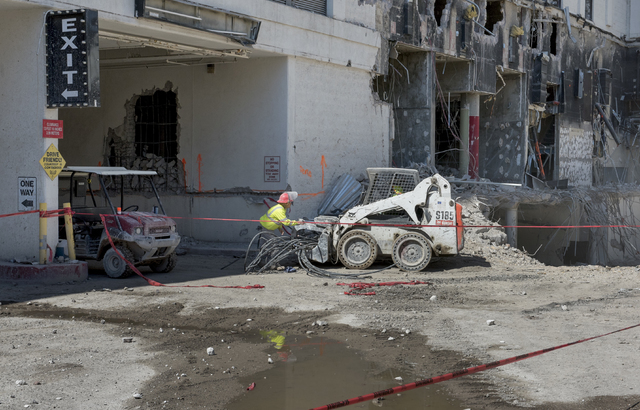 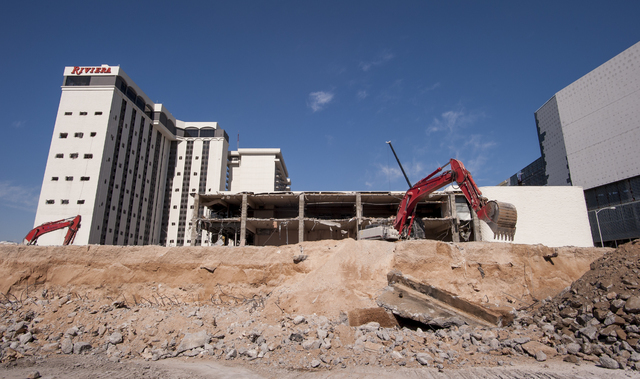 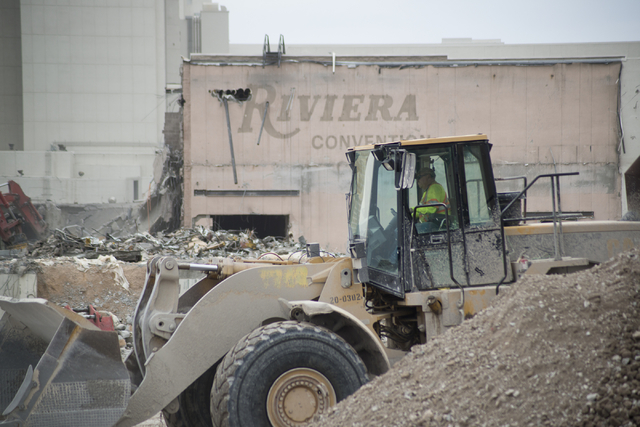 A worker drives a construction vehicle as crews work to demolish parts of the Riviera hotel-casino in Las Vegas on Friday, May 20, 2016. The two main towers are scheduled to be imploded in June and August. Daniel Clark/Las Vegas Review-Journal Follow @DanJClarkPhoto

Locals and visitors hoping to witness Tuesday morning’s implosion of the 24-story Monaco tower of the shuttered Riviera will be on their own to find the best vantage point.

The Las Vegas Convention and Visitors Authority said the demolition, scheduled for 2:30 a.m., isn’t considered a public event and there will be no special accommodations for watching.

Officials with W.A. Richardson Builders LLC, the demolition contractor, will make the final decision on proceeding with the implosion based on weather conditions.

But right now, it’s looking like a perfect night for an implosion.

The National Weather Service is forecasting light winds in the afternoon and winds of less than 10 mph overnight. Officials with W.A. Richardson would not disclose the threshold or conditions necessary to delay the event and it’s expected to proceed as scheduled.

If wind or other circumstances become a factor, a decision to delay would have to occur by 4 a.m., after which the demolition would be rescheduled.

Some street closures are expected in the vicinity of the site prior to demolition, with Las Vegas and Riviera boulevards and Convention Center Drive to be affected. Clark County officials said Riviera Boulevard would be closed between 1:30 and 5 a.m. and Convention Center Drive would be reduced to one lane for eastbound traffic only from 1:30 “until the dust settles,” which is estimated to be at about 2:45.

LVCVA officials say there is no health risk from the dust that will fly from the implosion.

PLANNING FOR THE BEST VIEW

The lack of a public event hasn’t stopped some nearby businesses from planning their own implosion viewing parties.

The Royal Resort, 99 Convention Center Drive, just south of the Riviera and its Barrymore lounge offers a direct view of the dormant hotel and are planning an after-hours implosion viewing party. Barrymore officials say they’re sold out and will only take walk-ins for no-shows.

A representative of the Barrymore said the lounge would be open between midnight and 3 a.m.

A manager at the Peppermill Restaurant and Fireside Lounge said it would be business as usual at the 24-hour Strip locale Tuesday morning.

Martha Montague said there are booths in the restaurant and lounge with views of the Riviera, but there are no special plans for gatherings to observe the demolition. As usual, guests will be seated on a first-come, first-served basis — and guests must order something once they’re seated.

Tuesday morning’s implosion will be the first of two involving the Riviera, which the LVCVA acquired for $190 million in February 2015 to expand its convention facilities. In that month, the LVCVA board of directors unanimously voted to spend $182.5 million for the hotel and its surrounding amenities and $8.5 million to cover related acquisition costs.

The LVCVA also had to address the threat of a petition seeking approval of an ordinance to block the demolition.

Board members in May unanimously approved an economic impact analysis that says it would cost Southern Nevada $15.8 billion in economic output if the demolition were to be blocked.

An initiative petition filed by Henderson resident Kelden Engel seeking approval of an ordinance that would “legally prevent the demolition of any structures that are currently or have ever been situated on land denoted by Clark County Assessor’s Parcel Number 162-09-703-001.”

That legal description is the land that houses the Riviera. Much of the low-rise buildings on the site already have been demolished.

An LVCVA spokesman said last week the authority has received no further contact about the petition effort.

It took several months to determine how the 60-year-old Riviera would be brought down after specialists were brought in to determine the level of asbestos in the building materials. Cordell Corp. was hired as the LVCVA’s project manager and Terracon Consultants was contracted to investigate potential hazardous materials.

Hazardous materials within the Monaco tower were removed and before the Monte Carlo tower can be brought down in August, workers will be required to chisel away the exterior finish, which has asbestos encased within it. Richardson workers will have to wrap the building in plastic and chisel away the finish and haul the debris away to prevent asbestos particles from becoming airborne during the planned implosion, which normally results in large dust clouds.

Once Cordell verified the demolition strategy, which included the two implosions and knocking other low-rise buildings and parking garages with conventional demolition methods, W.A. Richardson won the demolition bid for $42 million. That contract includes both implosions and the removal of rubble by the end of the year so that the grounds are clear for outdoor exhibits for the ConExpo-Con/Agg trade show in March.

The two towers are being imploded for almost as much money as it cost to build them.

Authority staff and board members view the dual implosions as an opportunity to call attention to the Las Vegas Convention Center expansion plan, which the LVCVA says will cost $1.4 billion. That doesn’t count $250 million the agency budgeted for acquiring the Riviera and future construction on the Riviera site that hasn’t been detailed. Previously, the LVCVA priced the whole package at $2.3 billion.

The Riviera grounds are adjacent to the Convention Center’s Gold Lot and will give the authority an extra 3,100 parking spaces that could either be used for additional vehicle parking or for outdoor exhibits.

The implosion of worn-out hotel-casino properties has become a cultural phenomenon for Las Vegas with more than a dozen places taken down in a flurry of explosions, collapsing towers, billowing smoke and dust and then deadly silence — except for the cheers from onlookers — all in less than a minute.