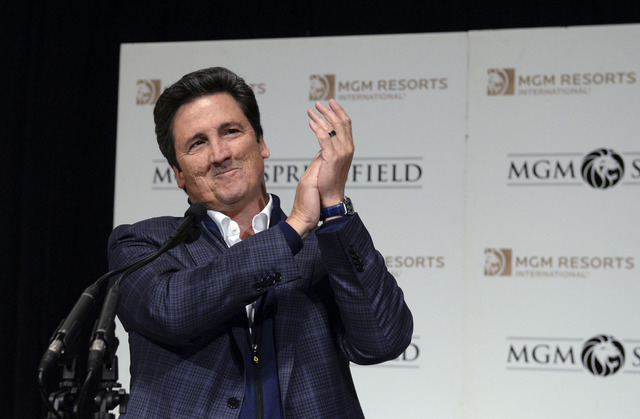 Bill Hornbuckle, MGM Resorts International president, speaks Tuesday, Nov. 4, 2014, to supporters gathered at the Basketball Hall of Fame in Springfield,Mass., following the election night defeat of a ballot question that sought to overturn the legalization of casino gambling in the state. The measure would have repealed a 2011 law authorizing development of a slots parlor and up to three resort casinos. One of the casinos is planned in Springfield. (AP Photo/The Republican, Mark M. Murray) 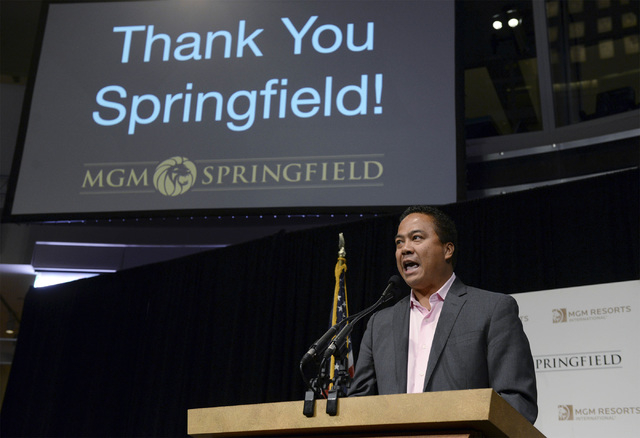 Mike Mathis, president and CEO of MGM Springfield, speaks Tuesday, Nov. 4, 2014, to supporters gathered at the Basketball Hall of Fame in Springfield,Mass., following the election night defeat of a ballot question that sought to overturn the legalization of casino gambling in the state. The measure would have repealed a 2011 law authorizing development of a slots parlor and up to three resort casinos. One of the casinos is planned in Springfield. (AP Photo/The Republican, Mark M. Murray)

Supporters of federal legalization of Internet gaming could be the biggest losers following the 2014 midterm elections, according to analysts.

The issue is not expected to gain traction in Washington, D.C., come January, after the new Congress is seated.

With Republicans taking control of the U.S. Senate and gaining a larger majority in the House of Representatives, various federal bills to legalize, tax and regulate aspects of Internet gaming have little chance of surfacing.

Senate Majority Leader Harry Reid, D-Las Vegas, will no longer hold the same title in January. Reid had been a supporter of legalizing online poker on a federal level.

“I think the Senate transition away from Reid is, on the surface, bad for Internet gaming,” Macquarie Securities gaming analyst Chad Beynon said Wednesday.

Beynon said the change in Congress, along with “disappointing” revenue reported in the past year from regulated online gaming activities in Nevada and New Jersey, have damaged legalization efforts.

“There’s little interest amongst the states at this point given lower budget deficits and power moving back to GOP,” Beynon said. “California is still the big domino, in our view, but it doesn’t appear that they’re any closer.”

Only two major gaming issues were approved by voters Tuesday. Massachusetts residents overwhelmingly rejected a repeal of the state’s casino law while South Dakota voters approved expanded gaming in the Old West town of Deadwood. Gaming expansion issues in Colorado and Rhode Island, and approval of a California Indian casino, were all defeated.

“Expansion of gaming is usually a tough proposition,” Beynon said.

Adelson opposes Internet gaming legalization. He invested millions to fund anti-Internet gaming coalitions and hire lobbyists to oversee a federal and state-by-state fight in opposition to the activity.

During a keynote address at the Global Gaming Expo in October, Adelson reiterate his position on moral and regulatory grounds.

Politico reported in September that Adelson gave $10 million to Crossroads GPS, which is run by Republican political operative Karl Rove and funded GOP Senate candidates. Many of those candidates won election on Tuesday.

“It’s not so much about Sheldon, it’s about the GOP,” said one gaming analyst who asked not to be named because his comments hadn’t been cleared by his investment house. “Based on history, the GOP rarely supports Internet gaming. The issue is on hold until 2017.”

Sources familiar with the process in Washington, D.C., said a bill introduced in March that would restore a ban on online gaming by reinstating portions of the Federal Wire Act, could be attached to another piece of legislation next year. Adelson backs the bill, that was introduced by Sen. Lindsey Graham, R-S.C., and Rep. Jacob Chaffetz, R-Utah.

In a statement, the Coalition to Stop Internet Gambling, which was created by Adelson, said Tuesday’s election bolstered the efforts to outlaw the activity.

A spokesman said 21 of the 22 members of Congress targeted by the pro-online gaming forces in the election were re-elected on Tuesday.

“The tactics to remove the dissenters of online gambling from office have failed,” the Coalition said in a statement. “Putting a stop to Internet gambling is a worthy cause, long supported by the coalition, many lawmakers, and the public.”

Alison Siciliano, spokeswoman for the for pro-Internet gaming Coalition for Consumer and Online Protection said the group hoped the new Congress wouldn’t try and prohibit the activity.