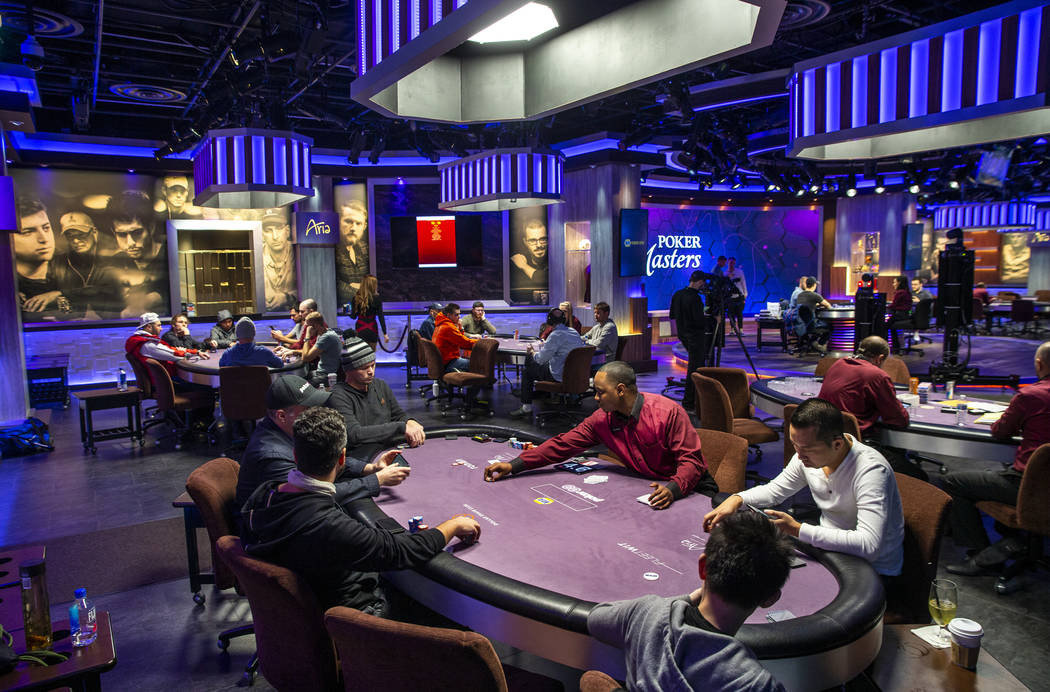 Play continues on sides as well as the main table during the Poker Masters 2019 broadcast in the PokerGO Studio at the Aria on Monday, Nov. 11, 2019, in Las Vegas. (L.E. Baskow/Las Vegas Review-Journal) @Left_Eye_Images 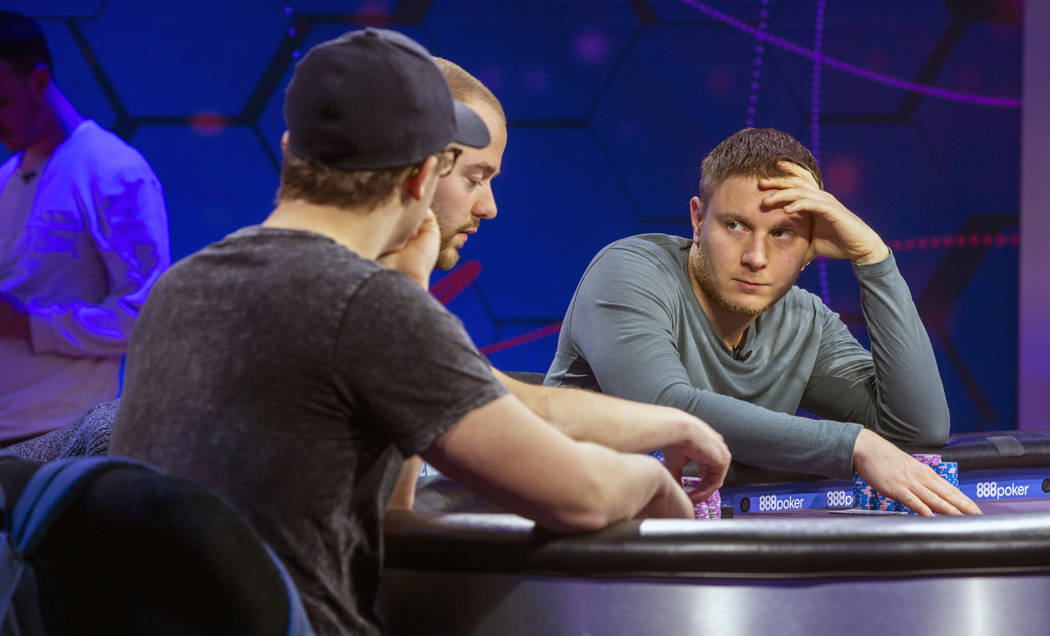 Kahle Burns, left, Sean Winter and Sam Soverel play on the main table during the 2019 Poker Masters broadcast in the PokerGO Studio at the Aria on Monday, Nov. 11, 2019, in Las Vegas. (L.E. Baskow/Las Vegas Review-Journal) @Left_Eye_Images 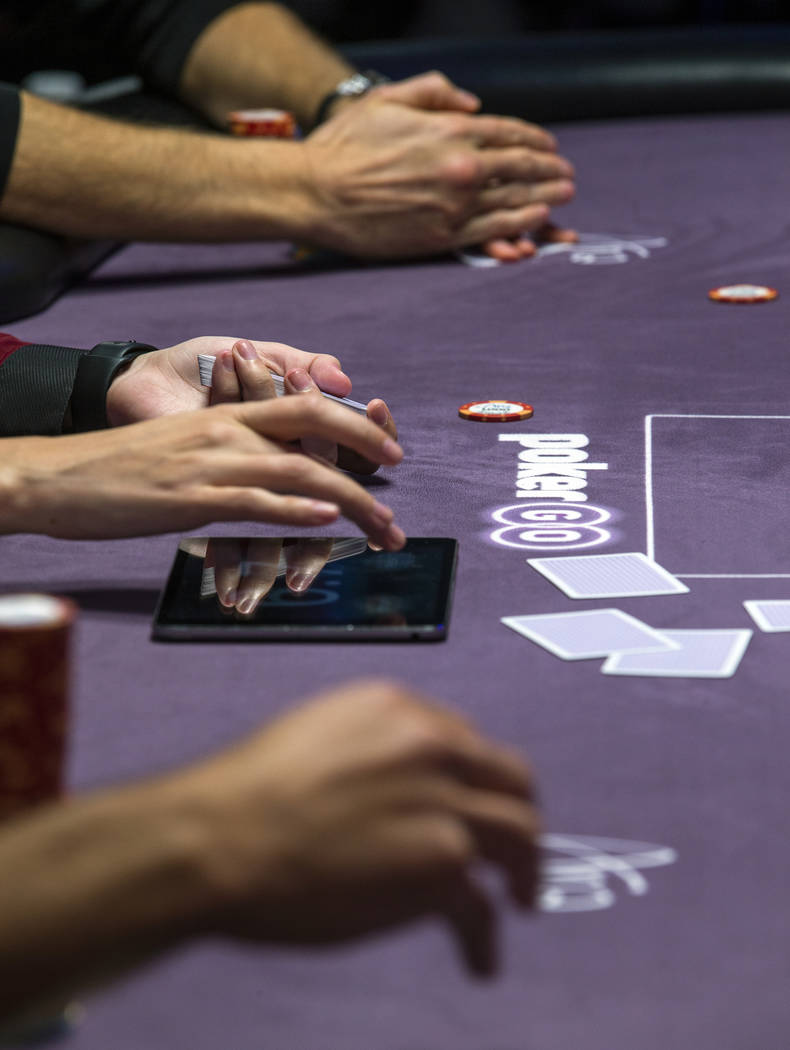 A dealer, center, keeps the playing time on a side table during the Poker Masters 2019 broadcast in the PokerGO Studio at the Aria on Monday, Nov. 11, 2019, in Las Vegas. (L.E. Baskow/Las Vegas Review-Journal) @Left_Eye_Images 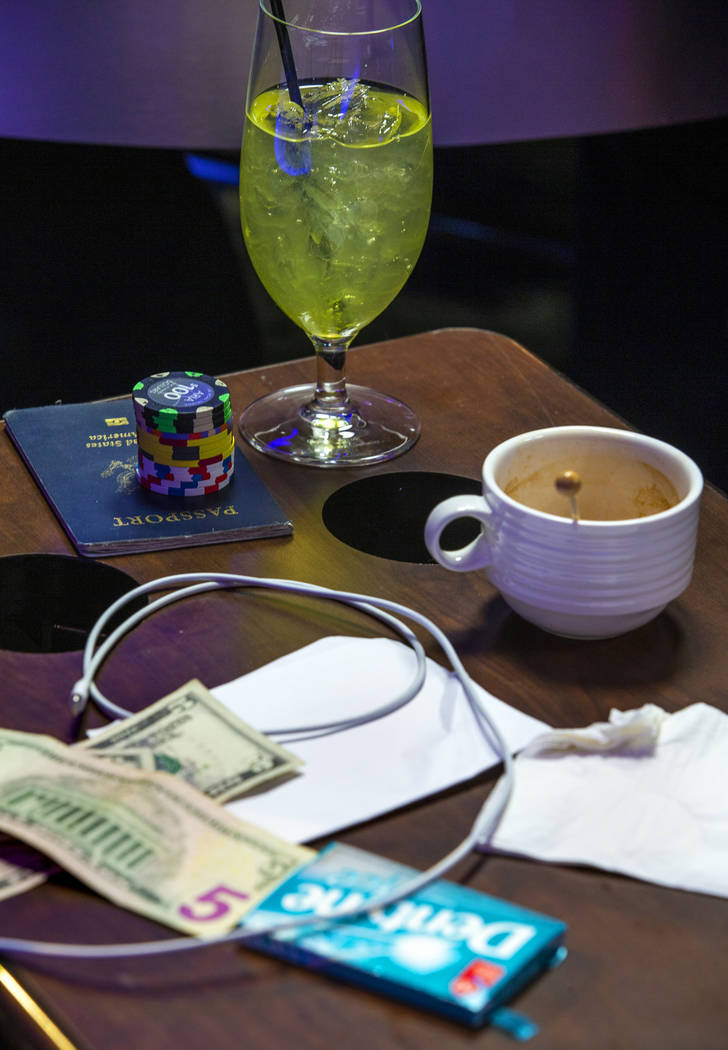 A collection of necessities from a poker player in the PokerGO Studio at the Aria on Monday, Nov. 11, 2019, in Las Vegas. (L.E. Baskow/Las Vegas Review-Journal) @Left_Eye_Images 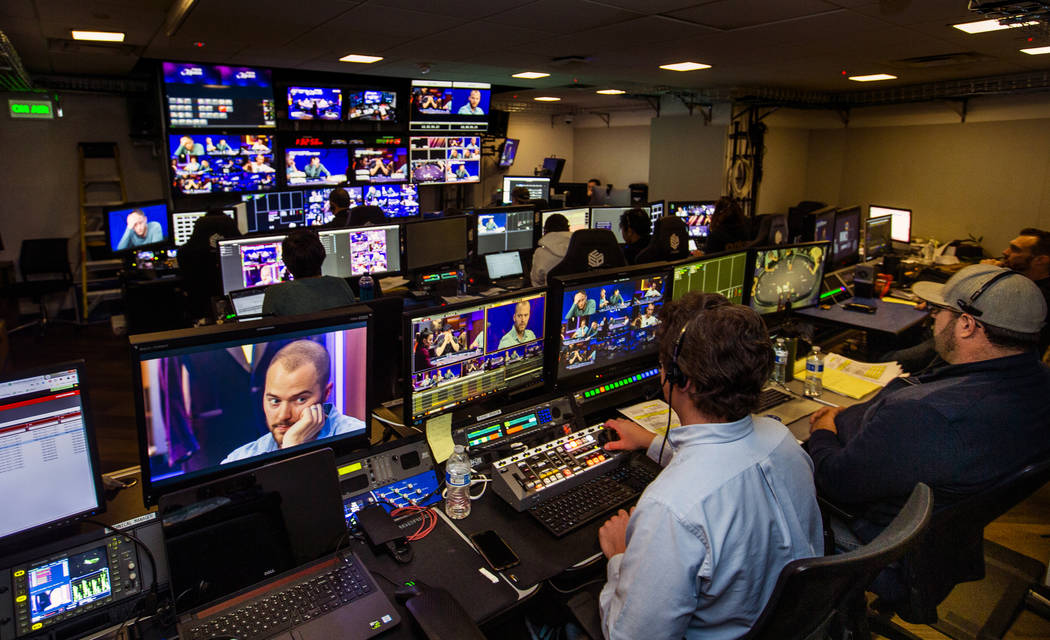 The control room is busy during the 2019 Poker Masters broadcast in the PokerGO Studio at the Aria on Monday, Nov. 11, 2019, in Las Vegas. (L.E. Baskow/Las Vegas Review-Journal) @Left_Eye_Images 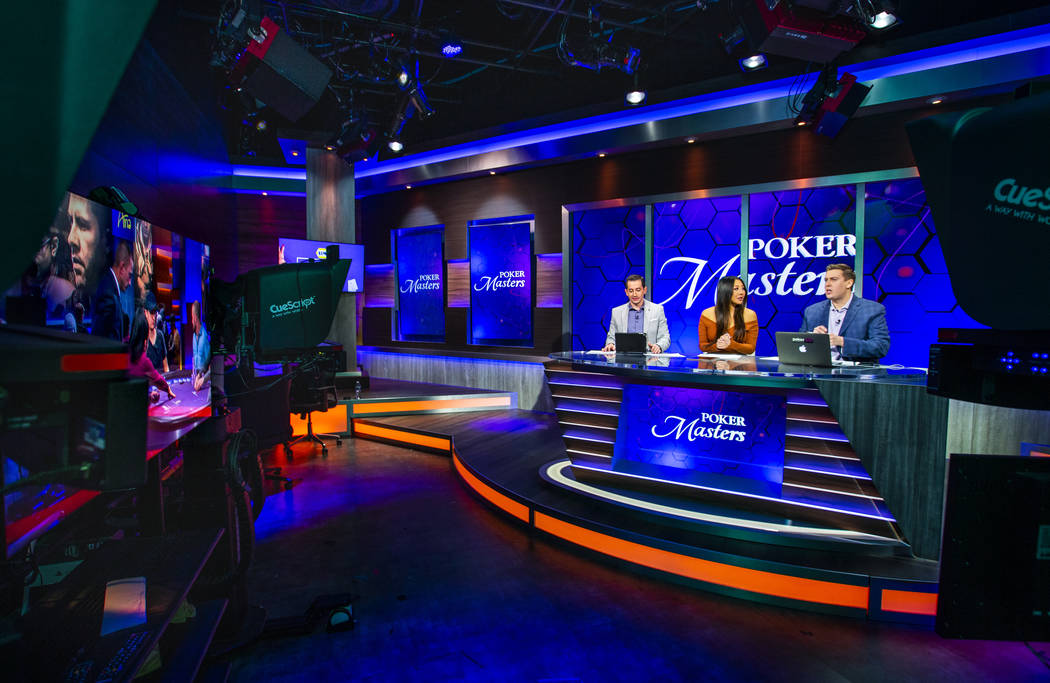 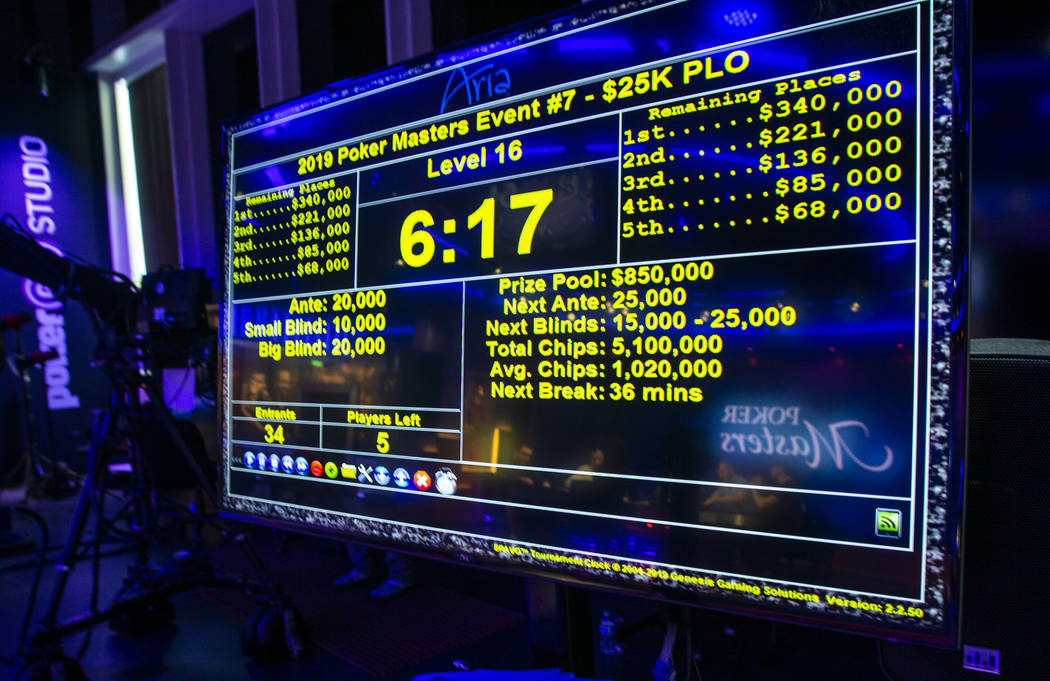 A current update on play is shown during the 2019 Poker Masters broadcast in the PokerGO Studio at the Aria on Monday, Nov. 11, 2019, in Las Vegas. (L.E. Baskow/Las Vegas Review-Journal) @Left_Eye_Images 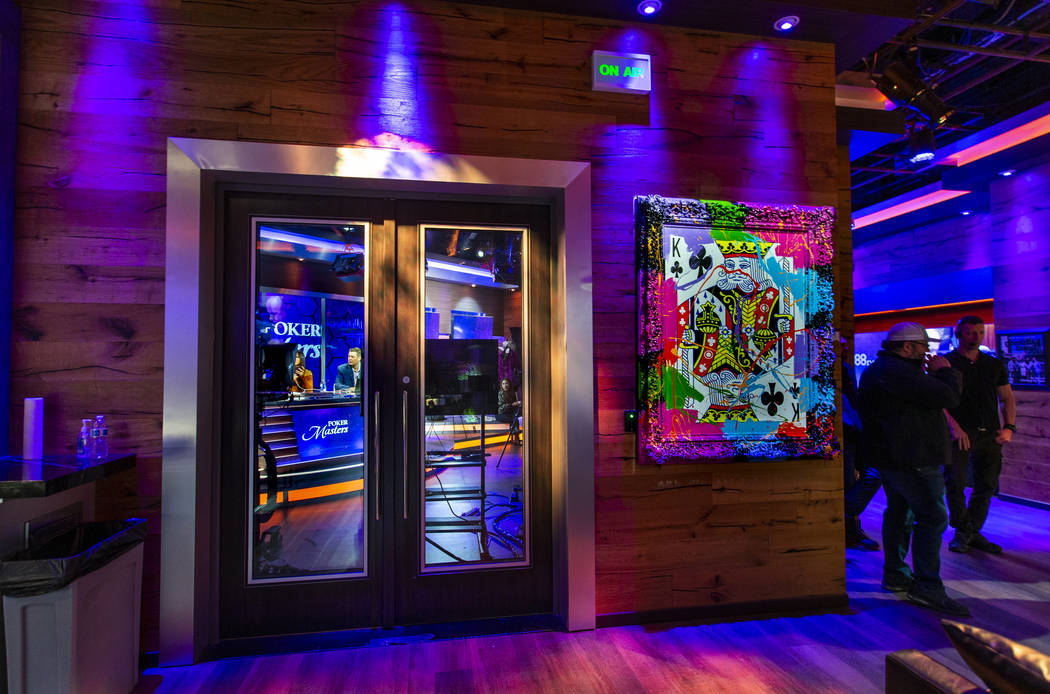 Attendees can watch the live studio broadcast and dine in a break room during the Poker Masters 2019 broadcast in the PokerGO Studio at the Aria on Monday, Nov. 11, 2019, in Las Vegas. (L.E. Baskow/Las Vegas Review-Journal) @Left_Eye_Images 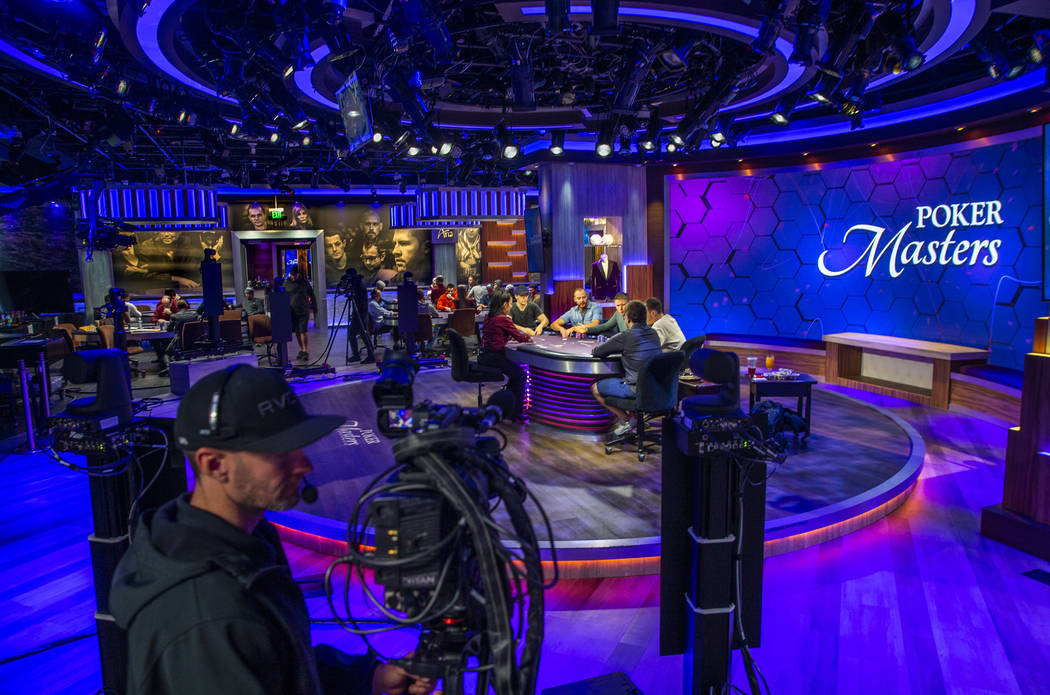 The main table during the 2019 Poker Masters is broadcast live in the PokerGO Studio at the Aria on Monday, Nov. 11, 2019, in Las Vegas. (L.E. Baskow/Las Vegas Review-Journal) @Left_Eye_Images 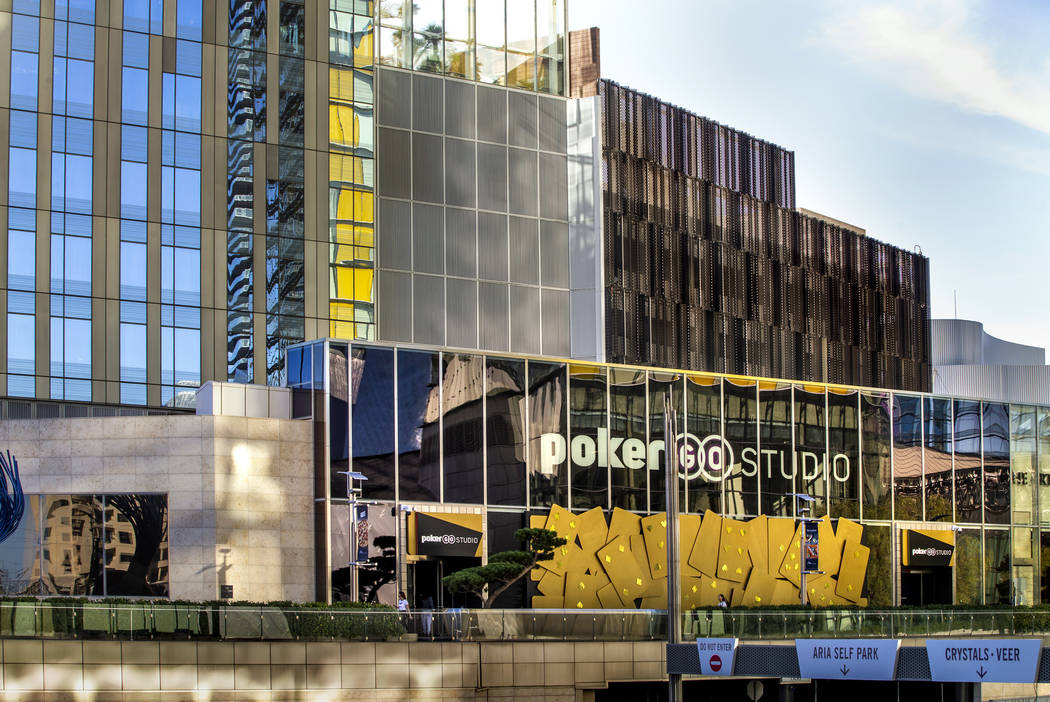 Exterior of the PokerGO Studio at the Aria on Monday, Nov. 11, 2019, in Las Vegas. (L.E. Baskow/Las Vegas Review-Journal) @Left_Eye_Images 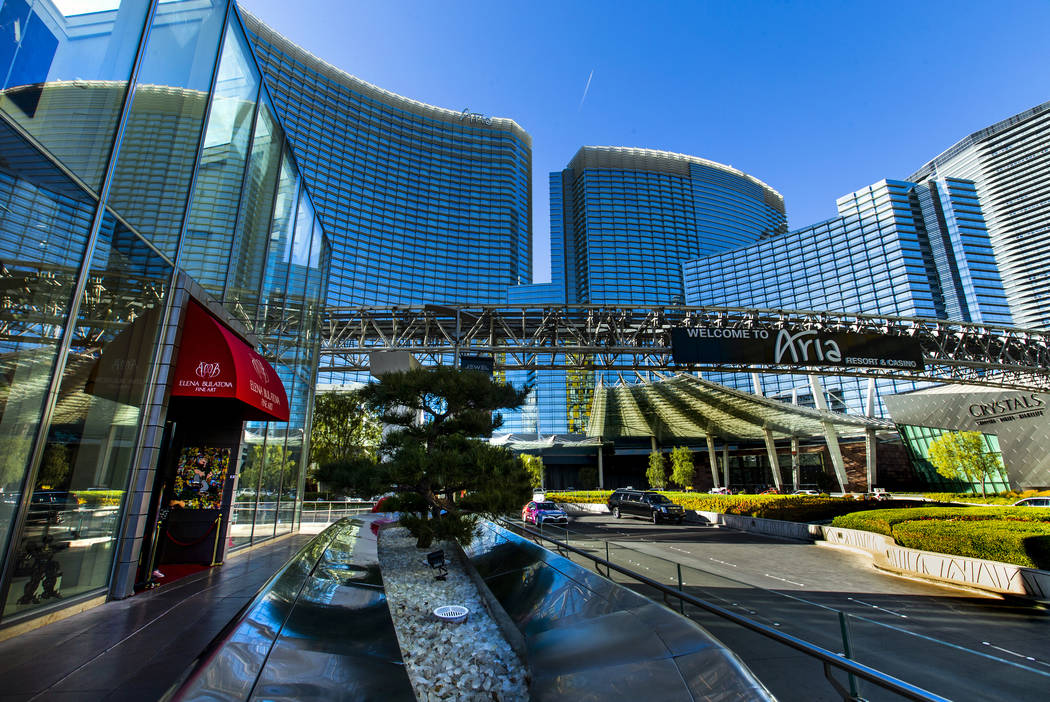 In the early 2000s, the Bellagio was the property of choice for serious poker players.

Its main allure for players was “Bobby’s Room.” Named after World Series of Poker champion Bobby Baldwin, the space is known for hosting some of the highest-limit cash games along the Strip.

It didn’t diminish the Bellagio poker room’s reputation or take away from its high-limit cash games, but “the Aria has given people a secondary option,” said professional poker player Daniel Negreanu, who said he enjoys the room’s location and service.

While many poker rooms have shut down over the last two decades, the Aria’s has grown. Almost 10 years after the company’s grand opening on Dec. 16, 2009, it’s still known by many professionals as the place to play.

“There’s a bit of prestige and glamour” associated with the property, said David Schwartz, instructor for UNLV’s department of history.

With the rise of televised and online poker in the late ’90s and early 2000s, interest in the card game skyrocketed. The number of poker rooms in Nevada shot up, from 72 in 2004 to 109 just three years later. Visitors could find easily a table, be it the Strip or downtown, and get the chance to rub elbows with some of the celebrities who had made a name in the game.

“Poker is different than a lot of sports,” Schwartz said. “If I walk into the Bellagio or Aria with enough money, I could get a table with a world-class poker player.”

But poker rooms only made sense as a revenue driver for a short time. The Unlawful Internet Gambling Enforcement Act of 2006 made illegal online gambling much harder, which cut into the game’s popularity, according to Schwartz.

“It led to fewer people playing, which led to a drop in people coming to Vegas to play poker,” he said.

Meanwhile, casino operators came to realize they could make much more money filing a poker room with slot machines.

“It’s tough to make money in poker because the game speed is slow,” said Anthony Lucas, a professor of casino management at UNLV. “They want to maximize the return on square foot of floor space, and poker doesn’t look good through that lens. … I think it was a normal business response.”

Professional poker player Andrew Neeme said Aria’s food and staff make it one of his favorite places to play.

It’s all about convenience, he said. The room is a short walk to both valet and self-parking, and sits right outside the casino. And if hunger strikes while Neeme’s in the middle of a game, staff can hand-deliver Thai food from Lemongrass.

“(It’s) the best standard food option in any Vegas poker room,” he said.

The room was built under the watchful eye of Baldwin himself, who was the acting president and CEO of CityCenter — the mixed-use development that encompasses the Aria — between 2005 and 2018. Baldwin declined to comment.

Neeme said the special touches in the Aria’s poker room hark back to features that make Bobby’s Room so popular. Both are close to valet, include an exclusive high-roller section and have staffers who can expertly deal both popular and obscure games.

“A lot of times a poker room will be an afterthought in the design of a casino,” Neeme said. “It’s often viewed as more of an amenity rather than a feature of a property. You can tell that the poker room at the Aria was carefully considered, from its location and design, to its staffing, and overall concept that this is designed to be a top-tier poker experience.”

And those qualities have proved to work, according to Shannon McCallum, Aria’s vice president of hotel operations.

“Every time I go (to the poker room), all of our tables are full and we have a waiting list of people ready to go in,” she said.

Neeme said the crowds and wait list can be a downside, but the Aria offers another playing space: the PokerGO studio. The venue opened in 2018 and streams live poker and esports events. While it’s outside the main casino along the Aria breezeway, it uses the property’s gaming license and hosts more than 100 annual events run by Aria’s staff.

“For all intents and purposes, this is an extension of the Aria poker room,” said Sam Simmons, president of PokerGO’s parent company, Poker Central.

The 10,000-square-foot space has awarded more than $56 million to players — many of whom are professionals — since it opened in May 2018. Negreanu said he’s a regular at the studio, where poker fans around the world can stream him playing live.

“I’ve never really seen anything like this, especially a high-end, state-of-the-art, really beautiful room,” he said. “(It’s) spacious, and the location’s right on the Strip. You can’t beat it.”

While most of the taped games are streamed on the PokerGO platform, the studio has agreements to air various tournaments on NBC and ESPN.

“The players just love to play here,” Simmons said. “We, alongside Aria, have really solidified this as the epicenter of high-stakes, competitive poker, certainly in Vegas if not the world. … Aria’s becoming a coveted name, a coveted brand for fans and players.”