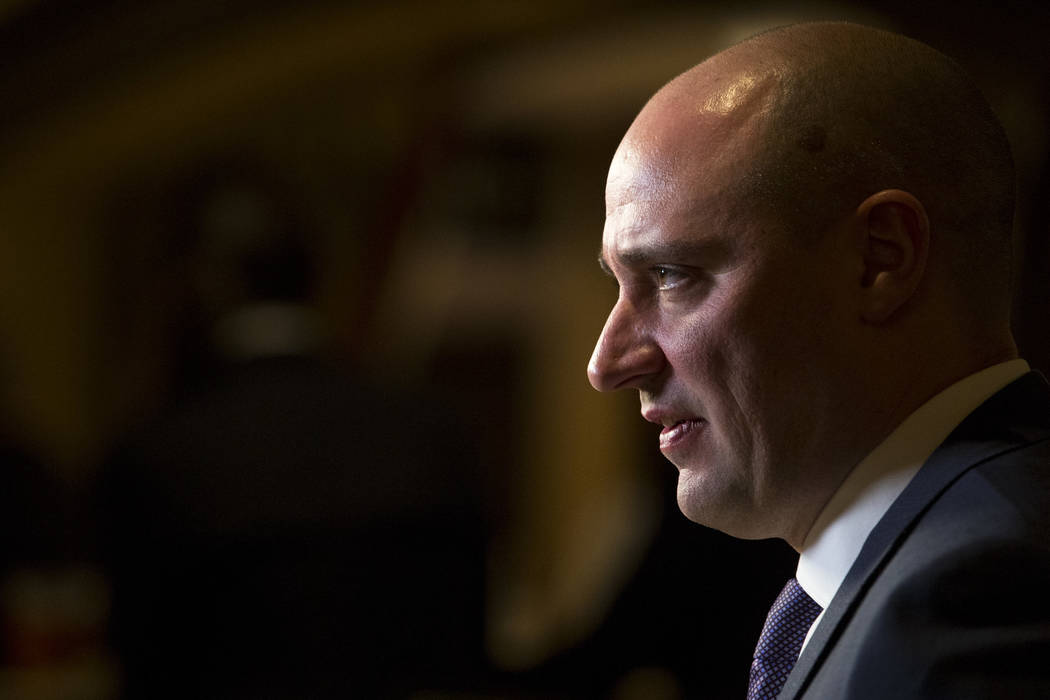 Wynn Resorts Ltd. was among the pack of casino companies whose shares fell Wednesday, even though its second-quarter revenue and earnings improved.

Shares fell more than 7 percent to under $155 in heavy trading after Wynn said revenue for its Macau properties gained 9 percent, which was less than what analysts expected.

Wynn CEO Matt Maddox announced new investments in Macau and said it expects mediocre third-quarter results in Las Vegas. He also offered an upbeat look at the company’s presence in Boston and its outlook in Japan.

A similar announcement by Caesars Entertainment Corp. earlier in the day resulted in the industrywide share slide, which also affected MGM Resorts International.

But Maddox was undaunted in his bullishness for Macau.

“I believe that Wynn Palace will continue to take market share in both mass (market customers) and VIP,” he said. “In fact, I’m so confident that I’ve assembled a team of the most creative people on the planet, and we’re in full swing planning our entertainment-focused development on the adjacent seven-acre parcel that fits between the new Lisboa (Palace, operated by the Stanley Ho family) and Wynn Palace.”

Maddox shrugged off the weaker-than-expected Macau results, saying they were typical for the market in the second quarter and that traditional visitors were distracted by the World Cup soccer tournament.

In a call with investors, Maddox described what’s ahead at Wynn Palace.

“The project is going to have indoor gardens. It’s going to have waterfalls. We’re working on a theater concept and a new food hall that’s going to focus on seafood, the best seafood anyone can find in that region, and it will be a culinary destination for Macau,” he said. “We know that our premium customers like these attractions.”

He said the proposals would be shown to Macau government leaders in the fourth quarter.

“The entertainment center will have various whimsical, immersive features taking into account what we’ve learned from our Prosperity Tree in Macau and the Lake of Dreams here in Las Vegas and amplifying it.”

No to price decreases

Maddox said the company refused to lower its room, show and other prices in Macau, as competitors have done.

“We are not going to compete on price by raising commissions or extending additional credit for short-term revenue gains,” Maddox said. “We compete by having the best product and service in the market.”

He said the upcoming capital investment in Macau properties would include the renovation of all rooms and suites at the Macau Encore property that opened eight years ago.

“We’re building two new restaurants in our original casino, adding 8,000 square feet of additional retail space which, by the way, still remains the world’s best and strongest-producing sales per square foot anywhere to be found.”

Maddox projected a rough third quarter in Las Vegas, primarily because it will be compared with a period in which the city hosted the huge Floyd Mayweather-Conor McGregor boxing match.

He said work is continuing on the company’s 400,000-square-foot convention facility on the former Wynn Golf Club course.

“I changed this project significantly from a $3-plus billion investment with a theme-park focus to a more luxury resort experience,” he said. “It’s early in the design stage, and we’ll continue to work on the master plan for the rest of the year.”

Maddox also acknowledged progress in the company’s Boston Harbor project, scheduled to open in less than a year, and the bid to win a concession to build a resort in Japan.

“The quality of the construction is some of the best we’ve ever experienced,” Wynn said of the Boston project where 1,600 workers are onsite. “We’re actually ready to start laying carpet on the first floor of the hotel tower within the next couple of weeks. We’ve installed lush landscaping around the site, and we’ve renovated the polluted river bank into a living shoreline and it’s connected by nearly two miles of boardwalk. The site is transforming into a destination resort.”

Maddox anticipates the company will be a major competitor in Japan.

“We have been quietly active in Japan for a number of years now. I’ve been dozens of times myself, building strong relationships in a country where trust and relationships matter,” he said. “We believe that the Wynn aesthetic and our unrelenting focus on excellence and our commitment to thoughtful, immersive entertainment will resonate well in Japan, and we look forward to competing there.”