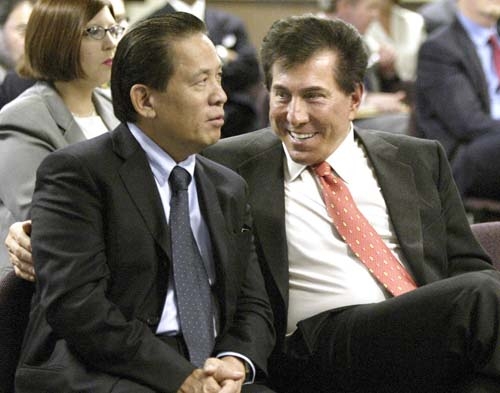 Wynn Resorts Ltd. CEO Steve Wynn escalated his dispute with his former business partner and ex-company vice-chairman Kazuo Okada on Monday, accusing the Japanese billionaire of trying to divert attention from his “misdeeds.”

“What is remarkable in the Universal Entertainment response is that they do not deny violating the Foreign Corrupt Practices Act or otherwise contradict the company’s statement,” Wynn Resorts said in a statement.

Wynn Resorts said Sunday it had bought out Okada’s stake after determining the Hong Kong-based casino tycoon and his associates made improper payments to overseas gaming regulators. It also asked him to resign from the Wynn Resorts board of directors.

In another move to distance itself from Okada, the upscale Okada Japanese restaurant adjacent to the entrance to the Tryst nightclub at Wynn Las Vegas was closed — Wynn Resorts won’t say when – and all traces of the Okada name have been removed. A sign posted there said that the space is being renovated.

While references to the restaurant named for Wynn’s longtime business partner have been scrubbed from the resort’s website, Okada was still listed as a director of Wynn Resorts on the corporate website on Monday.

Okada’s company, Universal Entertainment Corp., called the move to seize his 24 million shares “outrageous” and said more oversight of the Wynn Resorts board of directors is needed. It also indicated that Okada will fight the move.

“Universal Entertainment will take all legal actions necessary to protect its investment and prevent a forced redemption of its shares,” the Tokyo-based gaming company said in a statement.

While Wynn’s move against Okada is limited to his investment in Wynn Resorts, it could prompt an examination of Okada’s subsidiary, Aruze USA Inc., a slot machine manufacturer licensed in Nevada since 2004.

State regulators had no comment on the allegations on Monday.

“We will conduct our own investigations and come to our own conclusions,” said Mark Lipparelli, chairman of the Nevada Gaming Control Board.

Wynn Resorts has scheduled a conference call for analysts and the media for 6 a.m. today to address the acrimony between the one-time friends and business partners.

Bloomberg News reported Okada visited the office of the Philippine Amusement and Gaming Corp., a regulatory body, in Manila on Monday and denied giving cash to officials. Doing so would violate the U.S. Foreign Corrupt Practices Act, which prohibits companies from paying bribes in doing business overseas.

Okada told PAGC Chairman Cristino Naguiat that $110,000 in gifts to officials there, cited by Wynn Resorts in ousting Okada, were “complimentary accommodations” granted to his business associates from the Philippines and other countries from 2008 to 2011. Okada also apologized to Naguiat because he and his staff have been dragged into the ongoing dispute, Bloomberg reported.

The shares are worth about $2.7 billion, but Wynn Resorts said it would pay Okada $1.9 billion, 30 percent less than current value, for his shares over the next decade.

Wynn Resorts said Sunday that its articles of incorporation allow it to forcibly buy back shares in such cases.

“Over the course of an extremely thorough year-long investigation, Mr. Okada has had numerous opportunities to explain his actions and provide evidence to refute the allegations,” Wynn Resorts said Monday in a statement. “He never did so.”

Rather, the company contends, Okada chose to attack Wynn Resorts’ board.

“In light of the report and its findings, the company needed to act swiftly to take the necessary steps to protect stockholders and the company’s gaming licenses from the actions of Mr. Okada and his affiliates,” Wynn Resorts said.

U.S. markets were closed Monday for the Presidents Day holiday. Wynn Resorts shares are expected to open today at $112.69 on the Nasdaq Global Select Market.

“We would not be surprised to hear investors question whether this dispute, as it continues to get uglier, will further raise the antennas of gaming regulators in both Macau and Nevada,” said Carlo Santarelli, an analyst with Deutsche Bank.

Santarelli said he thinks Wynn Resorts has “acted prudently and responsibly in self-policing, and as such, is largely isolated from punitive damages stemming from potential back and forth accusations and a potential broader investigation.”