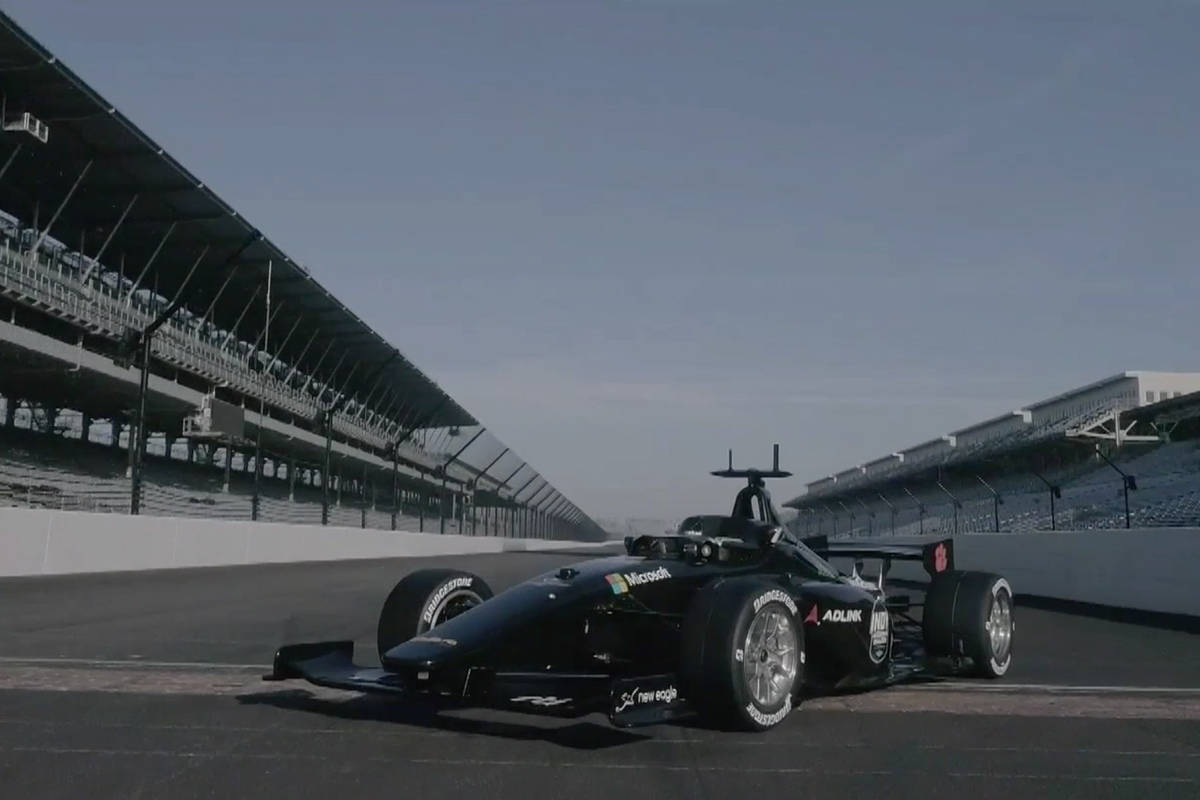 Autonomous race cars will hit the Indianapolis Motor Speedway later this year, and their design was revealed for the first time Monday during a CES Media Event presentation. (Screenshot) 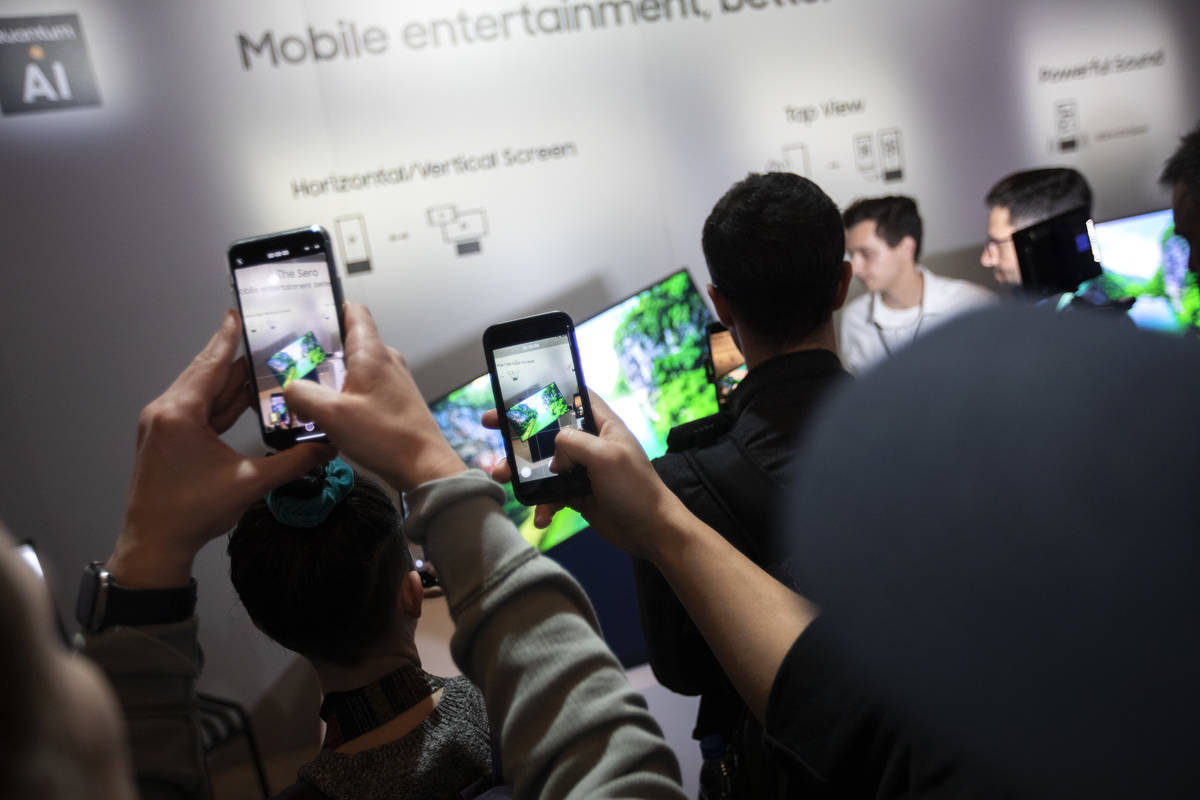 Media Day began at 4 a.m. with press conferences every hour, on the hour through 2 p.m. Follow along here for the Review-Journal’s coverage throughout the day.

Sony on Monday touted a slew of products further blurring the lines between the screen and the self.

The Japan-based electronics and media company finished 2020 with a bang via its November release of the PlayStation 5 video game console.

Ryan said the company was looking forward to its video games hitting movies and television this year: specifically, the upcoming Tom Holland film “Uncharted,” based on the treasure hunting action series by the same name, and an eponymous “Last of Us” TV series coming to HBO.

Additionally, the company is launching a new set of its Bravia TVs that uses what it calls “the world’s first cognitive intelligence” processor. The “Cognitive Processor XR” is programmed to think, see and hear the way humans do, matching the picture with focal points for human attention and the sound with what is on the screen.

The cars will debut in the speedway’s Indy Autonomous Challenge, a million-dollar prize race featuring 20 laps, more than 30 teams and zero drivers.

More than participating 30 teams have each created their own algorithms for a self-driving racecar, and they will compete against one another in late October in a fully autonomous race at the Motor Speedway. The competition’s goal is “harnessing the power of prize competitions” to advance the field of autonomous transportation, according to Paul Mitchell, president and CEO of Energy Systems Network, an Indiana-based public-private technological initiative.

Where the cars primarily differ is how they are programmed to drive. The competing teams, comprising university students across the U.S. and world, have each developed their own algorithm for how the car drives.

The race is scheduled for Oct. 23.

From robots to wearables, leaders from the CTA say there are numerous trends to watch for at this year’s CES convention.

Rohrbaugh also pointed to smart home appliances as an area to watch during this week’s convention, and research vice president Steve Koenig added that CES 2021 is the year for augmented reality glasses.

As for at-home technologies, Koenig said CES attendees can expect to continue to see advancements with TVs, including 8K and OLED screens.

Intel’s Media Day presentation focused on Mobileye, a subsidiary that focuses on autonomous vehicles, or AVs. A Q&A with Amnon Shashua, president and CEO of Mobileye and senior vice president of Intel, highlighted just how much progress AV technology has made in recent years.

“Mobileye is a growth engine for (Intel),” Shashua said from a recorded message filmed in the Mobileye garage in Israel. “We’re working on the future of mobility.”

The company is working to map the world and upload it into the cloud. In Munich, the company was able to map 20,000 kilometers of data in two weeks before demonstrating the autonomous technology. Now, the company is looking to scale and move on to Shanghai, Tokyo, Paris, Detroit and potentially New York within the next few months.

What a way to go.

Kohler’s “Innate” toilets can open when someone walks in the bathroom and flush automatically, said Jonathan Bradley, the kitchen and bathroom company’s smart home lead. Innate toilets will become the company’s entry-level intelligent toilet, starting at $3,300.

The company envisions a bathroom where people can use the toilet, sink or shower without having to touch any of them, Bradley said. Kohler already offers intelligent toilets and smart showerheads with voice-responsive technology.

It’s introducing a new bathtub inspired by traditional Japanese soaking, with potential upgrades including a “perfect fill” water depth and temperature monitor, a fog or aromatherapy dispenser, and an “infinity overflow” that recycles overflowed water into a grate system.

Kohler also highlighted a smart kitchen faucet capable of dispensing metered water — like a cup or a liter — and tracking how much water it uses.

Chief Technology Officer Sajjad Khan said the new entertainment system model will be introduced in the company’s new fully electric sedan, the EQS, which is due “very soon.”

The artificial intelligence-backed technology includes three screens behind a glass surface and can assist drivers by suggesting certain controls at certain times.

“You don’t search for functions. They will find you,” Khan said.

Passengers will be able to see relevant vehicle information as well, or use one of the screens for entertainment. An intelligence camera-based concept prevents the driver from looking at the passenger display.

At CES, Khan showed what would happen if a driver asked the device, “What can you tell me about this building?” while driving through Las Vegas. MBUX was able to tell him that the building he was referring to — the Strat — is a famous landmark in the city known for its rides and attractions.

Osaka-based Panasonic announced a partnership with Illuminarium Experiences, an experiential entertainment brand that creates immersive entertainment shows presented inside custom-designed venues, at CES. The company will open its first three 30,000-square-foot venues in Atlanta, Miami and Las Vegas, with the first — WILD: The World’s First Virtual Safari — set to open in Atlanta in mid-2021.

He said the company’s gigafactory in Sparks “continues to grow to meet EV battery demand for Tesla vehicles.” He said the factory added its 14th cell assembly line in the past year, “increasing capacity by 10 percent and creating many new jobs.”

Panasonic is pushing for innovations inside vehicle cabins as well. One of the most interesting new developments is Panasonic’s next generation of Augmented Reality Head-Up Displays, or AR HUDs. The system projects 3D, artificial intelligence-driven information, using eye-tracking technology to project the information at the driver’s level of sight. The technology allows drivers to easily view speed, object and pedestrian detection, and mapping and route guidance.

The company also announced the launch of its newest organic light-emitting diode, or OLED, TV model, headphones and the HomeChef, a four-in-one multioven that includes an inverter microwave, convection oven, broiler and air fryer.

Dutch electronics company Philips executives announced a new line of AI toothbrushes that will debut at this year’s CES event. Company executives Monday morning discussed the ways their health products can help people at home or in a professional setting.

Its new Sonicare 9900 Prestige series will come powered by artificial intelligence. This smart toothbrush can change its electronic buzzing based on the pressure its user applies. Users can adjust the toothbrush toward cleaning, plucking, gum health or whitening, and an associated app can coach people toward better brushing technique based on their habits.

A smarter, sustainable future will require more than a little work, and Samsung plans to lend a hand.

The South Korean-based electronics company showcased several of its artificial intelligence-powered robots and sustainability initiatives Monday morning at CES’ virtual Media Day event. Among the smart robots: BotHandy, a cylindrical-bodied robot with a gripping hand capable of recognizing objects in its surroundings and completing simple household tasks like setting the table.

Its AI processor can transform HD television progamming into a more powerful 8K display. Its JetBot90 AI+ robo-vacuum uses AI to map its surroundings, watch out for fragile objects and avoid snagging on a cord. Another AI robot acts as a proactive assistant, noting when someone has been using their computer too long and could use a stretch, or offering reminders of a meeting and then displaying the virtual meeting on a screen attached to its head.

Samsung also pitched its sustainability initiatives. The company won a 2020 CES Innovation Award at last year’s event for its “upcycled” product packaging that can be repurposed into small furniture, beginning with its “The Serif” TV line. That type of packaging will expand across all of its TVs in 2021, the company announced in a 30-minute presentation.

A lot of things changed in the past year. Consumers are spending more time at home, and many are more concerned about their personal health and safety.

LG Electronics has launched a number of new products to meet these new consumer demands.

A number of new products focused on health and wellness, from high-tech face masks and portable air purifiers to refrigerators that clean water dispensers with UVnano technology.

The company also showcased products built for commercial use, including the CLOi UV-C robot. The autonomous disinfection robot was designed to wheel around hotels and other retail businesses, and uses UV lights to disinfect high-touch surfaces. Motion sensors allow the machine to shut down when movement is detected.

The product was introduced by Rhea, a virtual human dressed in a pink hoodie who introduced herself as a songwriter and DJ.

LG also showed off new models of televisions, laptops and more in the 30-minute presentation.

While the virtual format prevented the company from showing off certain details in person, the company was creative with its presentation. Videos showed off what certain gadgets look like in action, moving graphics kept the video from getting stale and speakers branched out from company leaders to include executives from partner companies like Disney and Rhea, the virtual speaker.