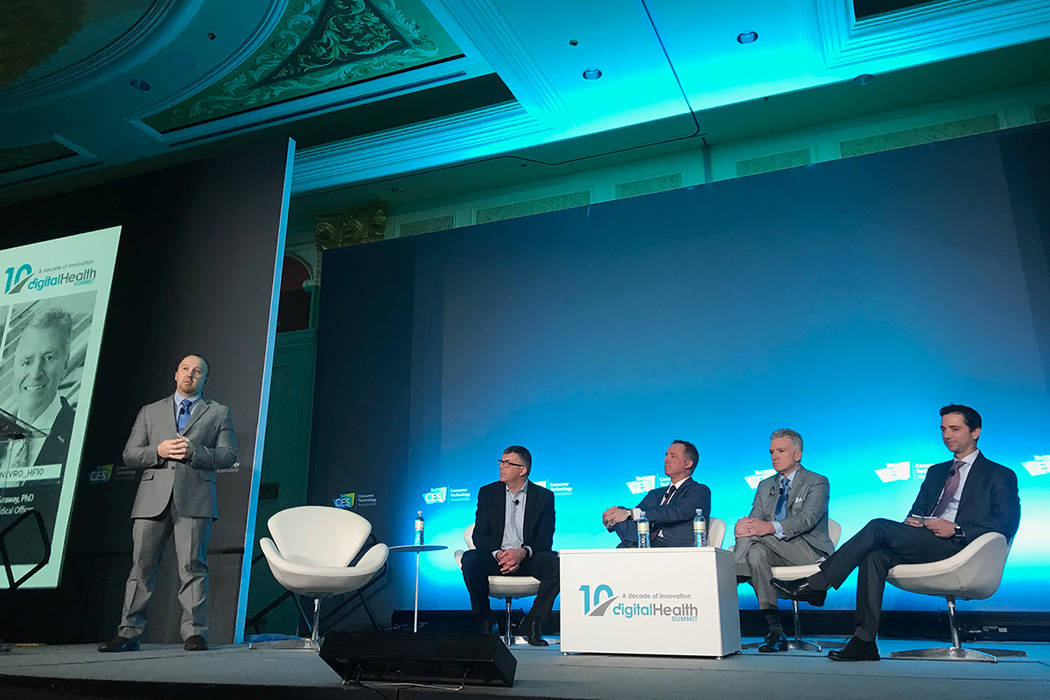 Steven Falowski of the North American Neuromodulation Society moderates a panel on neuromodulation at CES on Tuesday, January 8, 2019. To his left, from left-to-right, are Ryan Lakin of Abbott, Matthew Thomas of Medtronic, David Caraway of Nevro and Rafael Carbunaru of Boston Scientific. (Jessie Bekker/ Las Vegas Review-Journal).

Nerve stimulation to treat neurological conditions such as Parkinson’s disease, addiction and chronic pain has been around for the past five decades, experts say.

But the lack of knowledge of its existence — and proven effectiveness — led in part to the rise in the national opioid epidemic, five doctors and engineers said during a panel at CES on Tuesday.

This discussion, titled “The Solution to the Opioid Crisis No One is Talking About,” brought together executives from medical device makers Medtronic, Boston Scientific, Abbott and Nevro, with the North American Neuromodulation Society, to discuss the history behind neuromodulation to treat chronic pain.

“Chronic pain is more common than heart disease, cancer and diabetes combined,” panel moderator and NANS secretary Dr. Steven Falowski told a crowd of CES attendees. “This is a very safe and effective therapy, with a lot of data and publications to back it up.”

In no more than 20 minutes, electrodes on a needle stimulate nerves in the spine to eliminate pain, he said. Some implants last up to a decade.

“The technology has come so far,” Falowski said.

It’s what Rafael Carbunaru, head of research and development at Boston Scientific, called the “ultimate wearable.” Once under the skin, the device must be malleable enough to track stats and adjust to the ever-changing body of the patient while the implant remains intact.

“In this early data that we’re getting, 87 percent of patients are getting better than 50 percent pain relief,” he said. Almost one-quarter of patients said they were pain-free by their follow-up appointment.

Though research is available, there isn’t enough of it, Dr. David Caraway from Nevro said. And that affects the cost of the product for patients.

“If we don’t have high-level evidence, guess what? The insurance companies aren’t going to pay for it,” he said.

It sounds like a dream. So why isn’t it the norm in treatment, and why don’t more patients know to ask their doctors about it?

Caraway said he’s not sure there’s an answer.

“For a long time, there was an emphasis on other approaches, whether it was opioids in the ’90s, which was a huge mistake … or really physicians that treat these patients didn’t know about this therapy,” Caraway said.

Now his company creates marketing materials encouraging those living with chronic pain to ask their doctors about neurostimulation.

“It’s a very exciting time in this field, and we’re bringing it forward,” Carbunaru said.

What is degenerative disk disease and what can be done about it?