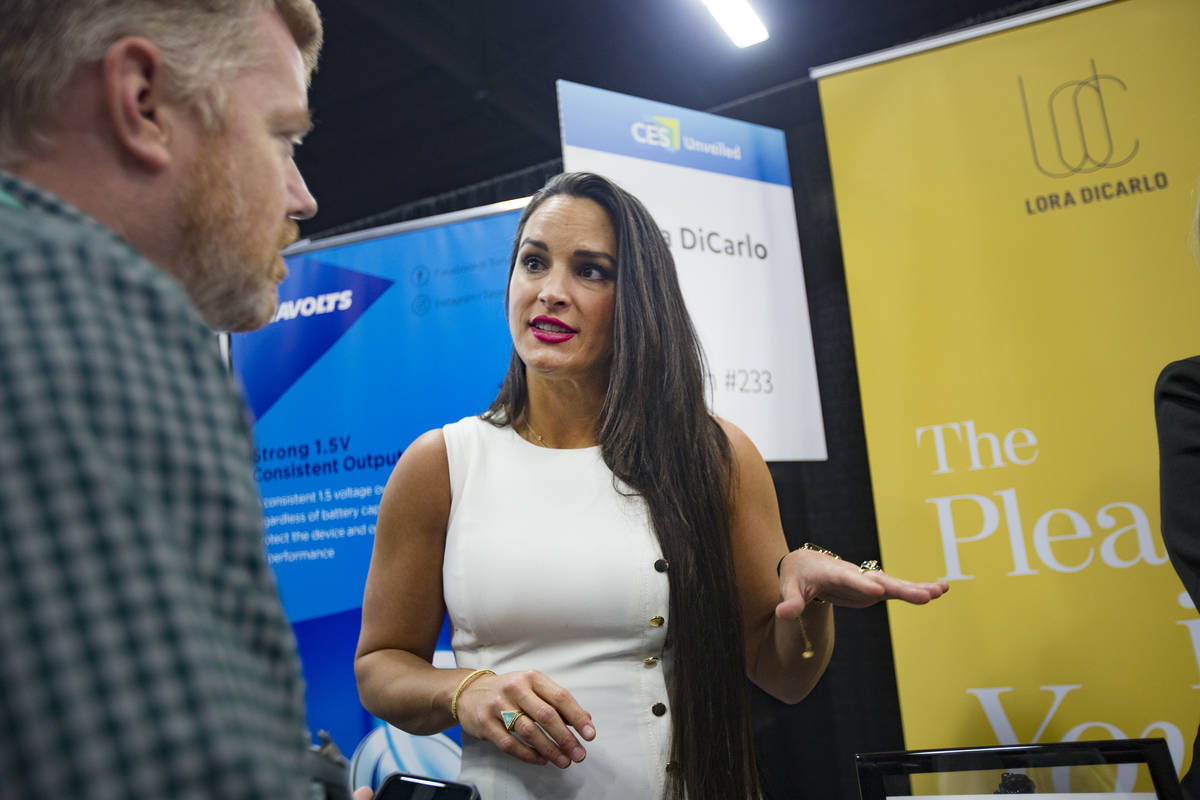 Lora Haddock, founder and CEO of Lora DiCarlo, a sex toy company designed to tailor to women's pleasure, speaks with a guest at her booth at CES Unveiled at Mandalay Bay in Las Vegas, Sunday, Jan. 5, 2020. The company has won awards for Ose, a robotic massager for hands-free blended orgasms, as well as two new devices that won a CES 2020 Innovation award.(Rachel Aston/Las Vegas Review-Journal) @rookie__rae 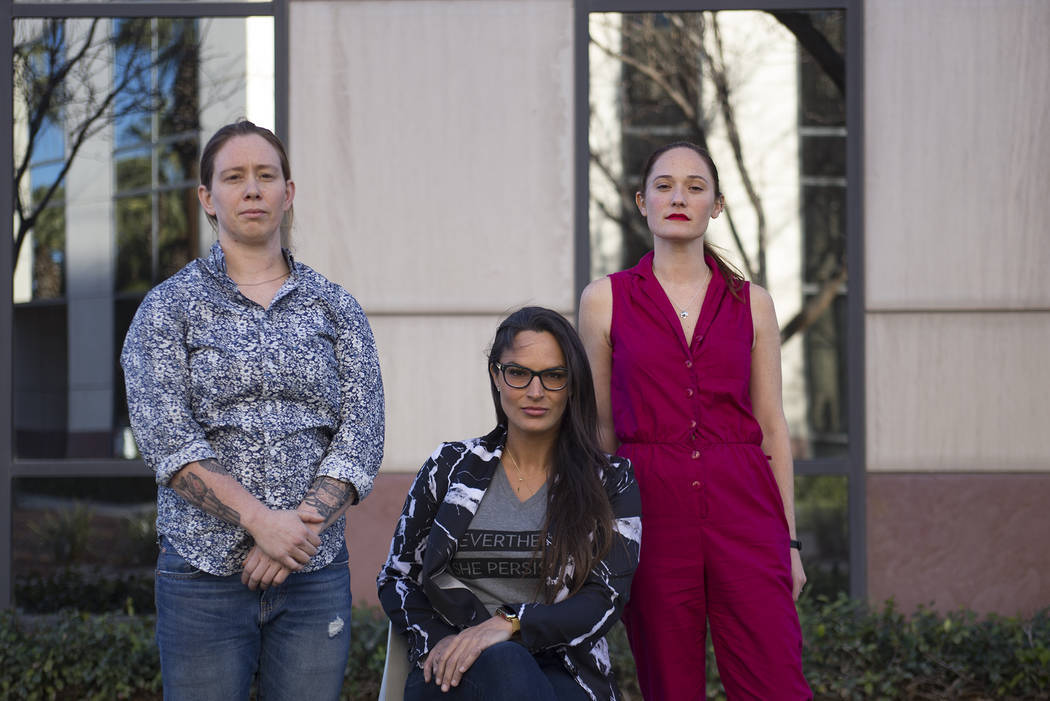 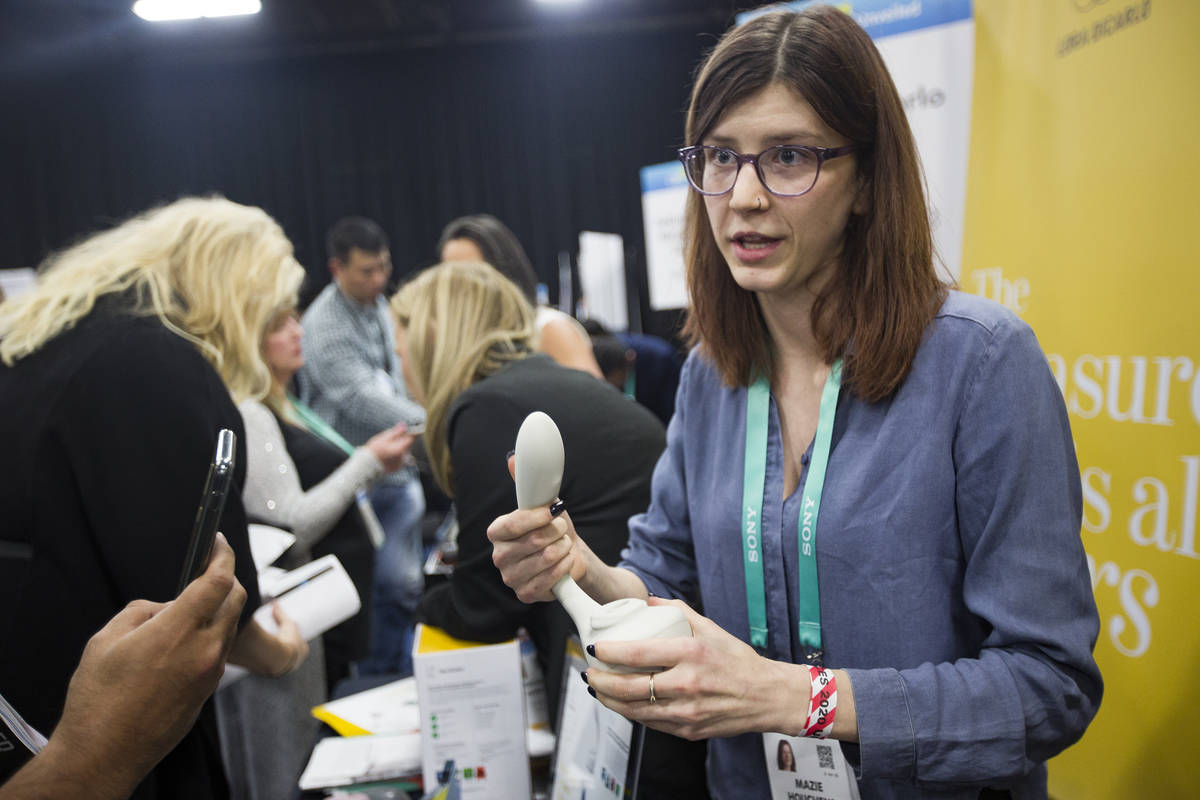 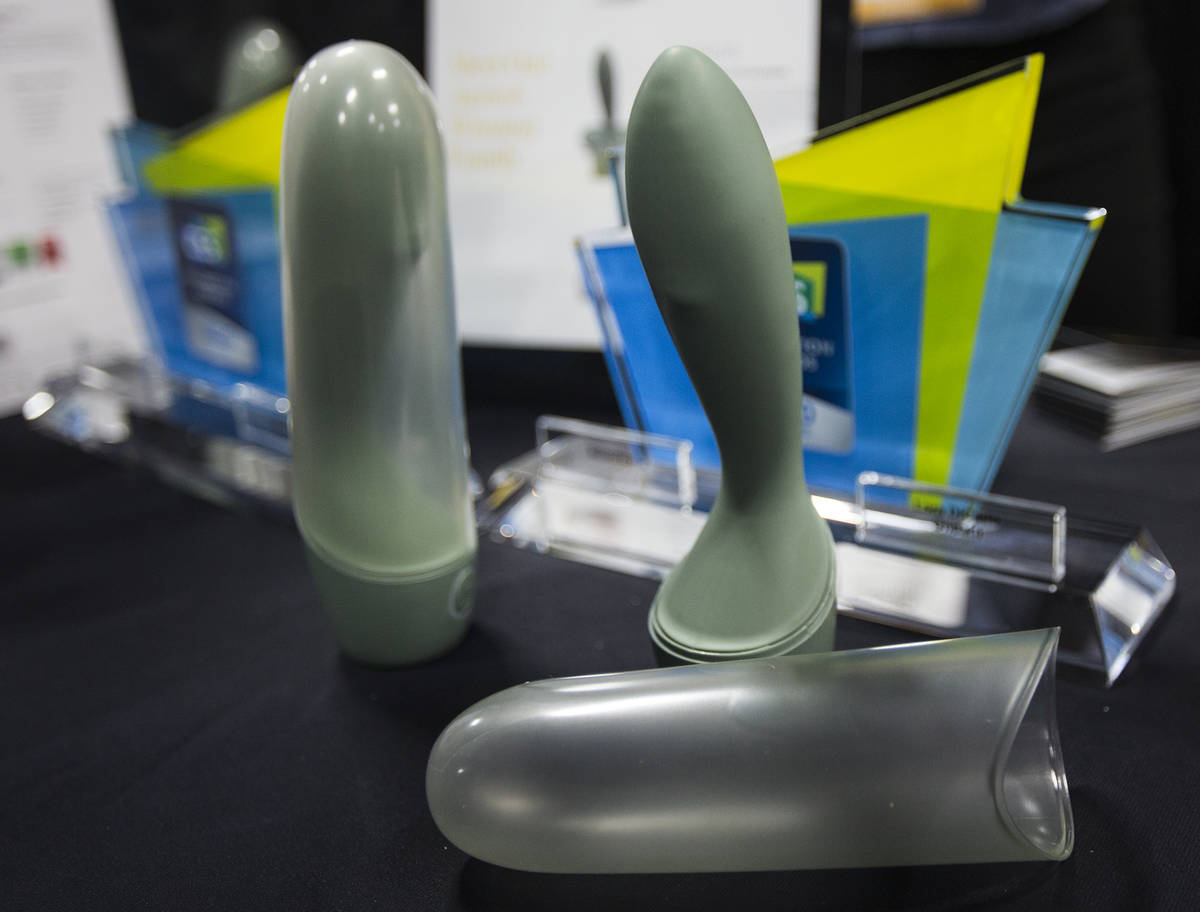 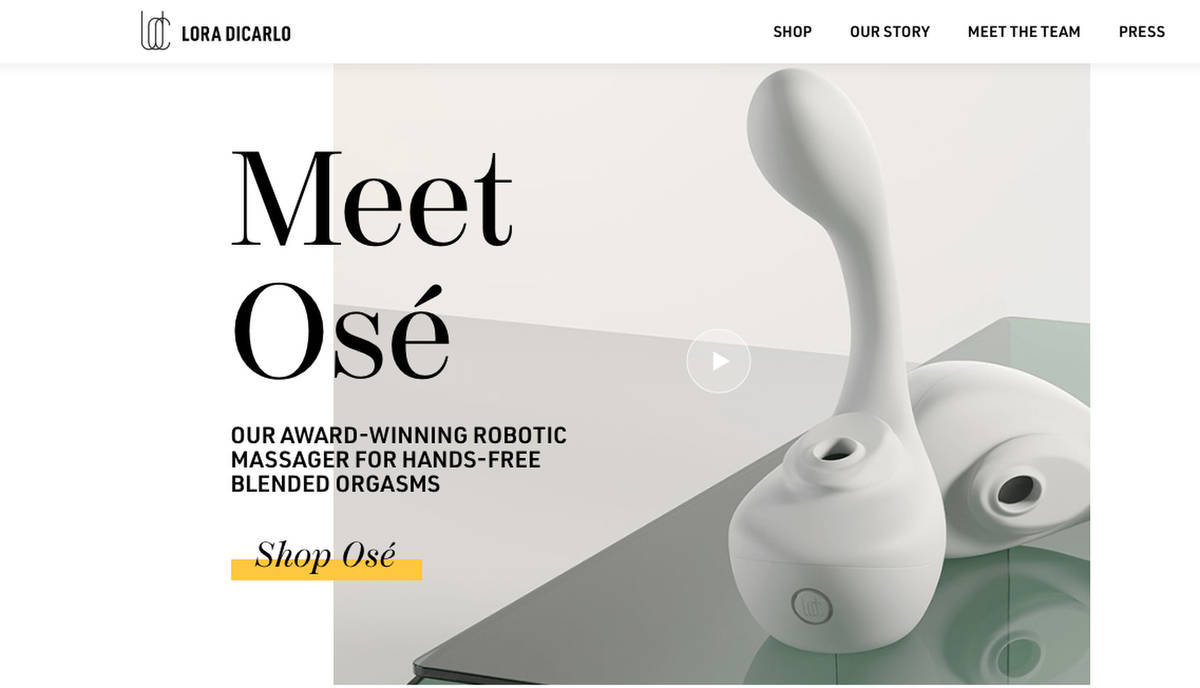 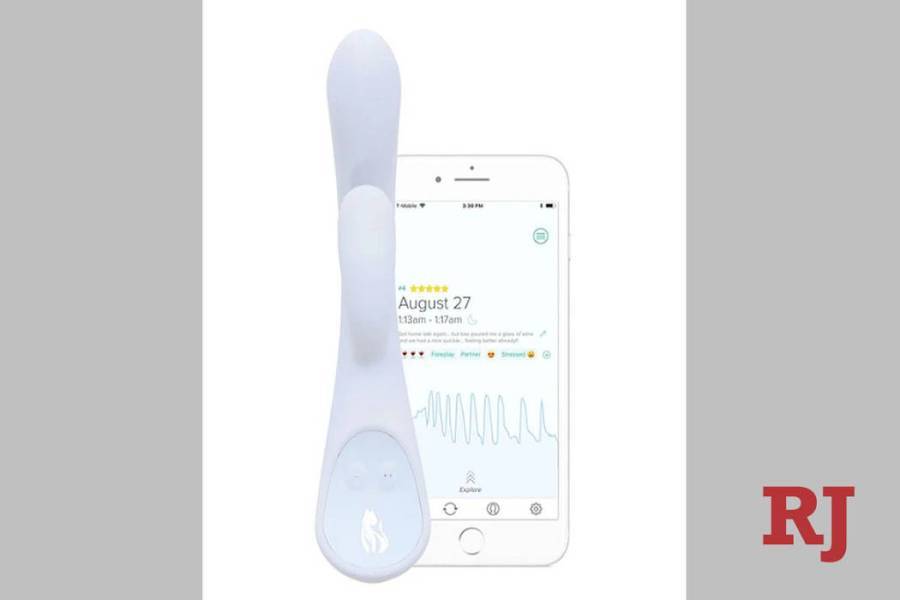 The tech that turns you on is back for year two with CES approval.

Though this year’s virtual format throws a wrench in the usual floor exhibition, the 2021 international consumer electronics show marks another year of validation for an emerging sex tech industry trying to break through taboo and stake its claim in the tech world.

Last year’s show was the first where sex tech products were eligible to win awards and exhibit under the health and wellness category, following a series of events in 2019 that saw a pleasure product win, then lose and later win back a CES Innovation Award. Institutions like CES shows are in many ways the “gatekeepers” for a technology’s visibility, and the 2020 event marked a “watershed moment” for sex tech’s legitimacy as an industry, according to Liz Klinger, CEO and co-founder of AI robotics company Lioness.

Sex tech’s inclusion at CES and categorization under the health and wellness banner gives “people permission to talk about” sexuality and the ways technology can improve their sex lives and overall well-being, adds Stephanie Trachtenberg, director of marketing for Satisfyer.

“It’s been a number of years to get to this point,” she said.

Satisfyer won a pair of CES Innovation Awards for its “Love Triangle” air-pulse stimulation device and associated app, which allows users to control the settings of their robotic product through music, voice and other programs. It was the only sex tech company to win innovation awards ahead of the virtual show, which spans Monday through Thursday.

The CEOs of Lora DiCarlo and Morari each teased separate upcoming announcements at this year’s event for their respective companies.

It wouldn’t be the first time Haddock’s company caused a CES kerfuffle.

Lora DiCarlo’s 2019 experience catalyzed sex tech’s formal inclusion at the trade show. The company won an award for its vibrator-like prototype, only for the show’s sponsor, the Consumer Technology Association, to yank both the company’s honor and show floor space just two months before the event. A CTA spokesperson previously told the Review-Journal the product didn’t fit into any categories. According to Haddock, CTA told her any products deemed “immoral, obscene, indecent, profane or not in keeping with CTA’s image will be disqualified.”

Haddock then made her case to the public. Tech that benefits sexual health and wellness deserves to be recognized as a health and wellness product, she argued. As UNLV associate professor of gender and sexuality studies Lynn Comella put it, “to that company’s credit, they did a phenomenal PR blitz” and raised legitimate concerns of gendered bias.

Though New Hampshire-based OhMiBod was exhibiting its sex toys at CES as far back as 2011, Lioness’ Klinger recalled feeling like “a bit of an outlaw” for her company’s 2018 CES debut. CES turned down the fledgling company’s bid for an exhibit, but Klinger got in anyway.

“It’s like this wave of change,” Klinger said. “Like, oh my God, we’re seen. We are seen as a company and something — work that is worthy.”

Companies aren’t taking their place at CES for granted.

Their location on the show floor last year sprinkled throughout the health and wellness section, not just tucked away in a corner, reinforced the idea they belonged, according to Morari Medical CEO Jeff Bennett. His company is developing a product that uses electricity to inhibit nerve sensors and prevent premature ejaculation.

How the 2021 virtual format will impact his business’ visibility, he’s not sure. But another year at CES gives the company standing it has struggled to find elsewhere. Social media companies block advertising requests due to their sexual nature, a problem cited by Bennett and other executives.

“We’re solving a real problem that is a quality of life issue,” Bennett said.

Comella said newer companies craft a careful marketing image as sex tech, not toys, which “brings with it a certain kind of gravitas; a very particular framing that’s paid off.”

Ours remains a “very sexually illiterate culture” that struggles to talk about sex, she said, adding boundary-pushing conversations remain the strongest way to normalize sexual pleasure, health and wellness. The tech sphere is just another place to have them.