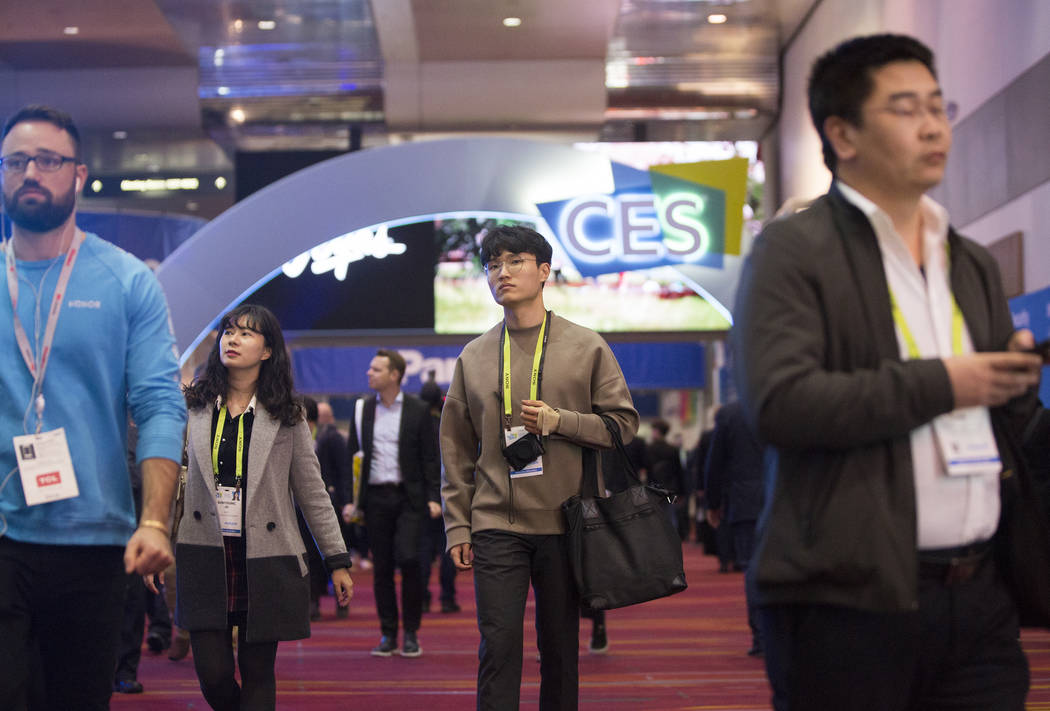 Convention goers explore the Central Hall during the last day of CES 2019 on Friday, Jan. 11, 2019, at the Las Vegas Convention Center, in Las Vegas. The four day tech event brings over 4,500 vendors and 180,000 attendees, and is the largest annual show in Las Vegas. (Benjamin Hager Las Vegas Review-Journal) 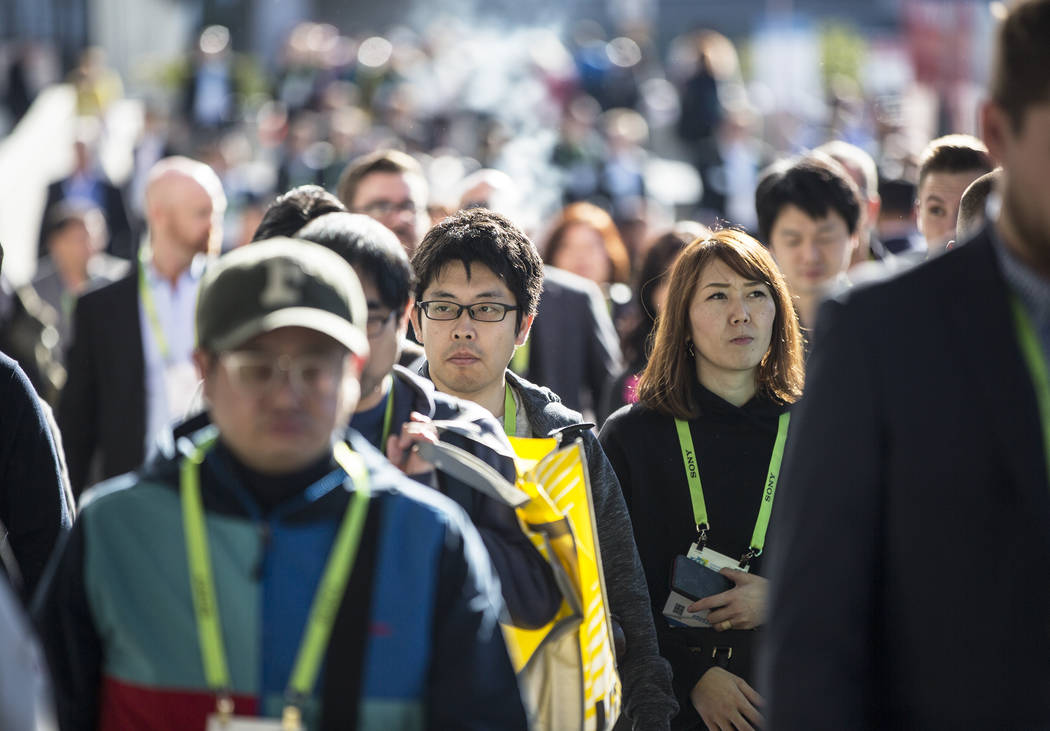 The sidewalks outside the Las Vegas Convention Center are packed during the second day of CES 2019 on Wednesday, Jan. 9, 2019, in Las Vegas. The four day tech event brings over 4,500 vendors and 180,000 attendees, and is the largest annual show in Las Vegas. (Benjamin Hager Las Vegas Review-Journal) 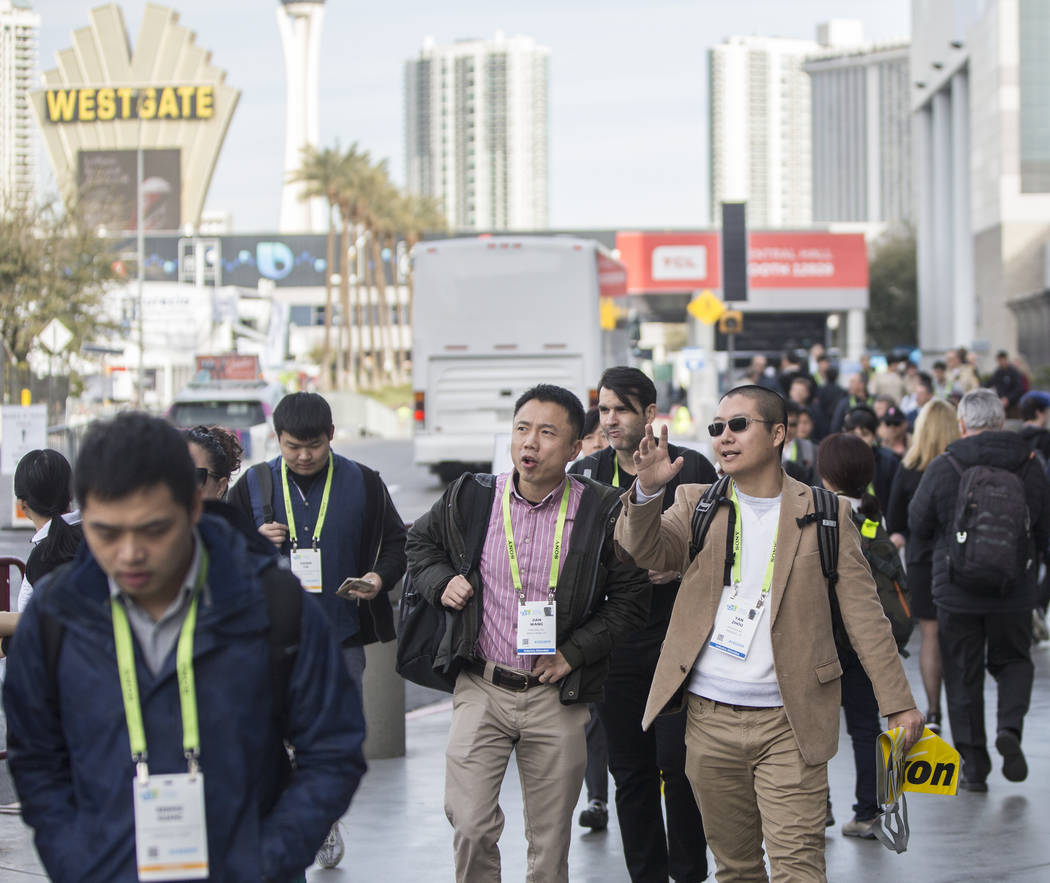 The sidewalks outside the Las Vegas Convention Center are packed during the last day of CES 2019 on Friday, Jan. 11, 2019, in Las Vegas. The four day tech event brought over 4,500 vendors and 180,000 attendees, and is the largest annual show in Las Vegas. (Benjamin Hager Las Vegas Review-Journal)

Las Vegas visitors may want to think twice before booking a stay the second week of January.

That influx of visitors is pushing up room rates across the valley. The median hotel booking price during the week of CES is $254 compared with $90 the following week, according to data drawn from travel search company Hipmunk in August.

And room rates are expected to continue to rise between now and January, according to Kelly Soderlund, a travel trends expert with Hipmunk.

“Bookings for the week of CES start to pick up mid-November and hit their peak the week prior,” she said. “Any time there is a timely, location-based event — where there is an increase in demand on a set amount of inventory — we’ll see hotel prices rise.”

Bob Clift, vice president of sales for The STRAT, said the property sees a “significant increase in business” during conventions.

The property’s location — just a little more than a mile north of the Las Vegas Convention Center — could explain why rates during CES 2020 are $442 a night, 17 times higher than the $26 a night it charges the following week, according to data collected in August from Hotels.com.

“The impact of CES is very strong,” Clift said. “We see an increase in business in every area of the property, from food and beverage and meetings to the casino and entertainment.”

Clift said conventions such as CES shaped the property’s $140 million remodel. The STRAT upgraded rooms to maximize efficiency as a workspace and added charging ports to tables in the new View Lounge and other common areas.

In turn, Clift said the company has seen an increase in business in its SkyPod and meeting rooms and its observation deck, which is “frequently utilized for corporate events.”

Strip properties especially see a large jump in room rates during CES — the Wynn Las Vegas is charging $1,032 per night — but properties don’t need to be on Las Vegas Boulevard to see a spike in demand. Beynon said heavily attended events such as CES have historically created a “spillover effect” to properties off the Strip.