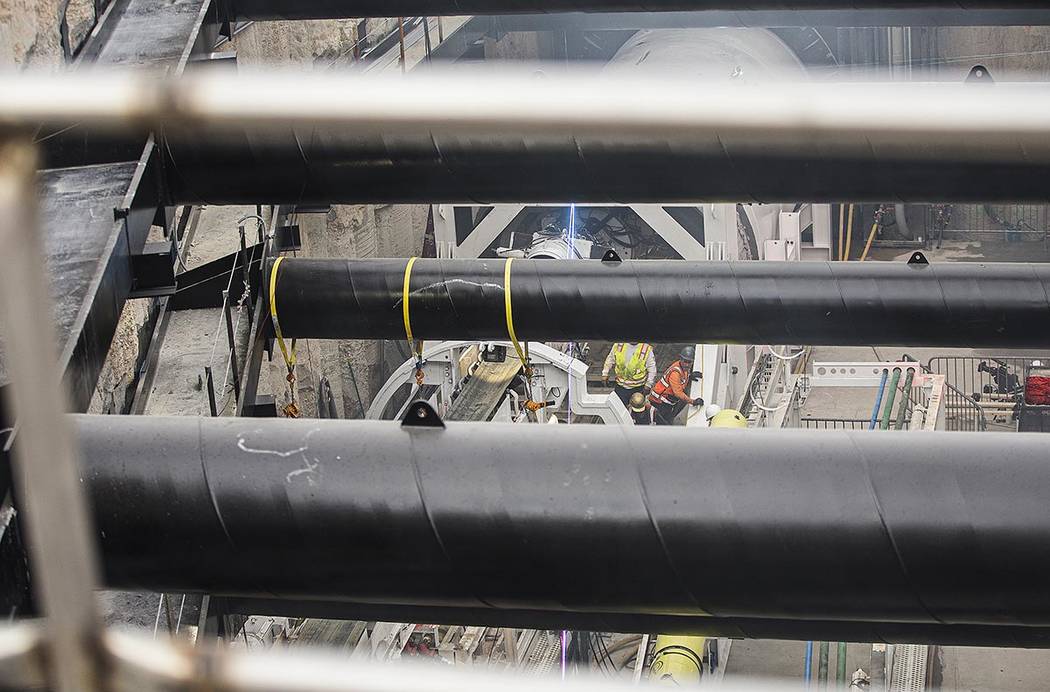 The tunnel boring machine begins work at the future location of one of the underground people mover stations just east of the South Hall at the Las Vegas Convention Center on Friday, Nov. 15, 2019, in Las Vegas. (Benjamin Hager/Las Vegas Review-Journal) @benjaminhphoto

The drill is tunnelling to a location near the West Hall and should get there by February or March.

Las Vegas Convention and Visitors Authority President and CEO Steve Hill told board members Tuesday that the project got off to a slow start — but it was all by design.

Hill explained that the drill is at its best when the entire 300-foot length of the machine is extended underground.

“It’s like crawling,” he said in an interview. “The machine pushes against the tunnel and moves itself forward. … So they have to go pretty slow when it starts, and then it picks up.”

Hill has always said that the project would create minimal surface disruption because it is underground. That means the first of two parallel tunnels should emerge near the West Hall before spring.

When the drill reaches that point, it will be removed from the tunnel, disassembled and moved back to the launch pit to drill the second, parallel hole.

Once the holes are completed, vehicles on Tesla chassis will be used to shuttle up to 16 passengers per vehicle to one of two stations.

The vehicle will top out at about 35 mph and will travel across the mile-long tunnel in a couple of minutes. On foot, such a trip would take 15 to 20 minutes, and there’s no direct route.

Representatives of the LVCVA and The Boring Company, developed by entrepreneur Elon Musk, broke ground on the project and flipped on the switch that began drilling Nov. 15 at the bottom of a 40-foot pit near the east entrance of the Convention Center’s South Hall.

The people-mover, due to open in time for CES 2021, is expected to be less expensive to build than conventional subway trains because the total diameter of the parallel tunnels, at 28 feet, are less expensive to produce. The interior diameter of a single tunnel is 12 feet with the outer casing at 13.5 feet. Boring officials say the system will cost three to four times less to build than a conventional transit system.