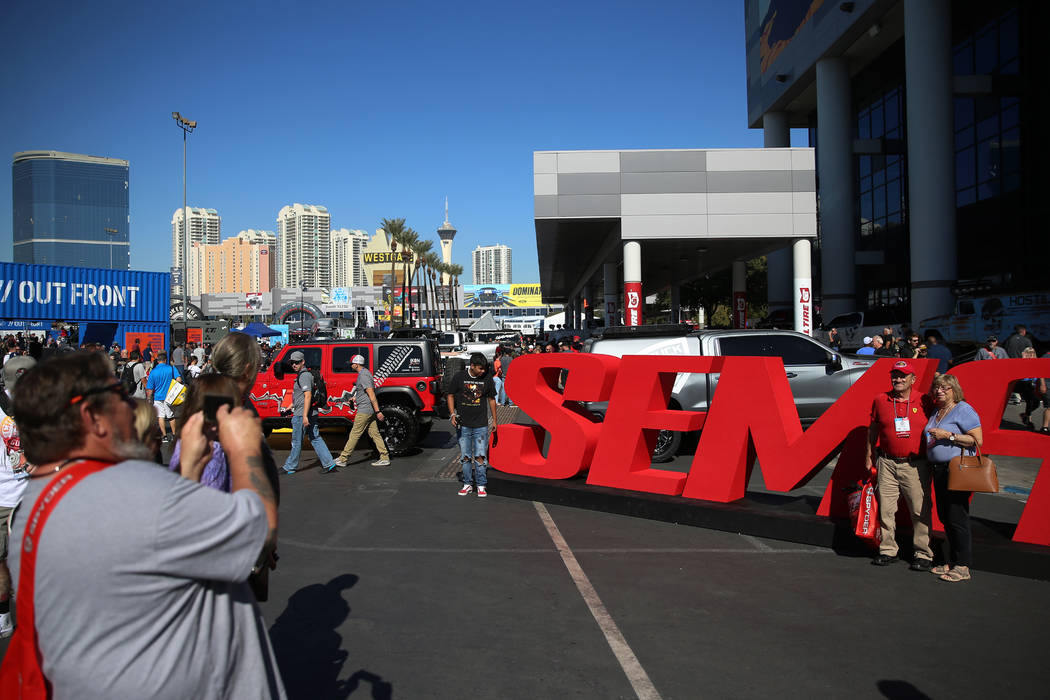 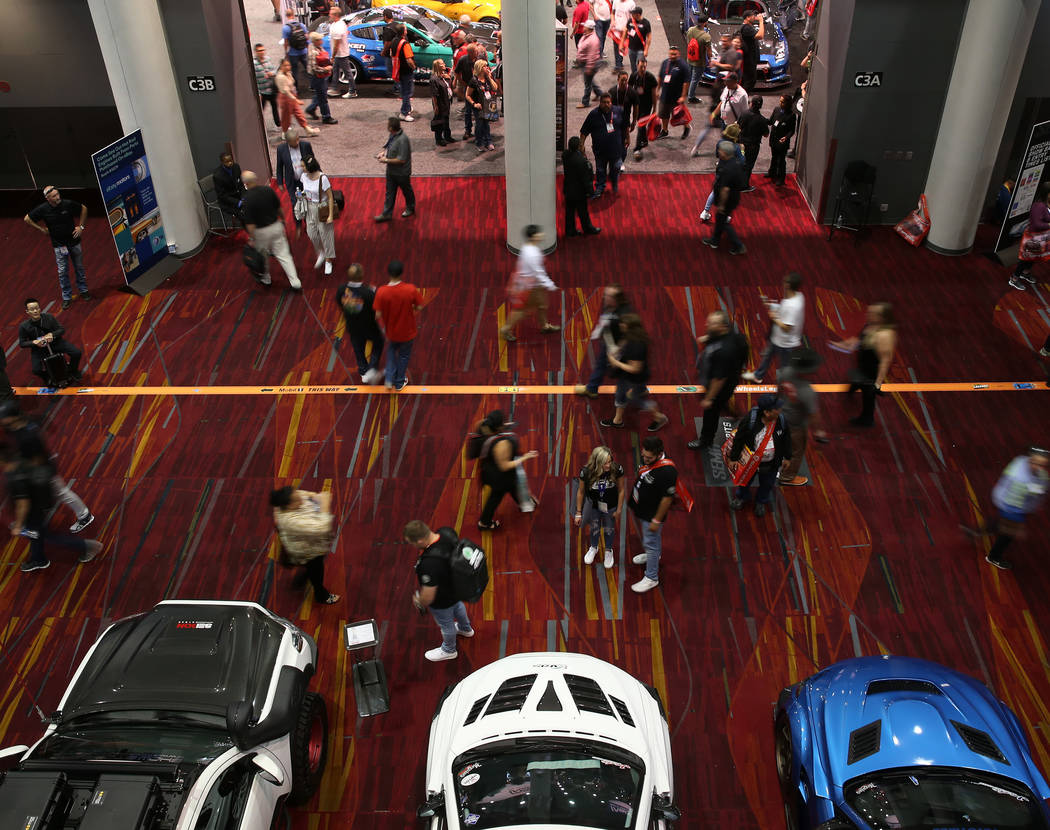 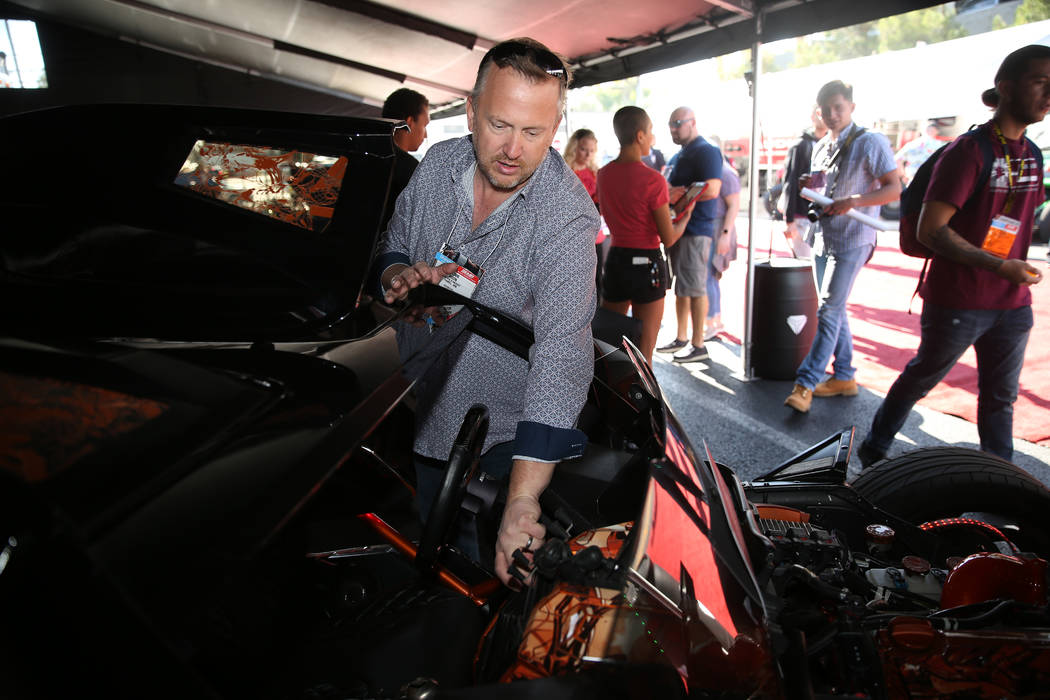 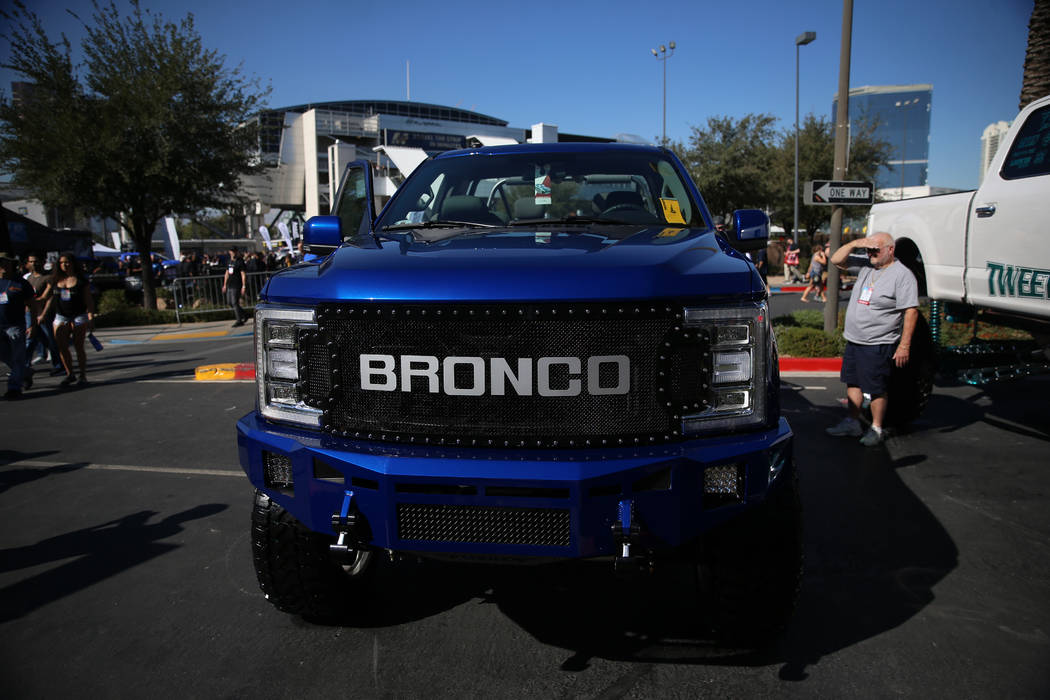 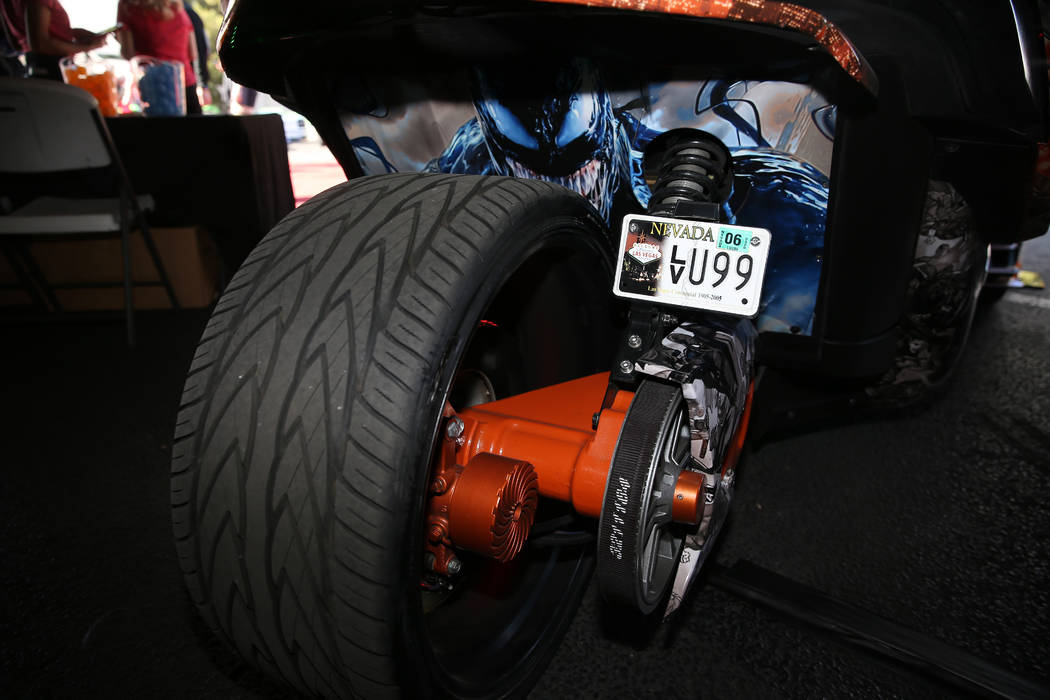 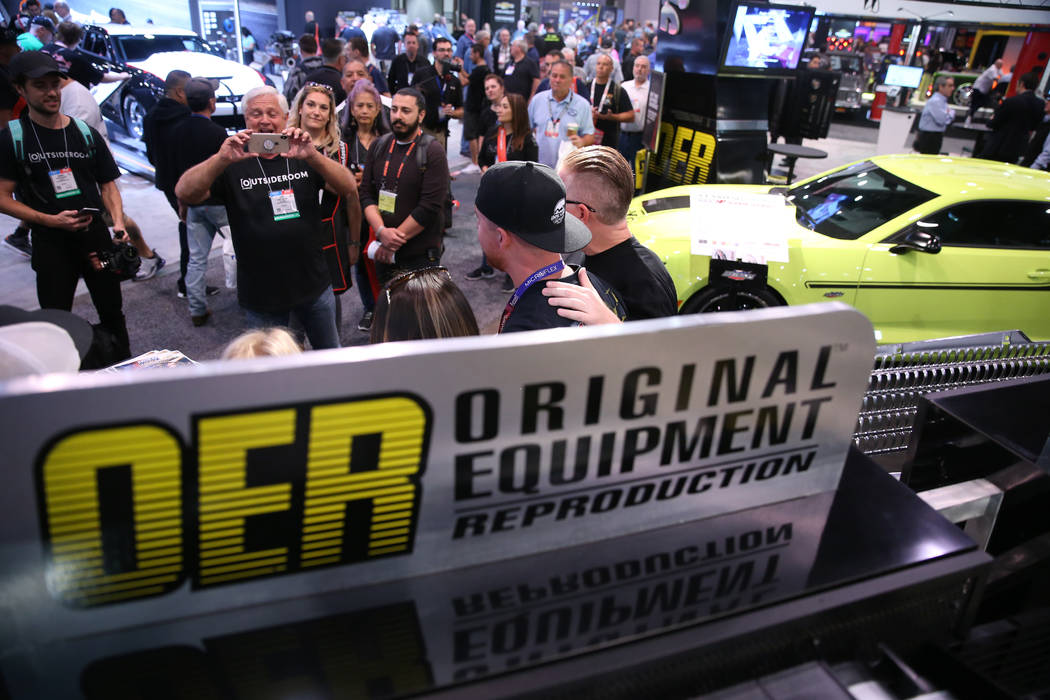 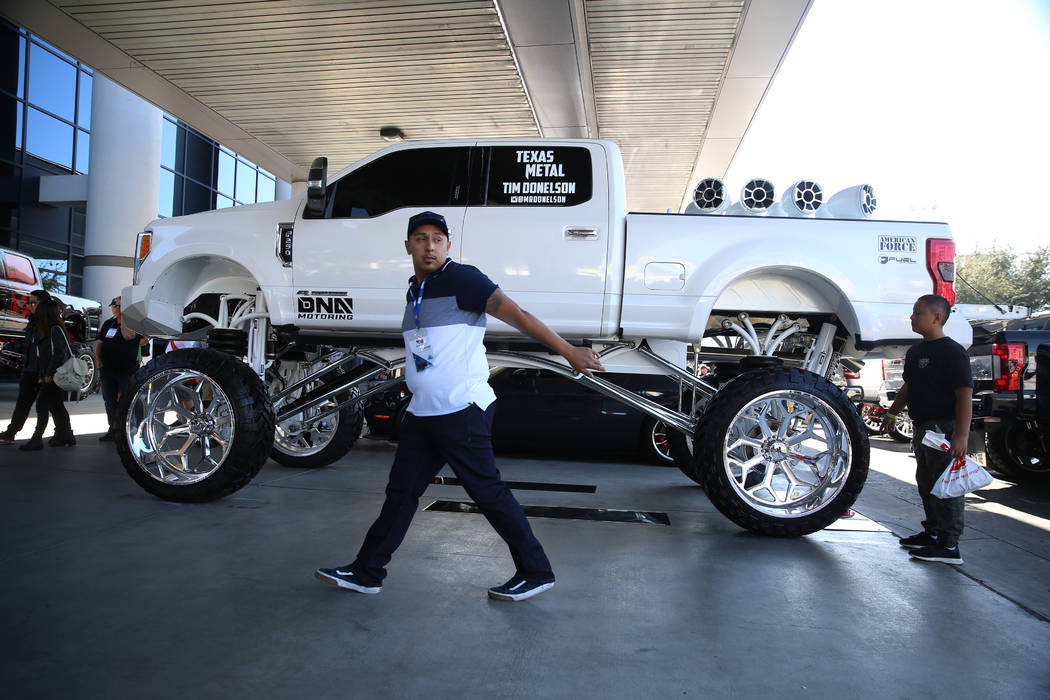 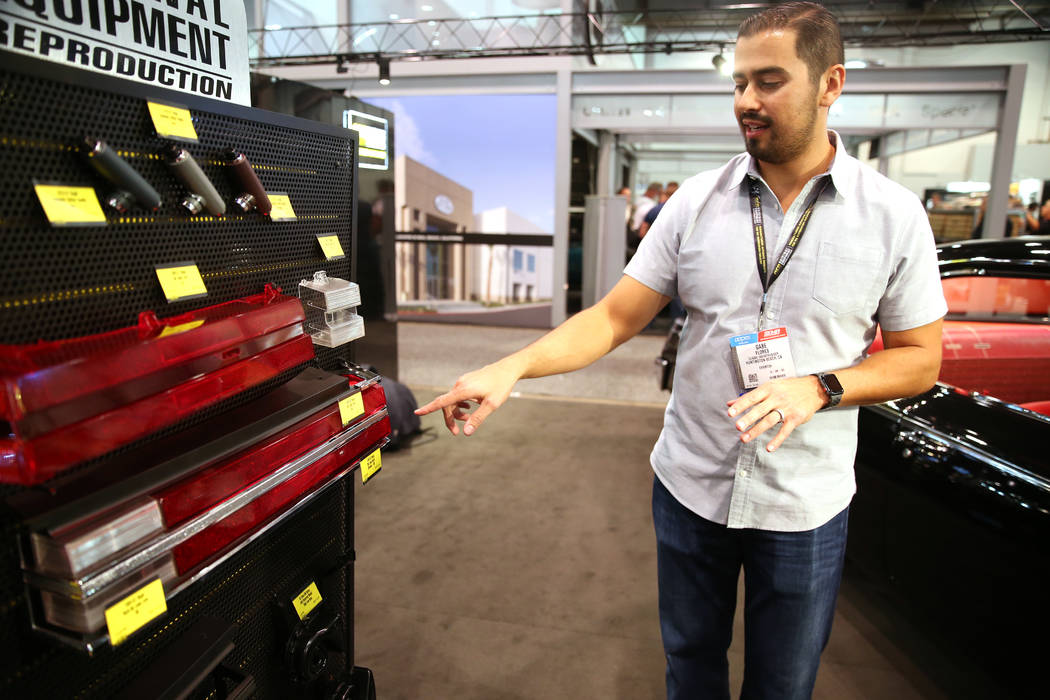 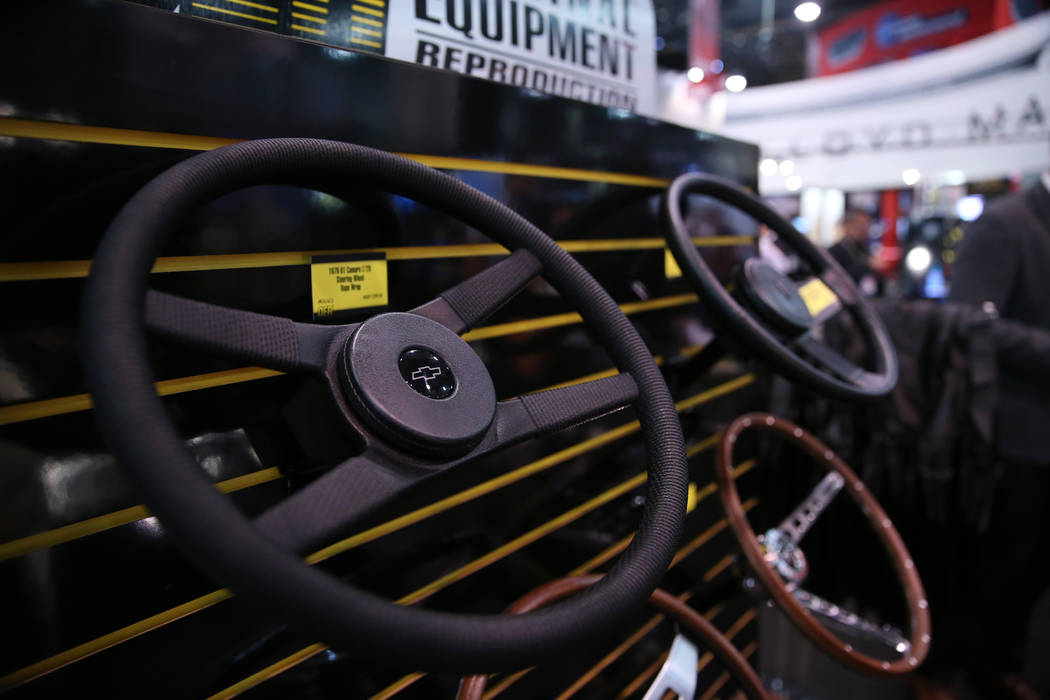 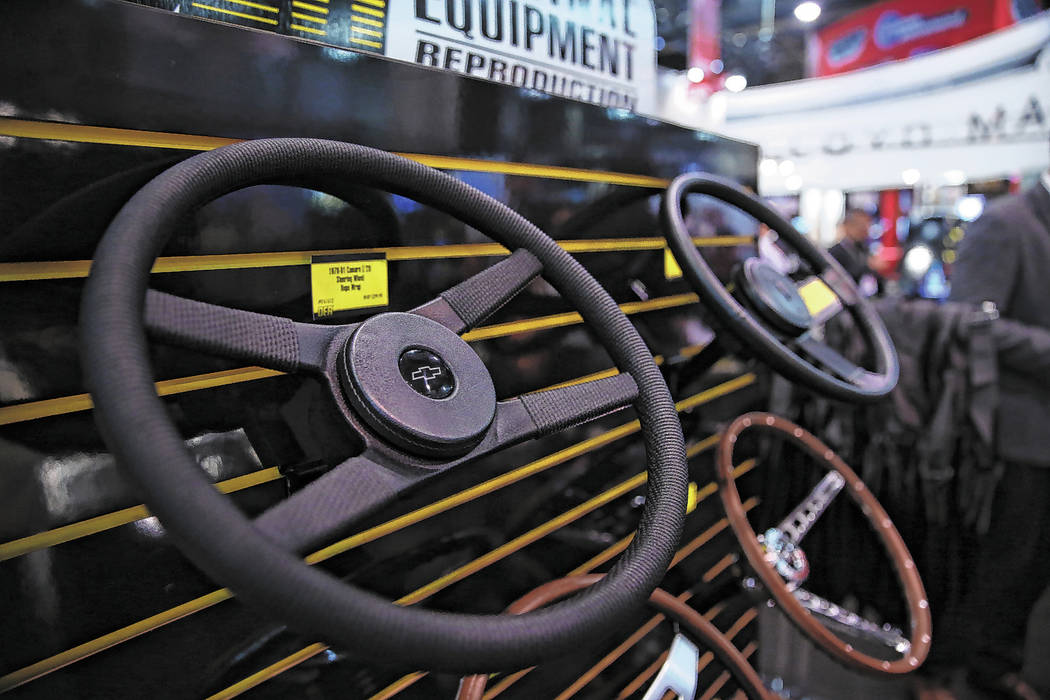 “I mean, I’m a car guy and I didn’t know what to expect, (but) when I walked around there’s a lot of stuff to take in,” Pritchett said.

The first-time attendee was one of several thousand people at the SEMA show, underway at Las Vegas Convention Center through Friday.

The annual convention, not open to the public, caters to professionals in the automotive aftermarket industry and features more than 2,400 exhibitors and 70,000 buyers, according to the trade association.

But one event is offered for the public at Friday’s SEMA Ignited. The evening festival allows attendees to see hundreds of custom cars and will be at the Las Vegas Convention Center’s Platinum Parking Lot at the southeast corner of Swenson Street and Desert Inn Road, east of the center’s South Hall.

“The show is really about companies that manufacture product and distribute it, whether it’s wholesale or retail,” Classic Industries CEO Jeff Leonard said. “It really keeps you up to date with what’s going on (in the industry).”

A SEMA exhibitor since 1985, the Huntington Beach, California, company sells and manufacturers more than 205,000 restoration parts and accessories for classic vehicles made by manufacturers such as General Motors and Ford .

Leonard said the trade show has come a long way, especially for those in the restoration business.

“When we displayed, there was nobody selling the type of products that we offered,” he said. “It was mostly wheels, and headers, racing items — that type of thing … but over a period of time other people in our industry slowly started coming. “There’s probably hundreds of companies in the restoration industry, at least 150, that display every year now, and we have a whole section. It’s nice to see.”

Pritchett was there to show off his custom three-wheeled Polaris Slingshot vehicle. He was one of four Slingshot owners selected to showcase their tricked-out motorcycles, with SEMA attendees getting to vote on their favorite one by dropping a ping-pong ball into a clear case near the car of their choice .

Pritchett, a 30-year Army veteran, said it took him a little over a year to customize his blue Slingshot, but he’s still working on it. “It’s always something. You try to say you’re done, but as soon as you see something new, you change it.”

That’s also been the case for Las Vegas residents Cynthia and Ronn Moon, who were exhibiting their Slingshot vehicle for the first time.

“It’s never-ending,” Cynthia said. “There’s a few things that were fabricated a little different than what you’ll see on the stock Slingshot. We drive it everywhere and it’s a blast.”

Meanwhile, supercharger manufacturer ProCharger had a not-so-shiny car inside its booth, but it drew quite a crowd.

That is because the vehicle — a roughly $250,000 custom-built Dodge Challenger — was stolen just before it was to be displayed on the trade show floor but then recovered by the Nevada Highway Patrol.

Williston, Vermont-based auto shop Quintin Brothers Auto and Performance spent about a year customizing the Challenger for their clientwith features including a carbon fiber fender, ProCharger supercharger, a carbon-fiber wide body kit and wheels worth an estimated $12,000.

“It was shipped from a dealership to our shop and the customer never saw the car,” said Quintin Brothers co-owner Pete Quintin. “He was (planning to) come Thursday.”

Quintin said his team planned to take the damaged car back to its shop, but ProCharger agreed to still display the vehicle “because it’s a good story.”

“It’s a hit — I hate to say it — in more ways than one,” he said, adding that the car will be rebuilt for the client after the show.