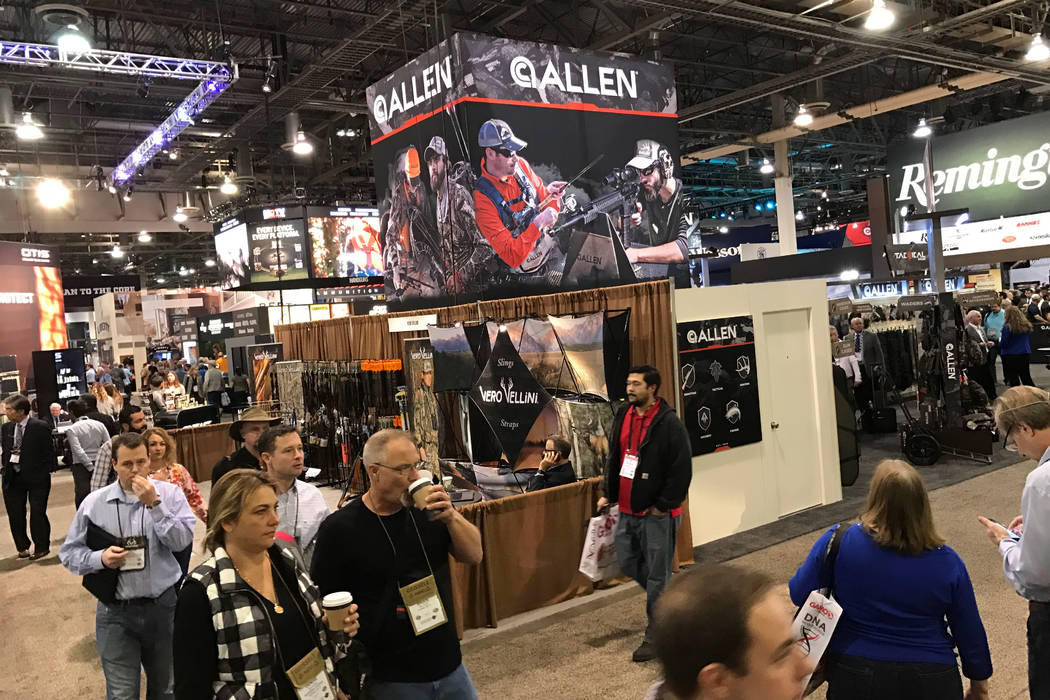 Attendees wander miles of aisles at the 2017 Shooting Hunting and Outdoor Trade (SHOT) Show in Las Vegas. This is the trade show where manufacturers and vendors meet to decide what customers will find on store shelves during the coming year. The show is not open to the public. (Doug Nielsen)

Gun manufacturers will be aiming for big sales this week as they storm into Las Vegas for the industry’s biggest trade show.

The Shooting, Hunting &Outdoor Trade Show, better known as the SHOT Show, will draw more than 58,000 industry professionals to the Sands Expo and Convention Center from Tuesday through Friday.

The four-day trade show is the industry’s business-to-business equivalent of Black Friday, as manufacturers and wholesalers pen multimillion-dollar deals with retailers and law enforcement agencies for firearms, ammunition and accessories such as holsters and scopes.

The show is also a bonanza for Las Vegas as attendees spend nearly $90 million on hotels, food, drink and souvenirs, said Chris Dolnack, senior vice president and chief marketing officer for the National Shooting Sports Foundation, which runs the show.

Local gun ranges see business pick up during the week. German-based manufacturer Sig Sauer will host as many as 2,000 people Monday at the Rifle Pistol Center at the Clark County Shooting Complex. About 800 people are expected to visit the Boulder Rifle and Pistol Club on Monday to test the latest products from more 200 manufacturers. The Metropolitan Police Department also will host a test shooting event that day. About 1,000 law enforcement officials attended the Metro event last year.

SHOT Show attendance though will be slightly down from the 60,000 visitors last year as industry growth stagnates after years of robust expansion driven in part by concerns over stricter legislation. And the show has tightened registration requirements to ensure attendees are buyers or sellers representing industry businesses, Dolnack said.

Firearms is an $8 billion industry in the United States.

Female attendance has grown in recent years as as more women take up shooting, Dolnack said. Women account for 11 percent of SHOT Show attendees, he said.

The Clark County Shooting Complex has seen “a lot more women” coming to the range over the past few years, said Senior Management Analyst Steve Carmichael, who will be attending the show.

The SHOT Show covers nearly 700,000 square feet of space at Sands — the size of about 12 football fields — and the exhibitor aisles stretch roughly 12 miles, Dolnack said. Sturm, Ruger &Co.; Remington Arms Co.; Smith &Wesson and Sig Sauer will be among the 2,400 exhibitors.

The show will feature more than 7 million pounds of goods, including 15,000 firearms from handguns, shotguns to semiautomatic rifles. Neither firing pins nor live ammo are allowed on the floor.

Las Vegas gun shop owners will be among attendees perusing the firearms on display. But the seven local companies the Review-Journal contacted either declined to comment on the show or did not return calls.

A quarter of the exhibition space at SHOT Show is dedicated to law enforcement, the fastest-growing show segment, Dolnack said.

Law enforcement officials account for about 15 percent of attendees and include members of police departments; the Federal Bureau of Investigation; Bureau of Alcohol, Tobacco, Firearms and Explosives; and Department of Homeland Security.

Officers in attendance are either responsible for armament and equipment purchases or training, Dolnack said. The show features a law enforcement education program that instructs officers about best practices and the latest technology. The program includes seminars on active-shooter situations, the use of drones and optics and virtual reality training.

“Most of the people that are attending these seminars are trainers, and they will take the knowledge that they gain here and share it in their academies,” Dolnack said.

The show certainly won’t be all guns and ammo. Companies have worked to harness the latest Silicon Valley technology to bring innovative products to all industries.

Meggitt Training Systems and Virtra Systems will show off their virtual reality simulator used by police around the country. The systems consist of screens that wrap as much as 300 degrees around an officer and present a life-threatening situation that must be resolved.

Other innovations at the show aim to enhance safety and accuracy during shooting range practice. The Safeshoot device immediately alerts a shooter when another device holder is in the line of fire at a range of 900 yards.

Software and app developers will show off tools to measure wind speed and calculate trajectories. The innovations come as range shooting — especially long-range shooting — grows in popularity around the United States. 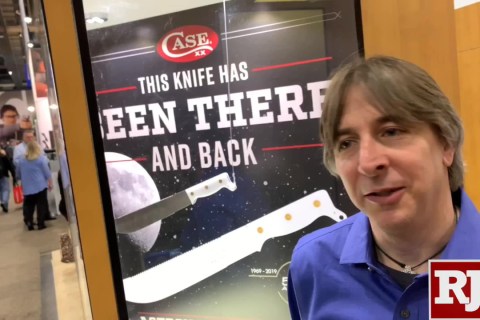