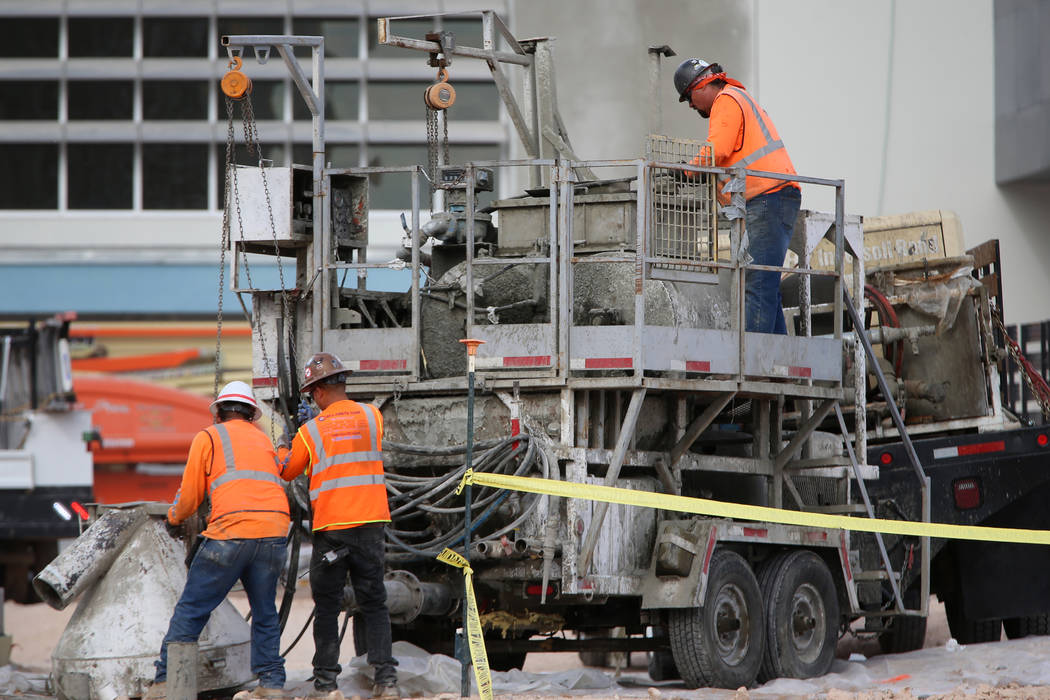 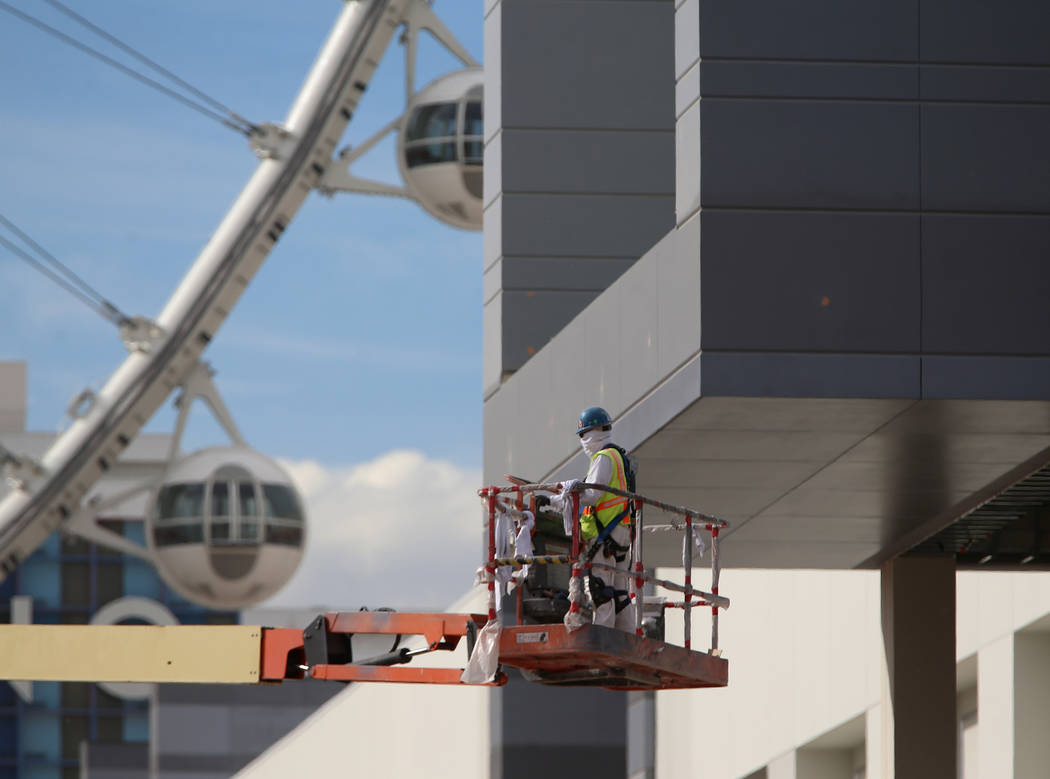 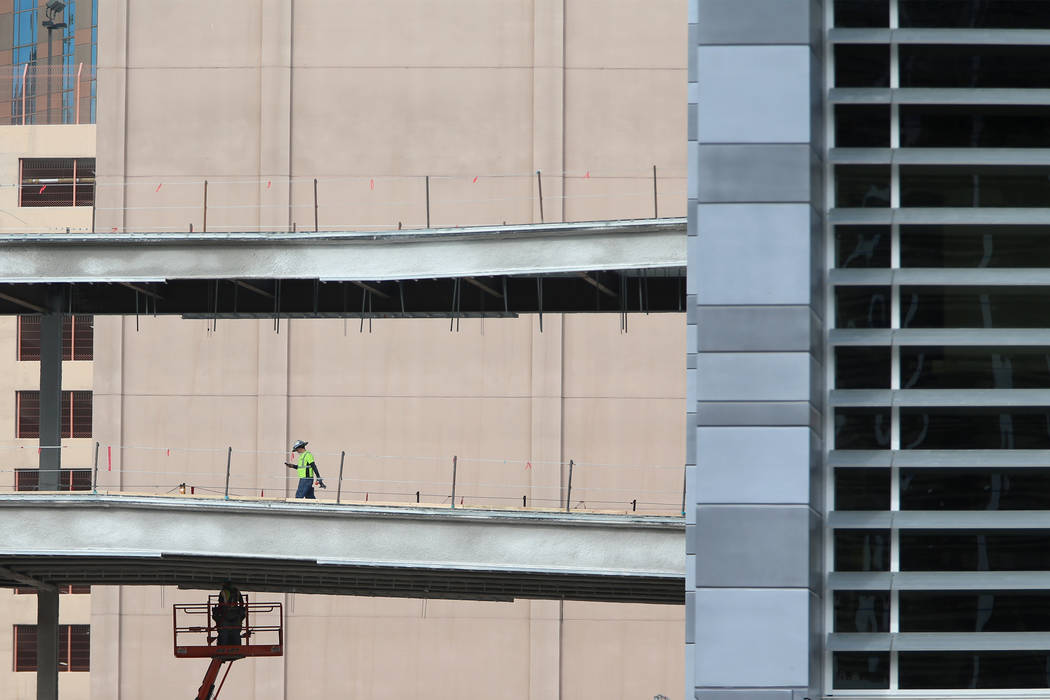 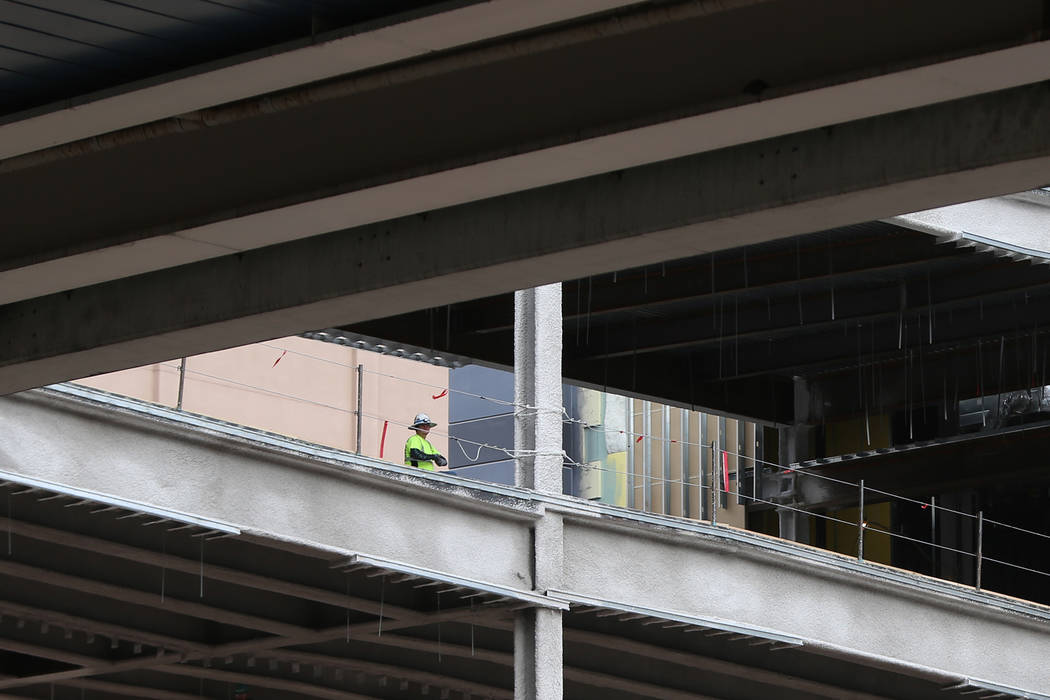 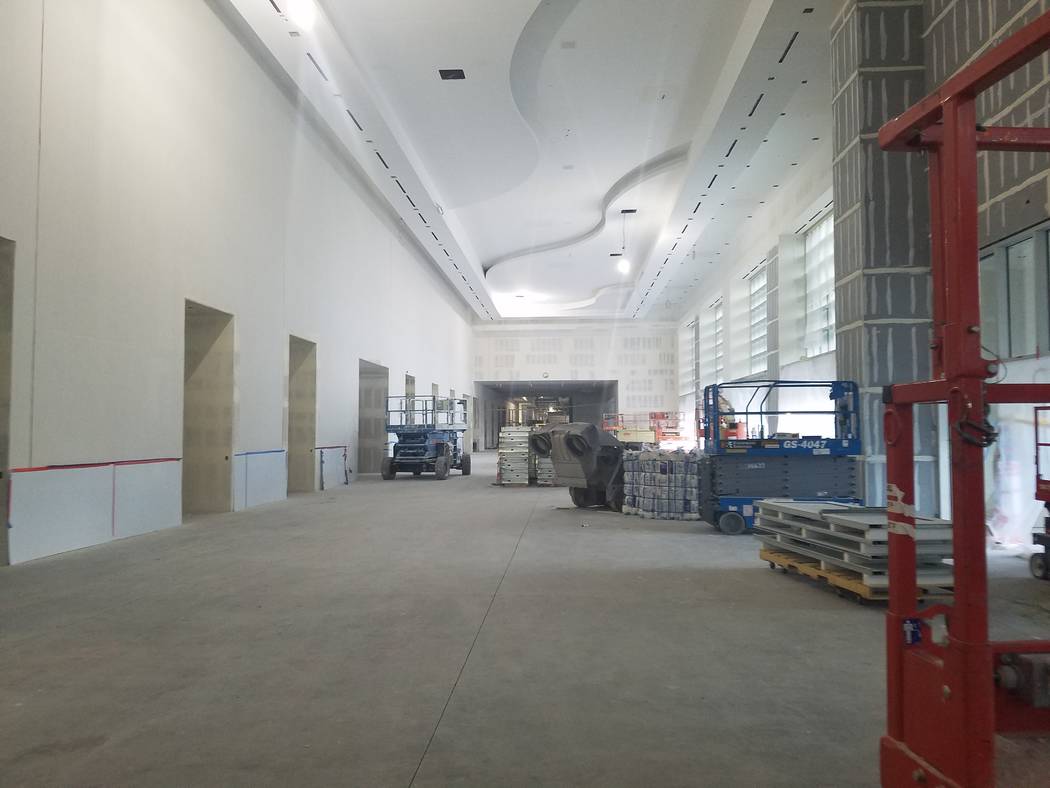 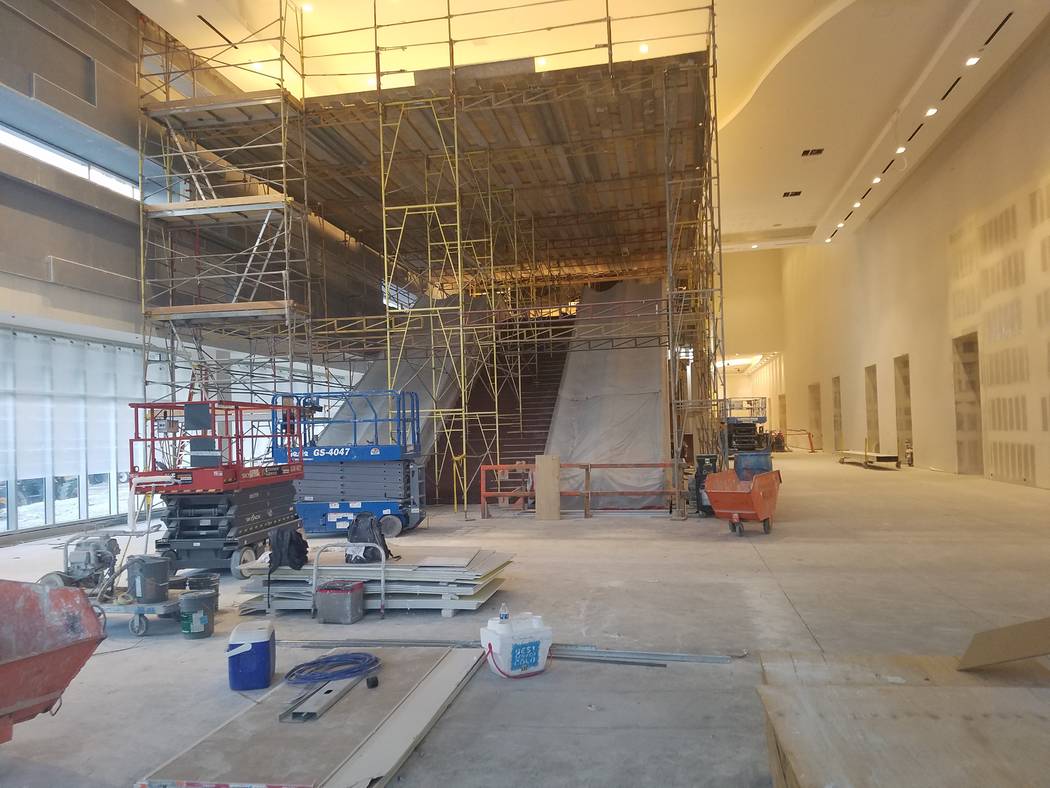 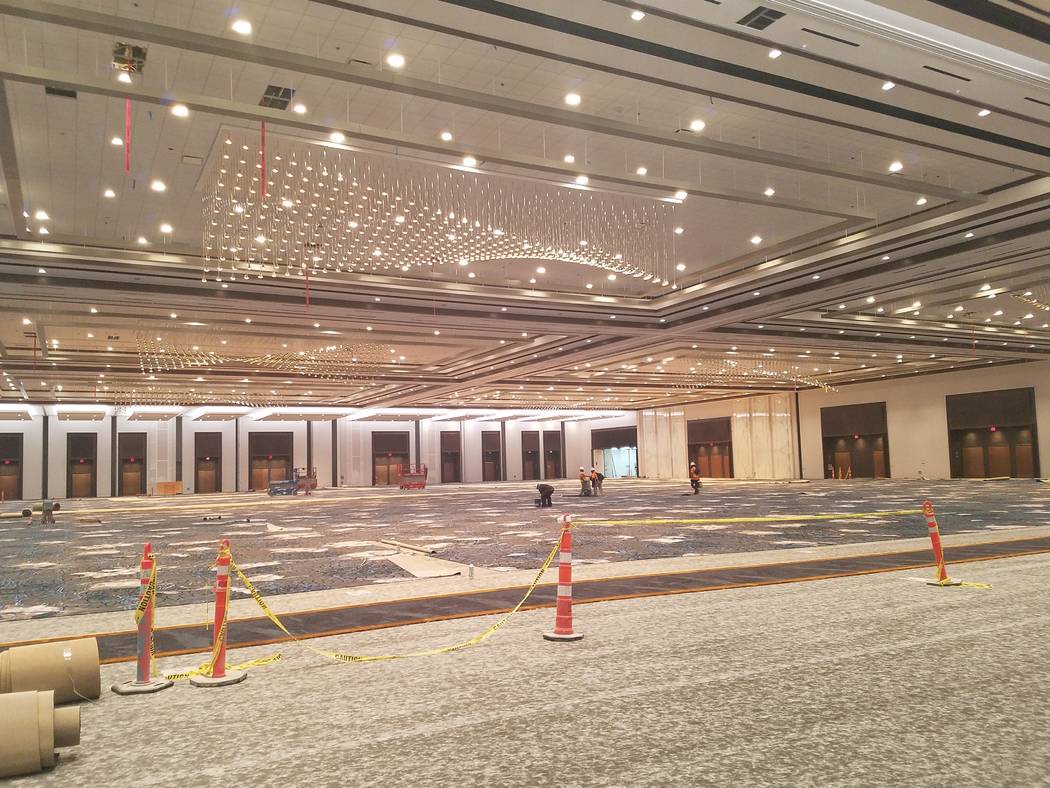 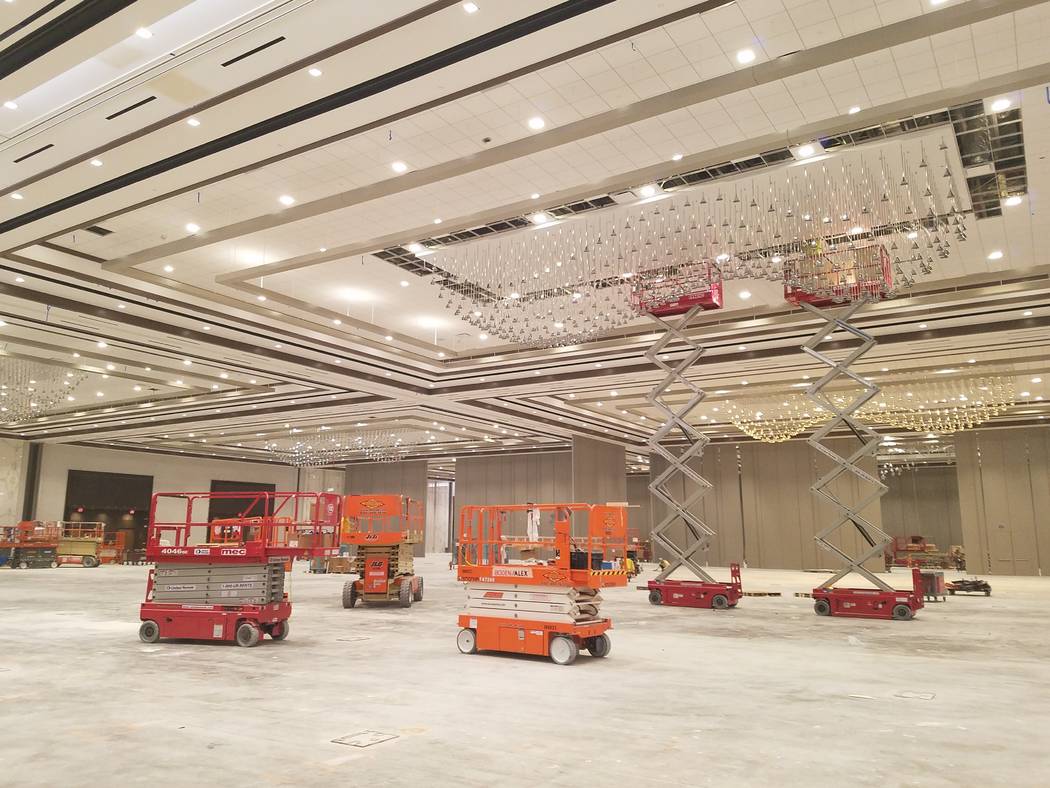 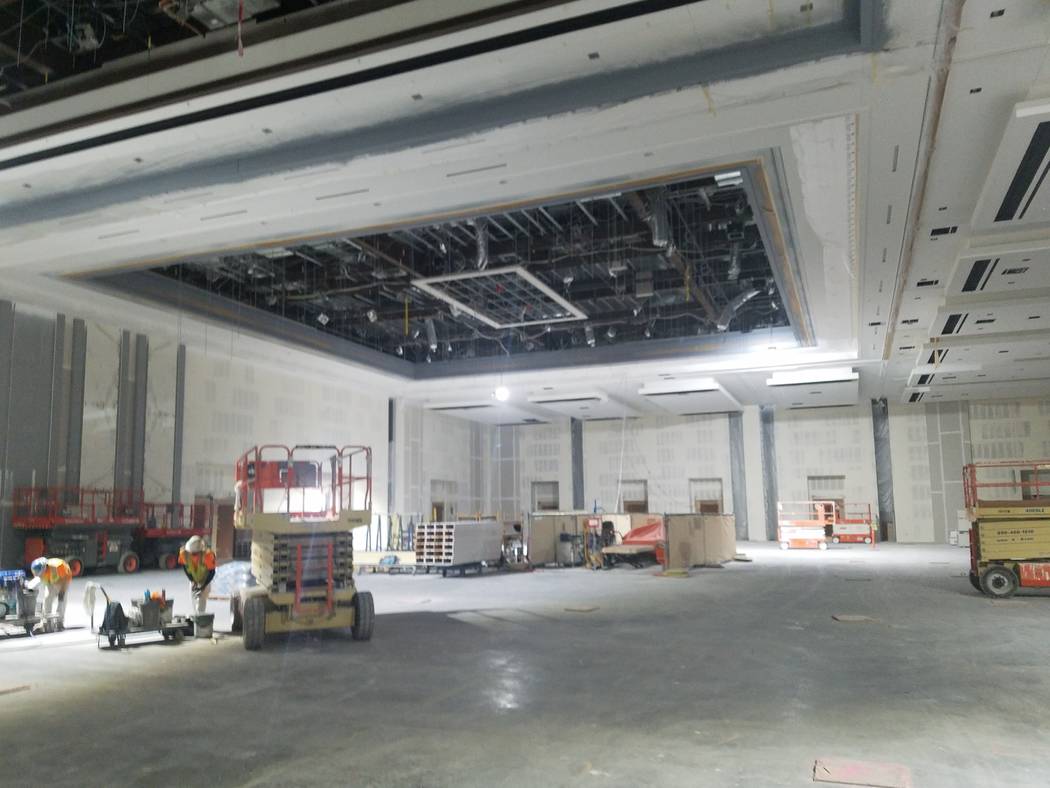 The first thing that jumps out at you as you walk through Caesars Forum, the $375 million, 550,000-square-foot convention facility being built by Caesars Entertainment Corp. near The Linq Hotel, is how enormous it is.

The enormity of the facility is highlighted with two 110,000-square-foot ballrooms that are the largest pillarless ballrooms in the world, said Karyn Steenkamp, vice president of design and construction for Caesars.

Two 40,000-square-foot junior ballrooms round out the big space and each of the four ballrooms is flexibly divisible, thanks to a 2.1-mile network of soundproof airwalls.

The airwalls have 2,500 individual pieces and, while sections weigh more than a ton, one person can move them thanks to a stainless steel ball bearing system. It was the largest airwall order ever placed with the supplier.

A total 32,000 yards of concrete are already in place with more to be poured as the Forum’s outdoor space is completed.

Trade journalists attending Autodesk University, a four-day technology conference on construction, manufacturing, architecture and engineering, got a first look at Caesars’ new facility, set to open in March and, according to sources, the expected centerpiece of April’s National Football League draft festivities.

Caesars Forum, inspired by the Roman Forum of ancient Rome, already has booked more than $400 million in business, including hotel room nights at 8,000 nearby rooms, directly attributed to the new facility, said Ashley Lowe, director of sales for Caesars.

The project is 70 percent complete and general contractor Penta Building Group has stepped up with around-the-clock 10-hour shifts to make sure the project is completed on time.

Construction managers condensed what was planned to be a two-year construction timeline into 18 months.

“Caesars asked us to step on the gas a little bit, because they have a party they want to have here in March,” Steve Jones, vice president of operations for Penta, told about 25 writers who took the tour Monday.

The 27-acre site on which Caesars Forum is built once held 22 parcels of aging residential properties acquired by Caesars predecessor Harrah’s Entertainment years ago.

The building will be connected to Caesars’ hotel properties at The Linq Hotel and Harrah’s via a climate-controlled elevated walkway that also passes near the Harrah’s and The Linq Las Vegas Monorail station, giving the convention area additional offsite access.

The four ballrooms are color-schemed for the four seasons and each have a name — Forum and Summit for the big ones and Alliance and Academy for the smaller two.

“It feels large, but it also feels intimate,” said Chelsea Lavell, director of interior design for KGA Design, which was contracted for the interior work.

A 20,000-square-foot kitchen serves the meeting space with cold and hot kitchens and a bakery.

Along the southern periphery of Caesars Forum are six boardrooms, three with glass than can be frosted for privacy with the flip of a switch. Four of the boardrooms have direct access to the 10,000-square-foot exterior space that will be used for seasonal outdoor and evening events.

The outdoor space sits at the foot of the High Roller observation wheel and opens up to the Linq Promenade.

Lavell said her team aimed to maximize natural light on the project and the interiors abound with natural stone and wood finishes.

Each ballroom has a white lighting control system to adjust the mood of the room. Lavell said multiple lighting fixtures in the large ballrooms are 42 feet long, 16 feet wide and 10 feet tall.

A massive LED video screen is planned at the main pedestrian entrance to the building.

The Leed Silver-certified building will be 44 percent more water efficient than a conventional building, resulting in saving an estimated 4.6 million gallons of water per year.

The eastern half of the building will have underground space — a single-level parking garage, storage areas, back-of-the-house facilities and the building’s physical plant. Toward the rear are loading docks with a total of nine bays with two entrances capable of accommodating semi-truck trailers. 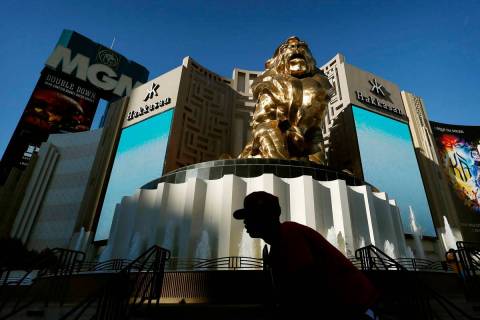 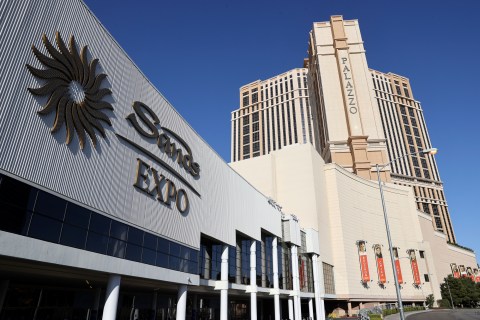 The Venetian resort is using Health Pass technology to expedite the return of conventions and trade shows to Las Vegas. Health Pass works like Clear found at U.S. airports. 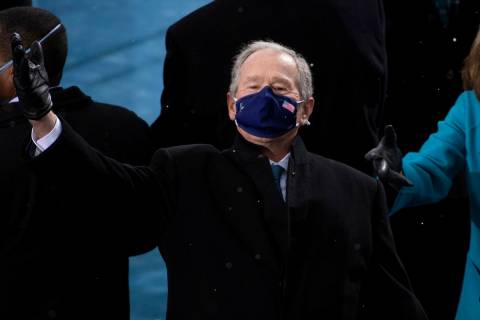 George W. Bush will take part in the Las Vegas convention Excell 2021, put on by Carson Group, this October. 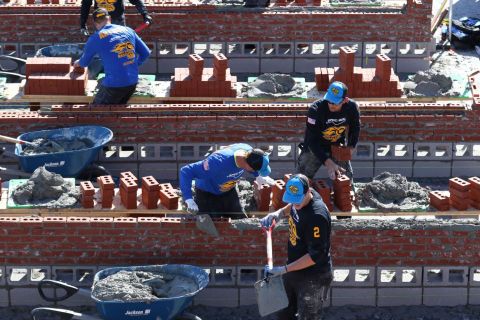 World of Concrete approved to come back to Las Vegas
By Richard N. Velotta / RJ

Las Vegas Convention and Visitors Authority President and CEO Steve Hill has pointed to World of Concrete being the first major trade show event to return to the city. 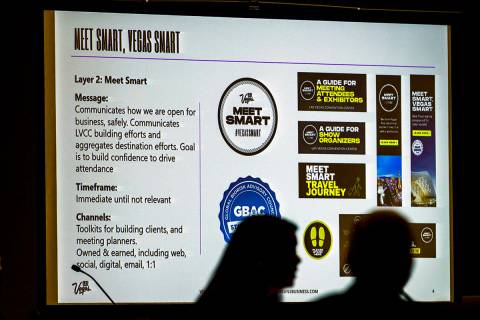 The Las Vegas Convention and Visitors Authority is taking an unorthodox path to let traveling social media influencers tell their thousands of followers about the good times they had in Las Vegas. 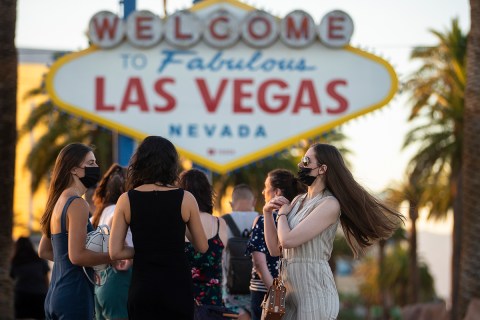 Social media influencers are expected to be in Las Vegas next weekend to get a look at how the city is readying for anticipated pent-up demand for the entertainment and activities it is famous for.