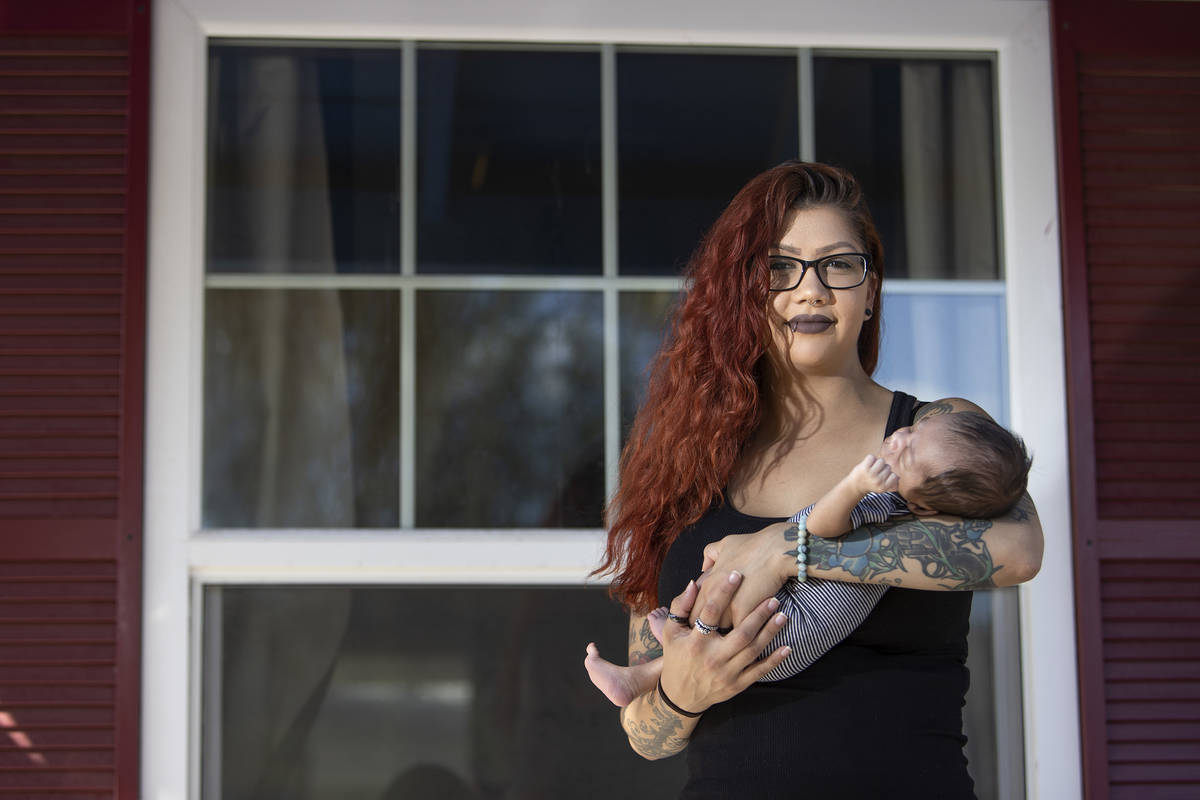 Former Nacho Daddy employee Ariel Gilstrap poses for a portrait with her newborn son, Kane Gilstrap, outside their home on Wednesday, May 27, 2020 in Las Vegas. After being laid off from Nacho Daddy in March, Gilstrap was 32 weeks pregnant and left without health insurance when Kane needed surgery immediately upon birth. She's not sure how they'll pay when the hospital bills arrive. (Ellen Schmidt/Las Vegas Review-Journal) 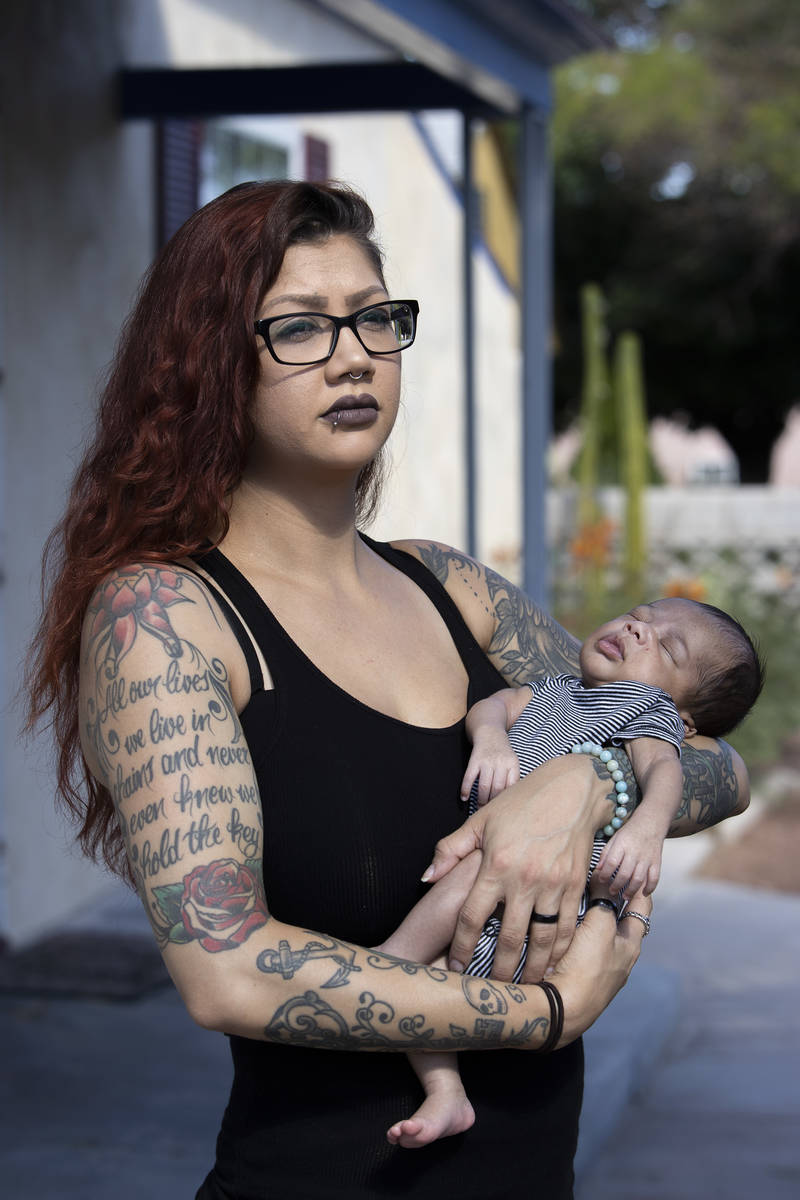 Former Nacho Daddy employee Ariel Gilstrap poses for a portrait with her newborn son, Kane Gilstrap, outside their home on Wednesday, May 27, 2020 in Las Vegas. After being laid off from Nacho Daddy in March, Gilstrap was 32 weeks pregnant and left without health insurance when Kane needed surgery immediately upon birth. She's not sure how they'll pay when the hospital bills arrive. (Ellen Schmidt/Las Vegas Review-Journal)

Thirty-two weeks pregnant and suddenly out of work.

By March 18, the day Ariel Gilstrap was laid off from her bartending job at Nacho Daddy, she already knew her son would need surgery upon birth. The previous day, her husband was furloughed from his job at a bar downtown.

Now they have a baby boy and are waiting to discover not only the cost of his early, cesarean section delivery and subsequent stay in the neonatal intensive care unit, but also how they will pay up.

“We’re gonna have to come up with the money, because we don’t have it right now,” Gilstrap said May 20.

In a country where health insurance is heavily tied with employment, the COVID-19 pandemic and related job losses mean Gilstrap and others face the daunting prospect of trying to pay their medical bills without stable insurance or their regular income. There are options for people who find themselves unexpectedly out of work, but they are limited and can pose financial or temporal challenges of their own.

How many Nevadans are affected?

Nevada’s unemployment rate reached a record 28.2 percent in April, according to the U.S. Department of Labor, but data is not available on how many lost their health insurance due to shutdown-related job loss.

The Nevada Division of Insurance didn’t have a count as of Tuesday on how many people have lost their health insurance during the pandemic.

The Silver State Health Insurance Exchange, the state agency that operates Nevada’s health insurance marketplace, opened a special limited enrollment period that lasted from March 17 through May 15. The insurance exchange reported 6,017 Nevadans signed up through the exchange, though there was no provided distinction indicating those signing up for insurance because of COVID-19 job losses.

Some furloughed employees may retain their coverage, but quantifiable data is not yet available, according to Sara Collins, vice president of health care coverage and access at New York City-based health care research foundation The Commonwealth Fund.

Furloughed Culinary union members enrolled in the union plan have their health benefits through June 30, according to Culinary Local 226 fact sheets. Nevada’s largest private employer, MGM Resorts International, extended health insurance benefits through Aug. 31, after which furloughs could turn into layoffs. MGM had roughly 70,000 part-time and full-time domestic employees as of Dec. 31, according to company regulatory filings.

Boyd Gaming Corp., with about 10,000 Nevada employees as of April, promised to cover all insurance premiums for furloughed workers through June 30 or their return to work, whichever comes first. Caesars Entertainment Corp. is doing the same.

Those who have lost their employer-sponsored health insurance may have options, but many just don’t know it, said Sara Collins, with The Commonwealth Fund.

Nevada residents living 138 percent below the poverty line may be eligible for help through Medicaid.

People have 30 days from the time they lost their coverage to start the enrollment process by visiting healthcare.gov and clicking on “See if I can enroll,” Collins said, noting that undocumented people aren’t eligible for government programs or enrollment via the health care law.

While Nevada opened its own special enrollment period, the federal government has not.

“They had the power to do that and chose not to,” Collins said.

Collins said the federal government has “reduced their advertising and marketing practically to zero” since 2016 and could’ve done more outreach to let people know the 30-day period was open to them.

‘We make too much’

Gilstrap’s obstetrician examined her incision and told her she couldn’t work again until July 6.

She and her husband, 32, are surviving on unemployment checks. He was furloughed from his security job at Commonwealth, 525 Fremont St., the day before Gilstrap lost hers — all around the same time they paid $3,000 in medical bills.

“I definitely cried many times after getting let go,” Gilstrap said.

The Gilstrap parents have been on COBRA health insurance since April because they don’t qualify for Medicaid — “We make too much” in unemployment checks at a combined $780 per month, she said.

However, Gilstrap said, the monthly COBRA payments of $707 eat up nearly all of their current income, leaving no room for rent, groceries, two car payments or much of anything else.

In June, Kane gets on Nevada Checkup and his parents get off the costly Consolidated Omnibus Budget Reconciliation Act program. Gilstrap said she and her husband will likely have to figure out their insurance situation once they return to work.

She’s afraid to leave the house in the meantime and run the risk of introducing the coronavirus to her home.

His NICU bills haven’t yet arrived. She doesn’t know what they’re going to look like.

“But what are you gonna do?” she said. “I’m just gonna have to make it work.”