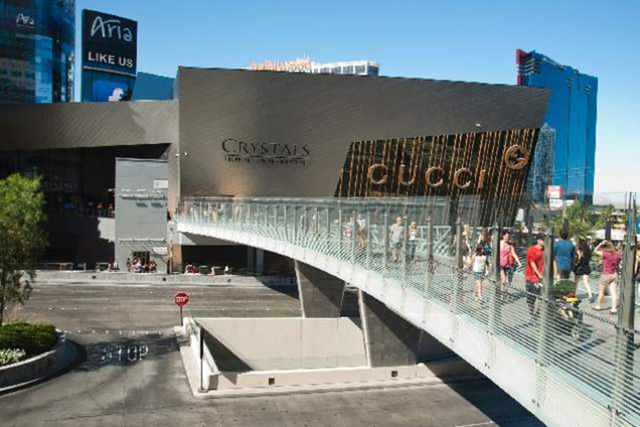 The Shops at Crystals for $1.13 billion. (Las Vegas Review-Journal)

Crystals is part of CityCenter, which MGM owns and operates through a 50-50 joint venture with Dubai World.

MGM Resorts spokesman Clark Dumont said the company had “no comment to offer” on the matter.

“Net-net, we think the transaction, if completed, is a distinct positive for MGM,” Santarelli said.

Other Wall Street analysts picked up on the report and had similar commentary about the possible sale. Shares of MGM closed up 34 cents or 1.71 percent to finish the day at $20.27 on the New York Stock Exchange.

“We view the transaction as consistent with MGM’s stated intention to monetize assets, when attractive, and consider the multiple fair given the property is relatively new,” Greff said.

Last August, he said MGM and its CityCenter partners were seeking seeking ways to generate more cash from the 67-acre complex.

“We believe that not only it’s more valuable today than it was even last quarter, but we believe with the growth plan it would be more valuable still going forward,” Murren said.

He said the company was looking at expanding Crystals, using the space created by the demolition of the unfinished Harmon tower.