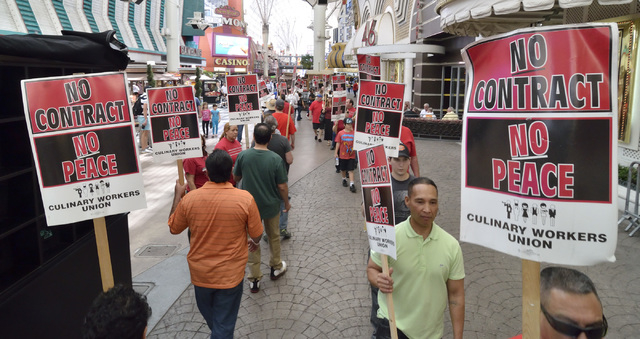 Culinary and Bartenders Union supporters picket outside of the Golden Nugget hotel-casino at 129 Fremont St. in downtown Las Vegas on Saturday, April 12, 2014. The unions, which aren't officially on strike, staged the "informational picket" at several downtown casinos after a year-and-a-half of stalled negotiations on a new contract. (Bill Hughes/Las Vegas Review-Journal)

The Culinary and Bartenders unions reached a five-year contract agreement with the Golden Nugget on Wednesday, the first settlement after more than a year-and-a-half of negotiations with several downtown casinos.

As recently as Saturday, two weeks after union members voted to authorize a strike, workers formed an informational picket against 10 Fremont Street casinos that included the Golden Nugget. The unions represent more than 1,200 Golden Nugget employees.

At the heart of the deal are workers health benefits, for which they pay no premium.

“As a single father, having a union contract ensures that I can take care of my son, and that means so much to me,” Burkey Rothenberger, a master cook at the Golden Nugget, said in a statement released by Culinary Local 226. “I will do whatever it takes to provide for my family.”

Earlier this year, the unions agreed to contracts with MGM Resorts, Caesars Entertainment, and other Strip properties.

Whether a downtown strike could still occur remains in question. Thousands more workers whose contracts have yet to be renewed have signed up for strike benefits and strike picket shifts.

“I am pleased that we have reached an agreement with the Golden Nugget,” Geoconda Arguello-Kline, secretary-treasurer of the Culinary Union, said int the statement. “This contract is a fair settlement which will continue to protect the health benefits, wages, and future of union families.”