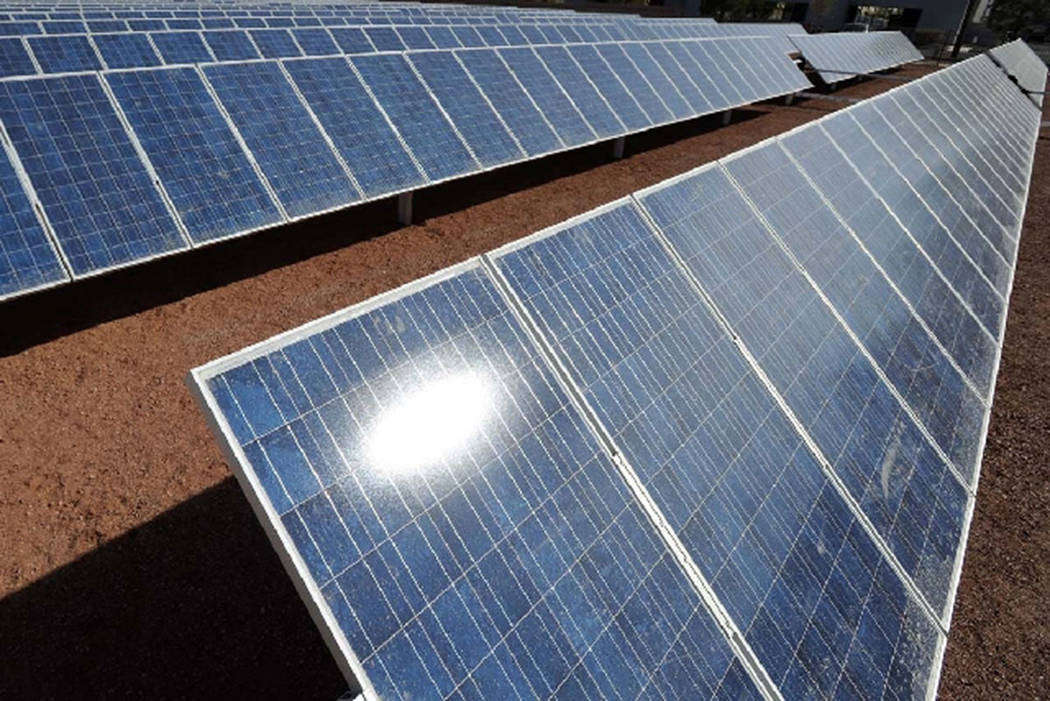 The Bureau of Land Management will have public meetings regarding the proposed Gemini Solar Project, which, if approved, will be built along Interstate 15 north of Las Vegas. (Las Vegas Review-Journal file)

The Bureau of Land Management has announced details on a pair of public meetings in which input will be accepted on the proposed Gemini Solar Project, which would rank as the largest solar facility in the county if approved.

Public comment on the project, which would be built east of Interstate 15 along the road to Valley of Fire State Park, will be accepted during the last hour of both sessions after presentations.

In early June, BLM released its draft environmental impact statement on the project, which is slated to use 7,100 acres of photovoltaic panels to generate up to 690 megawatts of electricity. Plans include some on-site battery storage that would allow the facility, 30 miles northeast of Las Vegas, to continue delivering power after the sun goes down.

Gemini is a joint venture by Australia’s Quinbrook Infrastructure Partners and California-based Arevia Power, which plan to develop 440 megawatts of solar capacity for use in Nevada in the first phase of the planned development.

An additional 250 megawatts of generating capacity would be added in the second phase, with the power to be sold only in Nevada.

“The proposed Gemini Solar Project would represent a significant increase in renewable energy capacity for Nevada and the West,” Tim Smith, Southern Nevada district manager for the BLM, has said. “We look forward to receiving public input as we continue to evaluate this project.”

Some conservationists are already pushing back against the proposed project, saying the development is too large and too close to wilderness and other fragile areas to avoid harming the environment. Others have raised concerns about clearing swaths of desert for utility-scale arrays instead of placing solar panels on rooftops or in already-disturbed areas.

A previous version of this article incorrectly stated that some of the energy produced would be exported out of Nevada.