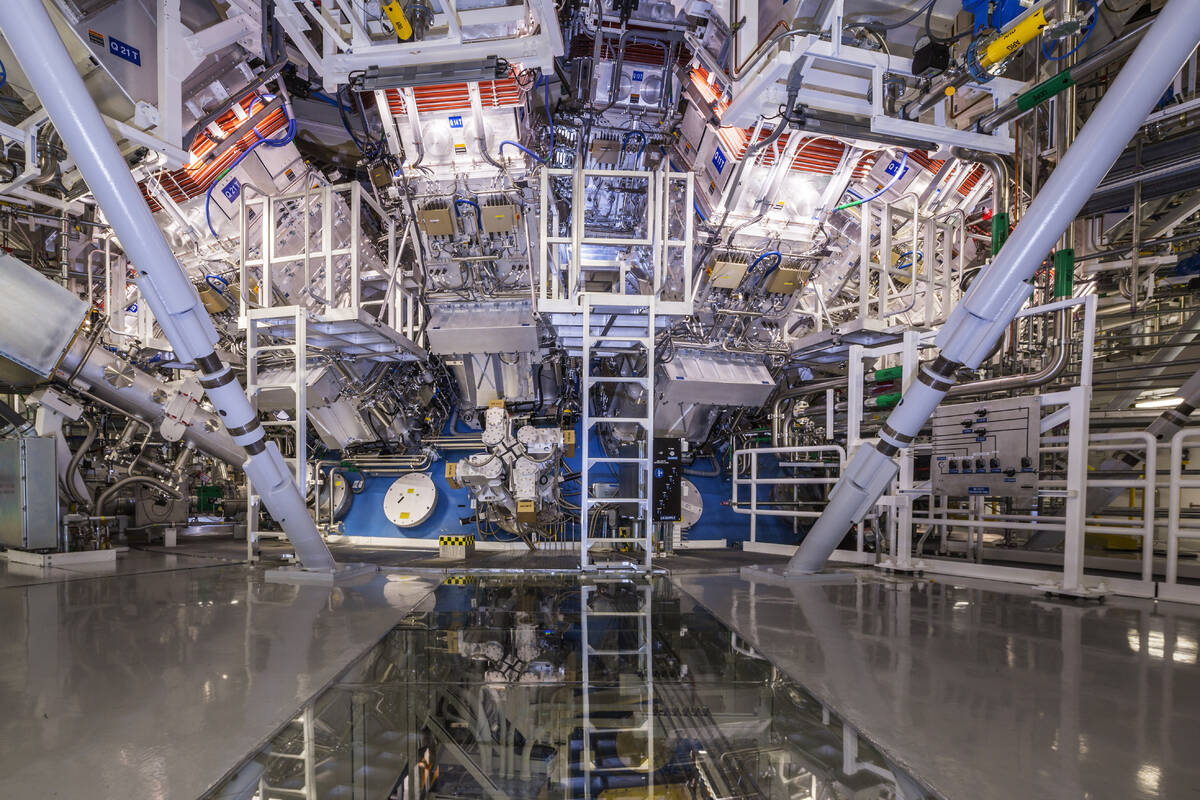 FILE - This undated image provided by the National Ignition Facility at the Lawrence Livermore National Laboratory shows the NIF Target Bay in Livermore, Calif. The system uses 192 laser beams converging at the center of this giant sphere to make a tiny hydrogen fuel pellet implode. Officials at the Department of Energy say on Tuesday, Dec. 13, 2022, there will be an announcement of a “major scientific breakthrough” on nuclear fusion. (Damien Jemison/Lawrence Livermore National Laboratory via AP, File) 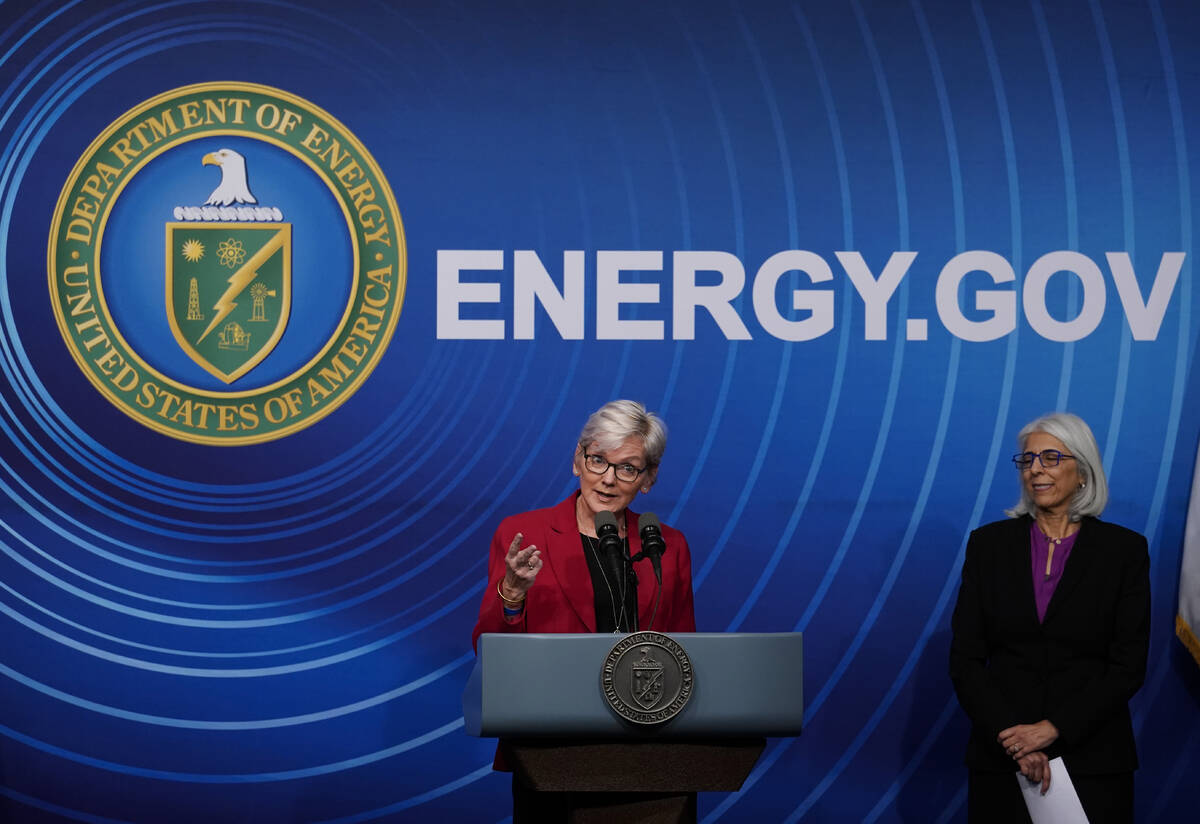 Secretary of Energy Jennifer Granholm, joined at right by Arati Prabhakar, the president's science adviser, announces a major scientific breakthrough in fusion research that was made at the Lawrence Livermore National Laboratory in California, during a news conference at the Department of Energy in Washington, Tuesday, Dec. 13, 2022. (AP Photo/J. Scott Applewhite) 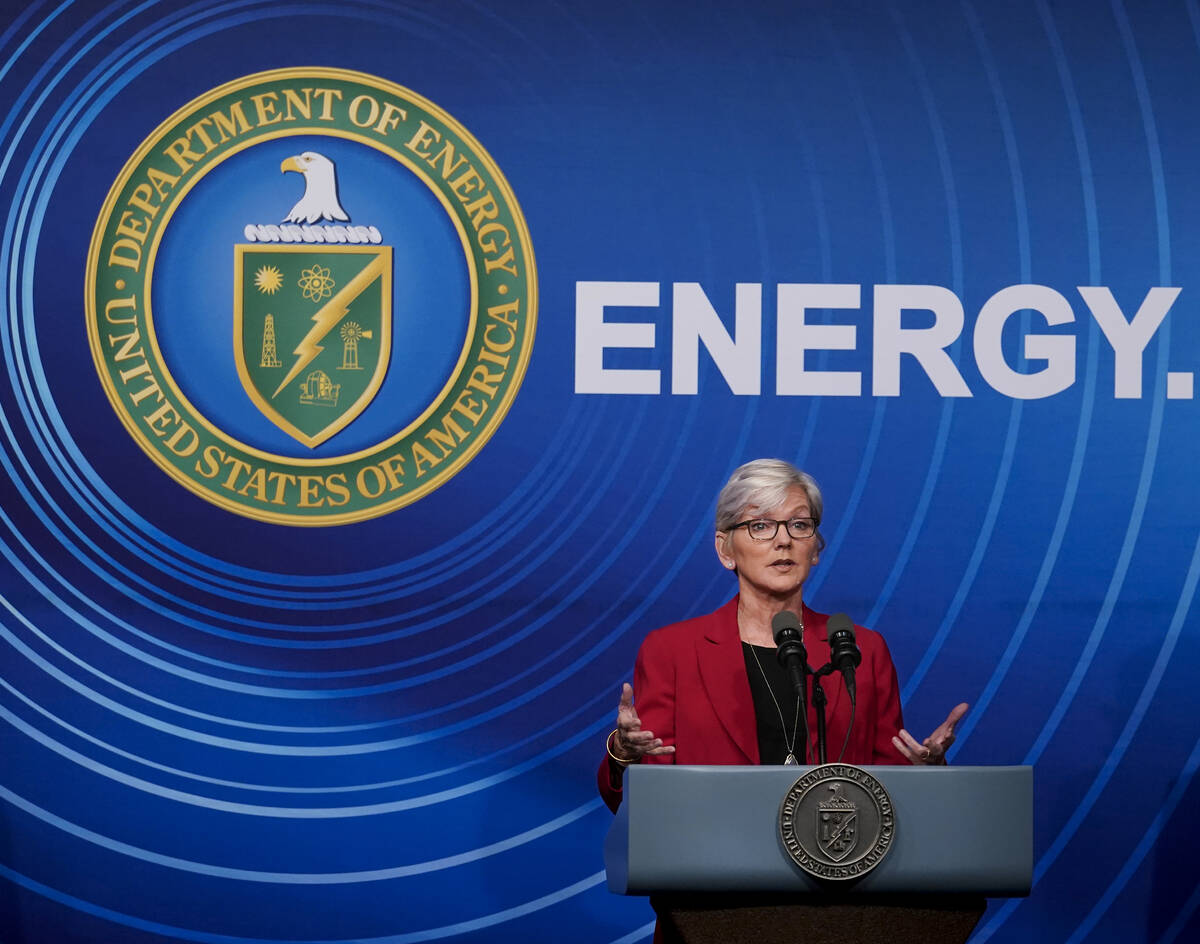 Secretary of Energy Jennifer Granholm announces a major scientific breakthrough in fusion research that was made at the Lawrence Livermore National Laboratory in California, during a news conference at the Department of Energy in Washington, Tuesday, Dec. 13, 2022. (AP Photo/J. Scott Applewhite) 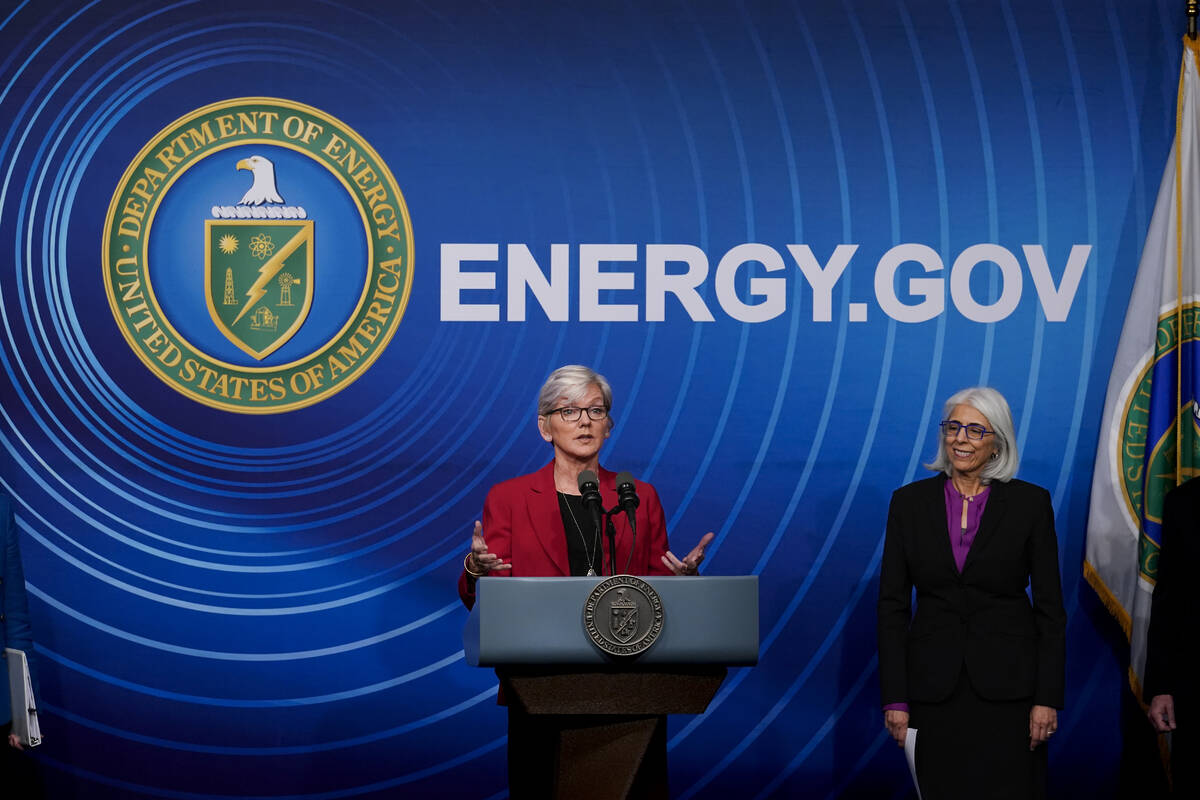 Secretary of Energy Jennifer Granholm, joined at right by Arati Prabhakar, the president's science adviser, announces a major scientific breakthrough in fusion research that was made at the Lawrence Livermore National Laboratory in California, during a news conference at the Department of Energy in Washington, Tuesday, Dec. 13, 2022. (AP Photo/J. Scott Applewhite)

WASHINGTON — Energy Secretary Jennifer Granholm announced a “major scientific breakthrough” Tuesday in the decades-long quest to harness fusion, the energy that powers the sun and stars.

Researchers at the Lawrence Livermore National Laboratory in California for the first time produced more energy in a fusion reaction than was used to ignite it, something called net energy gain, the Energy Department said.

The achievement will pave the way for advancements in national defense and the future of clean power, Granholm and other officials said.

“This is a landmark achievement for the researchers and staff at the National Ignition Facility who have dedicated their careers to seeing fusion ignition become a reality, and this milestone will undoubtedly spark even more discovery,” Granholm said at a news conference in Washington. The fusion breakthrough “will go down in the history books,” she said.

White House science adviser Arati Prabhakar, appearing with Granholm, called the fusion ignition “a tremendous example of what perseverance really can achieve” and “an engineering marvel beyond belief.”

Proponents of fusion hope that it could one day produce nearly limitless, carbon-free energy, displacing fossil fuels and other traditional energy sources. Producing energy that powers homes and businesses from fusion is still decades away. But researchers said it was a significant step nonetheless.

“It’s almost like it’s a starting gun going off,” said Professor Dennis Whyte, director of the Plasma Science and Fusion Center at the Massachusetts Institute of Technology and a leader in fusion research. “We should be pushing towards making fusion energy systems available to tackle climate change and energy security.”

Net energy gain has been an elusive goal because fusion happens at such high temperatures and pressures that it is incredibly difficult to control.

Fusion works by pressing hydrogen atoms into each other with such force that they combine into helium, releasing enormous amounts of energy and heat. Unlike other nuclear reactions, it doesn’t create radioactive waste.

Billions of dollars and decades of work have gone into fusion research that has produced exhilarating results — for fractions of a second. Previously, researchers at the National Ignition Facility, the division of Lawrence Livermore where the success took place, used 192 lasers and temperatures multiple times hotter than the center of the sun to create an extremely brief fusion reaction.

The lasers focus an enormous amount of heat on a small metal can. The result is a superheated plasma environment where fusion may occur.

Riccardo Betti, a professor at the University of Rochester and expert in laser fusion, said an announcement that net energy had been gained in a fusion reaction would be significant. But he said there’s a long road ahead before the result generates sustainable electricity.

He likened the breakthrough to when humans first learned that refining oil into gasoline and igniting it could produce an explosion.

The net energy gain achievement applied to the fusion reaction itself, not the total amount of power it took to operate the lasers and run the project. For fusion to be viable, it will need to produce significantly more power and for longer.

It is incredibly difficult to control the physics of stars. Whyte said it has been challenging to reach this point because the fuel has to be hotter than the center of the sun. The fuel does not want to stay hot — it wants to leak out and get cold. Containing it is an incredible challenge, he said.

Net energy gain isn’t a huge surprise from the California lab because of progress it had already made, according to Jeremy Chittenden, a professor at Imperial College in London specializing in plasma physics.

“That doesn’t take away from the fact that this is a significant milestone,” he said.

It takes enormous resources and effort to advance fusion research. One approach turns hydrogen into plasma, an electrically charged gas, which is then controlled by humongous magnets. This method is being explored in France in a collaboration among 35 countries called the International Thermonuclear Experimental Reactor as well as by researchers at the Massachusetts Institute of Technology and a private company.