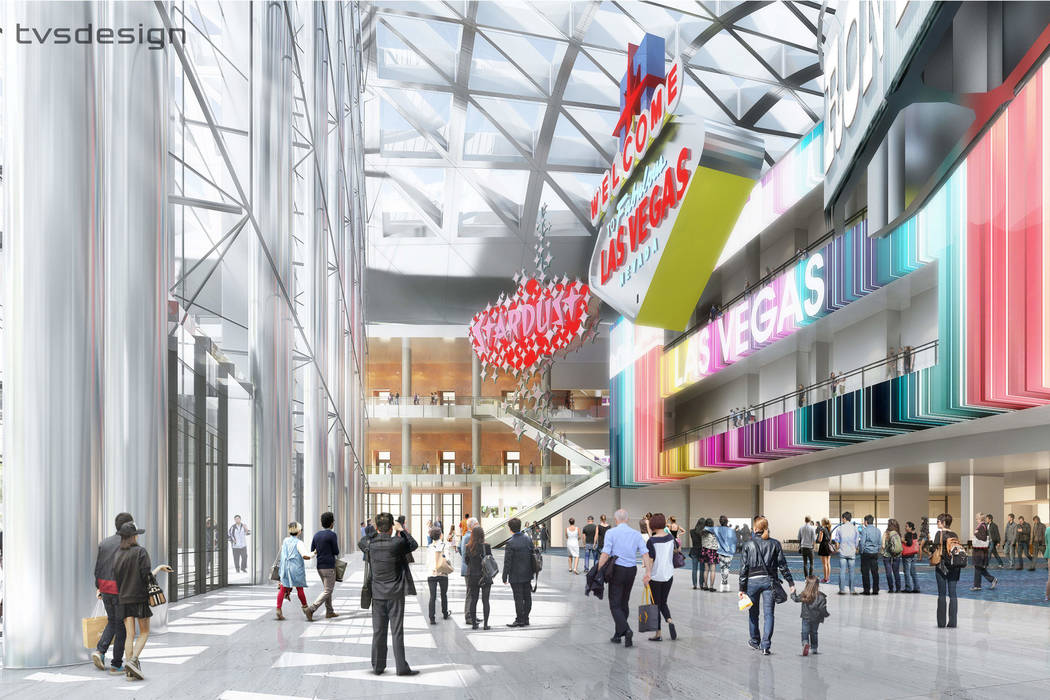 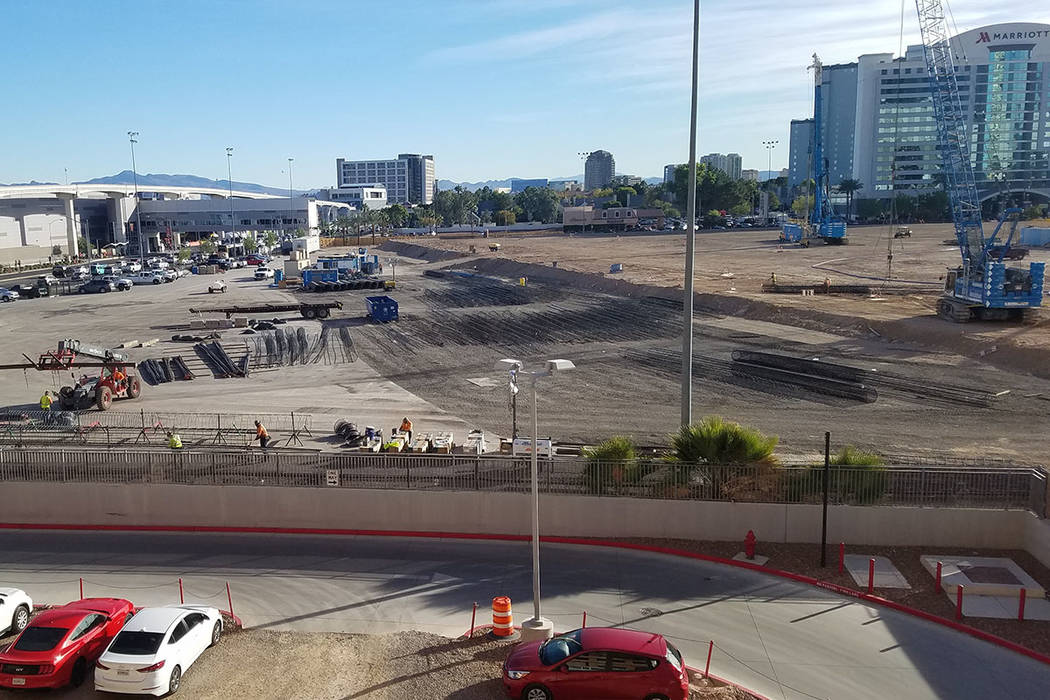 Crews work on the foundation of the Las Vegas Convention and Visitors Authority's $935.1 million convention center expansion on Wednesday, Oct. 31, 2018, on the north end of the construction site, which formerly was used as a parking lot. (Richard N. Velotta, Las Vegas Review-Journal; @RickVelotta)

The LVCVA board will consider purchasing power from an alternative provider, according to CEO Steve Hill. The departure would include the Las Vegas Convention Center and its $935 million, 1.4 million-square-foot expansion, scheduled to be completed by January 2021.

Hill said the authority wants to save money and use a provider that offers more renewable resources.

Taking off for Tenaska

The authority’s convention center isn’t the only big project interested in using an alternative energy provider. The 1.75 million-square-foot Las Vegas stadium filed for permission to use another provider in September, and the 400,000-square-foot MSG Sphere project filed in October.

The authority had not submitted any formal paperwork with the Public Utilities Commission as of Friday afternoon regarding its interest in departing, but it has taken steps to notify related entities.

The authority submitted a letter of intent Dec. 30 to the commission’s regulatory operations staff, NV Energy and the Bureau of Consumer Protection, saying it intends to purchase energy from a new provider for both the Las Vegas Convention Center and its expansion.

On Jan. 4, the LVCVA met with PUC staff, NV Energy and the BCP to discuss the authority’s intentions and identify any “issues of concern,” according to board agenda documents. It also has stated plans to officially apply for permission to purchase power through Texas-based Tenaska Power Services Co. before Tuesday’s board meeting.

“LVCVA staff executed a non-binding Letter of Intent with Tenaska for the delivery of purchase of energy,” according to agenda documents. “The opportunity exists for energy purchase contract options with Tenaska to provide up to 100 (percent) renewable energy alternatives.”

Tenaska is one of the largest private energy companies in the country, with more than 32,000 megawatts of generating assets, and is a “major player in the growing wind generation industry,” according to its website.

If the LVCVA were to gain PUC permission to exit NV Energy, it would have to pay an exit fee. Other companies’ exits have come with a large price tag; MGM Resorts International, which left NV Energy in 2016, paid $86.9 million in exit fees, and Caesars Entertainment Corp. was assigned $47.5 million in exit fees in 2018.

Hill said NV Energy already has accounted for the convention center’s expansion in its planning, so the LVCVA will not argue for a reduced exit fee. The Las Vegas stadium avoided paying an impact fee because it is under construction and never established permanent electric service with the utility.

NV Energy still on the table

The board also is expected to consider giving CEO Steve Hill authorization to negotiate with NV Energy.

The staff hopes negotiations would allow the LVCVA to reduce its energy costs and use more renewable energy through the monopoly utility, according to agenda documents.

“We either leave the grid and go with an alternative energy supplier, go down the path with NV Energy or stay with the current situation,” Hill said.

NV Energy spokeswoman Jennifer Schuricht said the company will work closely with the LVCVA “to offer solutions in order to keep them as a fully bundled customer.”

If the board approved moving negotiations forward with both NV Energy and Tenaska, the LVCVA said it would pursue both options and make a decision between providers at a later time.

“We’ll have clarity as to what those options completely look like, what the costs of the options would be, and we’d come back to our board with a recommendation,” Hill said.

The Review-Journal is owned by the family of Las Vegas Sands Corp. Chairman and CEO Sheldon Adelson. The MSG Sphere is a partnership between Las Vegas Sands and Madison Square Garden.